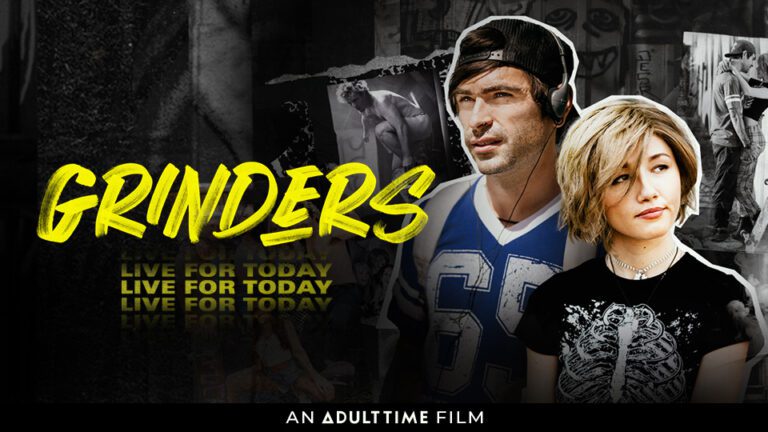 Share
Facebook Twitter LinkedIn Pinterest Email
(Montreal, QC / May 31, 2022) — It’s all hands on deck as Adult Time takes a ride back in time to 1999 in a new original series, Grinders – with Part One, starring Vicki Chase and Tommy Pistol, dropping down the halfpipe Tuesday, May 31.
The four-part feature follows Lucky Fate as a skater kid in late ‘90s Los Angeles who has the potential and talent to go far, but is stuck in a dead-end life amongst his coterie of criminally delinquent friends. Reconnecting with former high-school friend Morgan (Maya Woulfe), he sees an opportunity to start fresh with her out in Texas rather than stay and follow in the footsteps of his deadbeat dealer dad (Pistol).
“What’s great about this story, set on New Year’s Eve 1999 right on the cusp of Y2K, is not only its nod to the past and ‘Live for Today’ attitude, but also the idea of hope and new beginnings for the future,” said director Ricky Greenwood. “Despite its dramatic theme, we had so much fun shooting this film and hope that Adult Time members enjoy the bit of nostalgia as well.”
Adult Time’s Director of Marketing, Frank Stacy, had this to say about the project: “The entire team loves working with Ricky on these films, because he has such a wild imagination and an out-of-the-box approach to adult content. ‘Grinders’ is unlike anything else in the current porn landscape and mix top-notch cinematography, inspired visuals and scorching hot sexual performances. This is definitely something that will get people talking!”
Grinders also stars Charlotte Sins, Vanna Bardot, Lilly Bell, Robby Echo, Nathan Bronson, and is available at GrindersFilm.com and on the Adult Time streaming platform at AdultTime.com, home to more than 59,000 scenes, 320 channels and 8 new releases per day of the network’s award-winning brands.
About Adult Time:
Launched in 2018, Adult Time is a streaming service exclusively for adults. Created by award-winning filmmaker Bree Mills, who also serves as Chief Creative Officer, Adult Time is a platform built by fans who believe in a future where mature audiences can safely, securely and proudly have a place in their lineup for premium adult content.
Dubbed the ‘Netflix of Porn’ by mainstream media outlets, Adult Time offers an extensive catalog of more than 320 channels, 59,000 episodes and 8 new releases per day from the industry’s most recognized studios, including Girlsway, Pure Taboo, Burning Angel, Fantasy Massage, 21 Sextury and Vivid Entertainment alongside exclusive original series, feature films and much more.
For more information, please visit:  http://www.adulttime.com
Follow on Twitter & Instagram: @adulttimecom @thebreemills
Media Inquiries: Brian Gross, BSG PR 818-340-4422 brian@bsgpr.com
# # #
21 Sextury adult time bree mills brian gross burning angel Fantasy Massage Frank Stacy girlsway Grinders Pure Taboo tommy pistol Vicki Chase Vivid Entertainment
Share. Facebook Twitter Pinterest LinkedIn Tumblr Email
Previous ArticleLixxx N Lace “Get you Lixxx N Lace in the same place”
Next Article The best destinations to indulge in gambling across the world