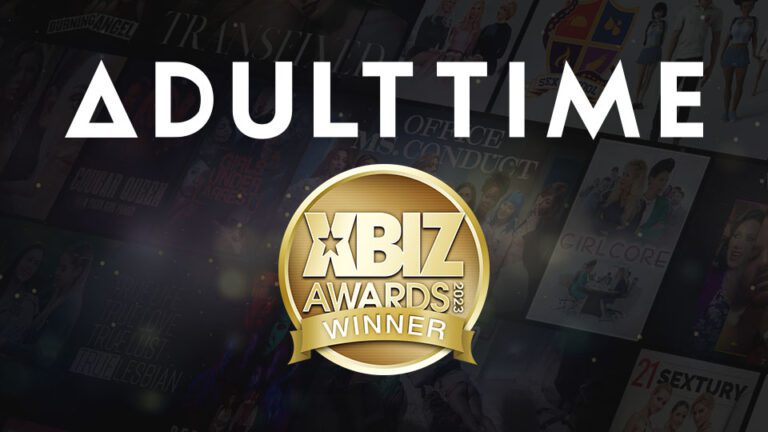 Share
Facebook Twitter LinkedIn Pinterest Email
(Montreal, QC / January 17, 2023) — Adult Time is celebrating a successful year in films with five 2023 XBIZ Award wins in five different categories, including the coveted Studio of the Year prize.
The popular streaming giant and production brand proudly took home the trophy for its darkly decadent Web Series of the Year, Modern Day Sins; Transfixed signature series Muses was honored with a Best Sex Scene -Trans award for its leading ladies Eva Maxim and Kira Noir, and Ricky Greenwood’s ‘90s blast from the past Grinders won the Best Cinematography award for the film’s Director of Photograper, Matt Holder
XBIZ also awarded Adult Time favorite Jane Wilde with the Best Acting – Lead prize for her directorial debut with Bree Mills, Stars; based on true events, Wilde’s semi-autobiographical account of her first year in the adult industry is a cautionary tale for newbies taking their first steps in the biz.
“On behalf of the entire AT team and all our talented creators, we want to thank XBIZ for the recognition once again this year,” said Bree Mills, who serves as Chief Creative Officer for Adult Time. “We also want offer our congratulations to all the deserving winners this year.  It’s a wonderful era to be producing high quality adult content and we are proud to be part of it!”
The award-winning AdultTime.com streaming platform is home to more than 360 channels, 61,000 episodes and 8 new releases per day from some of the most recognized and respected studios in the industry.
ABOUT ADULT TIME:
Launched in 2018, Adult Time is a streaming service exclusively for adults. Created by award-winning filmmaker Bree Mills, who also serves as the brand’s Chief Creative Officer, Adult Time is a platform built by fans who believe in a future where mature audiences can safely, securely and proudly have a place in their lineup for premium adult content.
Dubbed the ‘Netflix of Porn’ by mainstream media outlets, Adult Time offers an extensive catalog of more than 360 channels, 61,000 episodes and 8 new releases per day from some of the most recognized studios, including Girlsway, Pure Taboo, Burning Angel, Fantasy Massage, 21 Sextury, and Vivid Entertainment, alongside exclusive original series, feature films, and much more.
For more information, please visit:
http://www.adulttime.com
Follow on Twitter & Instagram:
@adulttimecom
@thebreemills
Media Inquiries:
Brian Gross
BSG PR
818-340-4422
brian@bsgpr.com