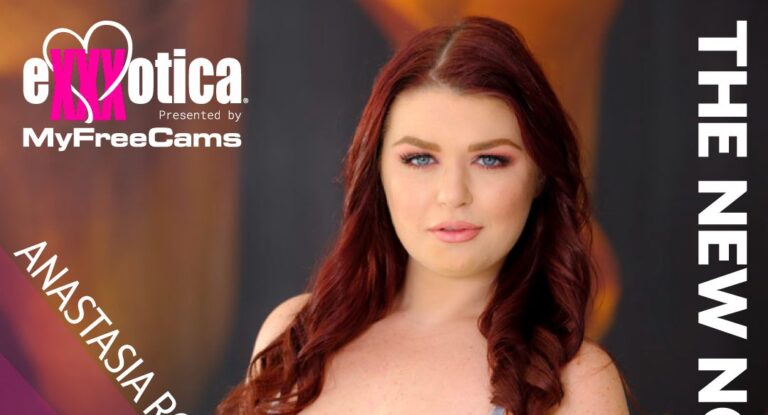 Share
Facebook Twitter LinkedIn Pinterest Email
(Los Angeles, CA) Known for her sexually charged scenes, piercing blue eyes, and all-natural body that won’t quit, Anastasia Rose loves engaging her fans. This weekend she’ll be doing just that with her appearance at EXXXOTICA Miami. It’s been a few years since she’s done a tradeshow, but all that will change this weekend.
This Friday, July 15th through Sunday, July 17th, EXXXOTICA is taking over Miami, and it will be standing room only with the expo full of adult stars, creators, cam models, and fans. Anastasia Rose will have her own model booth and appear all three days of the expo. Fans can meet her and pay to take a selfie with her. Her booth will be one of the most exciting at the show, since she’ll have a spinning wheel, where fans can buy tickets and win prizes. Anastasia will also have DVDs, used clothing, and 8x10s for sale and will autograph any items her fans purchase.
“I’m so excited to be back in adult and doing my first tradeshow in a long time! I can’t wait to interact with my fans in real life. Social media is great, but definitely not the same. If you’re planning on coming to the show, come by, get a selfie, spin the wheel, and/or purchase my merch,” says Anastasia Rose.
Show hours are Friday 6pm to 11pm, Saturday 2pm to 10pm, and Sunday 1pm to 6pm. EXXXOTICA is taking place at the Miami Airport Convention Center located at 711 NW 72nd Ave. For more info about the expo and to buy tickets, go to exxxoticaexpo.com/location/miami-f.
Get Anastasia on your set by contacting Robert Moran at robert@101modeling.com or 323.217. 6975 or Fran Amador at fran@101modeling.com or 818.800.0625. View her new agency photos on 101 Modeling’s site at 101modeling.com/site/talent/view.php?t_id=1182&pageType=profile.
Interview Anastasia Rose for your site, publication, or show by contacting Erika Icon of The Rub PR at erika@therubpr.com.
ABOUT ANASTASIA ROSE
With piercing blue eyes, gorgeous red hair, an all-natural body that won’t quit, and over the top, sexually-charged scenes, Anastasia Rose built a name for herself and a legion of worldwide fans. Recently, she returned to the adult realm with a new look and attitude and is ready for a takeover of epic proportions.
Anastasia’s worked with all the top shelf and independent studios on the East and West Coasts and Eastern Europe and scored dozen of covers, including Evil Angel, Kink.com, Hustler, MOFOs, Sweet Sinner, New Sensations, Swallowed, Reality Kings, BaDoink, True Anal, PervCity, Team Skeet, Girlfriends Films, Desperate Pleasures, Blazed Studios, Cherry Pimps, Bang.com, Crave Media, WhyNotBi, Evolved Fights, and Legal Porno.
The industry has also taken notice of her stellar work. She’s received nominations from the AVN Awards for Most Epic Ass and Favorite Indy Clip, and her scene work has been nominated multiple times. Anastasia scored tons of Spank Bank Awards noms and won Best Spitter/Droller and Best Cum Glazed Gaze in 2019. She’s graced the pages of Beaver Hunt and Hustler and grabbed mainstream media attention from Vice with her thoughts on how to have great anal sex.
Anastasia loves her fans and does respond to them on social media. Make sure you’re following her on Twitter @anastasiarosexx and Instagram @fav.girlnextdoor. Get a replica of her infamous vajayjay at mypornboutique.com/anastasia-rose-pussy.html. Go BTS on set and see what her daily life is like by subscribing to her OnlyFans onlyfans.com/anastasiarosexxx. Buy her clips a la carte on  ManyVids manyvids.com/Profile/791311/Anastasia-Rose/Store/Videos. Talk dirty to her and sext with her on SextPanther sextpanther.com/AnastasiaRose. Catch her live on cam on Chaturbate chaturbate.com/anastasiaroseoffical. And find out why she has 25 million views and her 40k Pornhub subscribers can’t get enough of her at pornhub.com/pornstar/anastasia-rose. Subscribe for free for updates on new content, and watch and “like” her videos.
8x10s adult stars Anastasia Rose autograph booth cam models clothing creators DVDs expo EXXXOTICA fans games Miami prizes selfies show hours tradeshow
Share. Facebook Twitter Pinterest LinkedIn Tumblr Email
Previous ArticleJoslyn Jane Set to Appear at EXXXOTICA for the 1st Time This Weekend
Next Article We’re Back In Miami This Weekend