As Ball Drop Approaches, Slayer Spotlights And Now We Drink’s Best of 2022 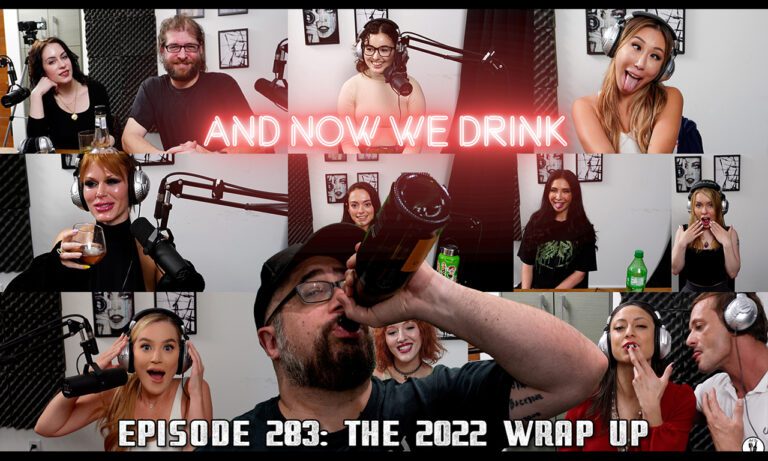 Share
Facebook Twitter LinkedIn Pinterest Email
(LOS ANGELES, Calif. / December 30, 2022) — Matt Slayer has released a special year-end retrospective episode of his popular “And Now We Drink” podcast, now streaming — and if there’s a God, He just took off His shades and stepped back.
“And Now We Drink” is like “the conversation at the end of the bar” featuring your favorite comedians, musicians, writers, actors and adult performers.
The new episode, a rip-roaring compilation of fan favorite 2022 highlights, features unforgettable clips of Casca Akashova, Blake Blossom, Sophia Burns, Anna de Ville, Cassie Del Isla & Dorian Del Isla, Nicole Doshi, Leana Lovings, Keely Rose, Haley Spades, Peter Warren and Jane Wilde.
“It’s another year in the can drinking buddies, and what a wild, action-packed ride of a year 2022 was,” Slayer remarked.
“I’m thrilled that new and old drinking buddies joined us on the ride, and I’m looking forward to what 2023 brings. To everyone who’s been a part of ‘And Now We Drink,’ I raise my glass to you.”
The episode’s highlights include: Jane Wilde’s response to being asked about what part of a human she’d eat first on episode 255, Haley Spade sharing wild tales of New Orleans on episode 248, and adult starlet Keely Rose punctuating her appearance on episode 268 by popping her top.
Multi-nominated rising star Leana Lovings, whose February 2022 interview on episode 238 has since become the most watched edition in the show’s nearly seven-year history, commented, “Almost one year ago I joined an episode of the And Now We Drink podcast. It was one of my first interviews as a performer who was just starting out in the industry, and it was so easy to be honest and relaxed! Matt Slayer is wonderful and I’m grateful that our first appearance on his podcast quickly became so well-loved.”
Regarding her ultra-revealing interview on episode 263, adult film superstar Blake Blossom commented, “I’m so happy I could bring my fans to ‘And Now We Drink.’ My conversation with Matt was one of my most open interviews i’ve even given and I’m glad I’ve made a new friend in the process. He has a way with making people comfortable and a genuinely kind vibe to him. I’m looking forward to part 2!”
Casca Akashova remarked about the exchange from episode 244 that is a comic highlight in the year-end wrap-up, “There’s nothing like good company, good drinks, and good conversation . . . and it’s ok when you find out your host cums silently like a girl. I’m cool with that.”
Enjoy the entertaining “And Now We Drink Episode 283: The End of 2022 Wrap-Up” at the program’s official website: www.andnowwedrink.com/episodes, or on these fine platforms:
YouTube: https://www.youtube.com/watch?v=W1or4TGZi5Y
Spotify: https://open.spotify.com/episode/7uYh7Yumazr0bCEzZGGwMw
Apple Podcasts: https://podcasts.apple.com/us/podcast/the-2022-wrap-up/id1110253182?i=1000591643188
The video versions of the “And Now We Drink” podcast are available via Slayer’s Patreon ( patreon.com/mattslayer ) before they hit YoutTube.
Read about the latest news from the “And Now We Drink” show on Twitter: @AndNowWeDrink
Follow the inimitable Matt Slayer on Twitter: @Matt_Slayer
Follow the stars of And Now We Drink’s epic end of 2022 wrap-up episode on Twitter:
@LeanaLovings
@blkblssm
@janewildexxx
@AnnadeVilleXXX
@CAkashova
@KeelyRoseOF
@Cassie_Ibiza
@doriandelisla
@HaleySpades
@sophiaburnsx
@nicoledoshi
@peterwarren
Contact:
Michael Whiteacre
HoneyHouse PR
PR@HoneyHouseXXX.com
775-742-8425
Twitter: @HoneyHousePR
#   #   #
And Now We Drink Ball Drop Matt Slayer Slayer
Share. Facebook Twitter Pinterest LinkedIn Tumblr Email
Previous ArticleSouthwest says operations will return to normal on Friday
Next Article Jade Kush to Greet Fans at AVN Expo in Las Vegas