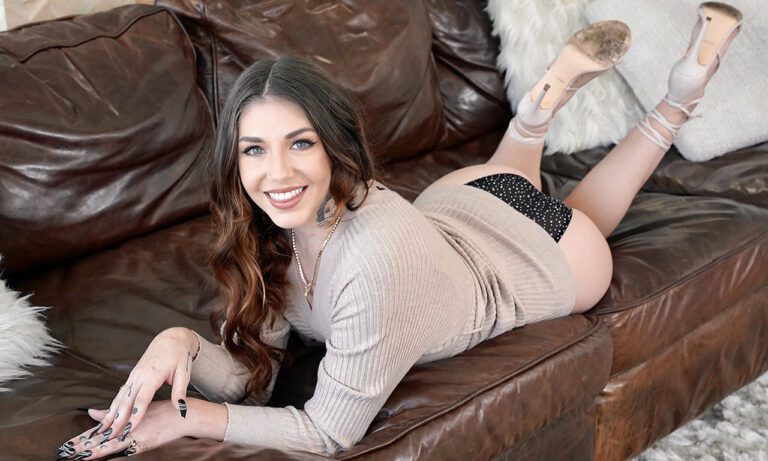 Share
Facebook Twitter LinkedIn Pinterest Email
(LOS ANGELES, Calif. / January 19, 2023) — Surging star Brenna McKenna is accelerating her career momentum with availability for adult video and media opportunities, in the Miami area from January 30th through February 3rd, and in the Los Angeles and Las Vegas porn production hubs from February 14th though the 28th.
The East Coast-born sexual dynamo, who started performing professionally in 2021 and recently earned the first award nominations of her career, will be available to shoot for studios and professional independent adult film producers, as well as performers looking to create dynamite trade or paid content.
She is available for adult video bookings directly, or via Zen Models, and for media opportunities through HoneyHouse Public Relations: PR@HoneyHouseXXX.com.
McKenna also wishes to alert fans that she stars in two new DVD releases, Pat Myne’s “Oil for Days 4” from Evil Angel (which co-features McKenna on the box cover), and “Double Penetration Galore” from DP Diva.
Being paired with Zac Wilde in the lube-drenched “Oil for Days 4” was “a dream,” McKenna enthused, “as he is so fun and made me feel so hot.  I did also love my look.
“Pat is amazing, and I’m grateful to make it into the DVD!”
See the “Oil for Days 4” trailer at EvilAngelVideo.com.

Of “Double Penetration Galore,” which features the beauty’s first-ever double penetration, McKenna said, “I need to start by thanking Maestro Claudio for shooting me for DP Diva and for including me in this DVD!  Everyone will now be able to see my very first ever double penetration experience. I have to admit that i personally believe that two is better than one and this scene fulfilled my fantasy of having two men absolutely ravage me.

“I have to mention that I was blessed with DP daddies Ramon Nomar and Michael Stefano, two legends who handled my holes perfectly and worshipped every body part, showing me off to the viewer. They gave me exhilarating first and I’m SO thankful it was caught on camera! thanks again to Claudio and his team for shooting me again.”

Brenna McKenna fans are invited to check her out on FreeOnes: freeones.com/brenna-mckenna.
McKenna treats admirers to an unparalleled level of access via her OnlyFans account, which is updated daily with images and videos that you can’t see on her public accounts.
Read her revealing AdultDVDTalk interview here.
About Brenna McKenna:
One of the most classically beautiful women to ever grace adult films, Brenna McKenna is also a supernova of sexual energy and positive attitude.
Born and raised on the southern end of the great state of New Jersey, Sunday churchgoer McKenna attended a private high school on a softball scholarship before putting herself through college in Philadelphia as a stripper. After earning her business degree in Fashion Industry Management, she realized that she loved exotic dancing so much, she decided to make it her career.
For the 21 year-old, stripping had opened a path on her life’s journey of exploring her hitherto unexcavated sexual powers. But when the COVID pandemic panic came, and gentlemen’s clubs were shuttered, McKenna pivoted to OnlyFans. She eventually reached out to an adult talent agency, and filmed her debut porn scenes in March 2021.
Since then, the magnetic performer has divided her work time between the Los Angeles, Las Vegas and Miami filming hubs, producing her own content and starring in productions by Bang Bros, LeWood, Bang!, Mike Adriano, She Seduced Me, Team Skeet, FreakMob Media, Sex Selector, Perv City, Swallowbay, and many more.
With years of stripping experience under her belt, McKenna has also moved into feature dancing, debuting at New York City’s famed Sapphire 60 gentlemen’s club in June 2022.  In October she was a presenter as the 30th annual NightMoves Awards in Tampa, Florida, and she returned to New York City to headline Sapphire Times Square in December.
She was recently nominated for Hottest Newcomer and Best Oral Sex Scene in the 2023 AVN Awards.
McKenna resides in Philadelphia.
Contact:
Michael Whiteacre
HoneyHouse PR
PR@HoneyHouseXXX.com
775-742-8425
Twitter: @HoneyHousePR
#   #   #
Brenna McKenna Zen Models
Share. Facebook Twitter Pinterest LinkedIn Tumblr Email
Previous ArticleParadise Marketing’s Dennis Paradise Lauded with XBIZ Industry Legacy Award
Next Article SIGN Award 2022: ORION Wholesale awarded “Wholesaler of the Year”