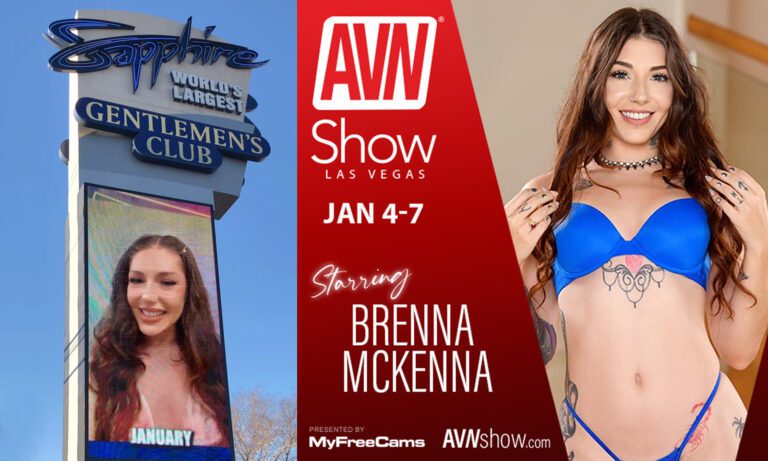 Share
Facebook Twitter LinkedIn Pinterest Email
(LAS VEGAS, Nev. / January 3, 2023) — Adult film sensation Brenna McKenna is thrilled to announce that she will be greeting fans at her very first AVN Adult Entertainment Expo (AEE) this week, as well as headlining the Sapphire Las Vegas gentleman’s club for two shows on Friday, Jan 6.
And, as if to say that the rising star has finally “arrived,” video of McKenna and three other popular adult star feature dancers are playing around the clock on Sapphire’s huge, high-visibility electronic billboard, within sight of adult industry members and fans arriving to take part in the AVN Expo.
On this particular visit to Sin City, the East-Coast born sexual dynamo is celebrating the first award nominations of her skyrocketing career, from the 2023 AVN Awards.
McKenna received a nod for Best Oral Sex Scene for her exceptionally messy performance in “A Lady With a Schedule” from Team Skeet’s This Girl Sucks sub-site.
The powerhouse performer is also up for Hottest Newcomer in the AVN Awards’ Fan Voting competition, in which admirers can vote daily for her here ( https://avn.com/awards/voting/hottest-newcomer ).
The world-famous AVN Adult Entertainment Expo is more than just a convention: it’s a sexy extravaganza amidst rows of slot machines, salesmen and spermatobibulous starlets. The show, which bows at Resorts World this year, will be capped off by the 40th annual AVN Awards on January 7, which McKenna will walk ten red carpets.
“I simply can’t wait to meet more fans at my first AVN Show, where I also get to be surrounded by amazing fellow performers and celebrate my journey so far,” said McKenna. “I have come a long way from Catholic school!

McKenna is scheduled to sign autographs and pose for photos on the expo floor all four days.  Her AEE signing schedule is as follows (Subject to Change):

Purchase AEE passes online:
Fans:  tinyurl.com/avnexpo
Industry: tinyurl.com/avnindustry
Resorts World Las Vegas is located at 3000 S Las Vegas Blvd, Las Vegas, NV 89109
And if McKenna’s AEE appearances aren’t enough for her army of fans, on Friday the beauty will make her Sin City feature dancing debut at Sapphire Las Vegas, on a double bill with adult film superstar jessica drake.
Two captivating personalities . . . two shows each . . . as the pulse of the night beats with all of its might!
McKenna said she looks forward to celebrating this special season with her fans at Sapphire Las Vegas during her very first AVN show.
“Never had I dared to imagine this being my life,” McKenna said. “Feature dancing and walking red carpets and doing meet and greets — and I want to thank my fans for loving me!”
Sapphire Las Vegas is conveniently located just across the street from the AEE venue, at 3025 Sammy Davis Jr. Drive.
For more information about McKenna’s debut appearance at Sapphire Las Vegas, the club’s VIP amenities, call (702) 637-0790.
Learn more about Brenna McKenna and jessica drake’s special appearance here ( https://sapphirelasvegas.com/event/brenna-mckenna-jessica-drake-live-at-sapphire-adult-expo-weekend/ ).
Visit Sapphire Las Vegas on the web at ttps://www.sapphirelasvegas.com/ or follow the club on Twitter @SapphireLV702.

Brenna McKenna fans are invited to check her out on FreeOnes: freeones.com/brenna-mckenna.
McKenna treats admirers to an unparalleled level of access via her OnlyFans account ( https://onlyfans.com/brennamckenna ), which is updated daily with images and videos that you can’t see on her public accounts.
Read her revealing AdultDVDTalk interview here ( https://interviews.adultdvdtalk.com/brenna-mckenna/ ).

Brenna McKenna is available for professional bookings directly, or via Zen Models ( https://zenmodels.net/our-models/brenna-mckenna/ ).

She is represented by The Lee Network ( https://theleenetwork.com/) for feature dance appearances.

About Brenna McKenna:
One of the most classically beautiful women to ever grace adult films, Brenna McKenna is also a supernova of sexual energy and positive attitude.
Born and raised on the southern end of the great state of New Jersey, Sunday churchgoer McKenna attended a private high school on a softball scholarship before putting herself through college in Philadelphia as a stripper. After earning her business degree in Fashion Industry Management, she realized that she loved exotic dancing so much, she decided to make it her career.
For the 21-year-old, stripping had opened a path on her life’s journey of exploring her hitherto unexcavated sexual powers. But when the COVID pandemic panic came, and gentlemen’s clubs were shuttered, McKenna pivoted to OnlyFans. She eventually reached out to an adult talent agency and filmed her debut porn scenes in March 2021.
Since then, the magnetic performer has divided her work time between the Los Angeles, Las Vegas and Miami filming hubs, producing her own content and starring in productions by Bang Bros, LeWood, Bang! Mike Adriano, She Seduced Me, Team Skeet, FreakMob Media, Sex Selector, Perv City, Swallowbay, and many more.
With years of stripping experience under her belt, McKenna has also moved into feature dancing by signing with industry leader The Lee Network and debuting at New York City’s famed Sapphire 60 gentlemen’s club in June 2022.  In October she was a presenter as the 30th annual NightMoves Awards in Tampa, Florida, and she returned to New York City to headline Sapphire Times Square in December.
She is currently nominated for Hottest Newcomer and Best Oral Sex Scene in the 2023 AVN Awards.
McKenna resides in Philadelphia.
Contact:
Michael Whiteacre
HoneyHouse PR
PR@HoneyHouseXXX.com
775-742-8425
Twitter: @HoneyHousePR
#   #   #
AVN Awards AVN Show Brenna McKenna Zen Models
Share. Facebook Twitter Pinterest LinkedIn Tumblr Email
Previous ArticleZen Models Celebrates 2022 Success, Heads to AVN Expo with Multitude of Stars
Next Article Exclusive at ORION Wholesale: Lifestyle lingerie from kissable