Share
Facebook Twitter LinkedIn Pinterest Email
(NEW YORK, NY. / August 31, 2022) — Brett Rossi is pleased to announce her return to feature dancing with a special one-night engagement at the upscale Sapphire 39 gentlemen’s club in New York, City, Friday, September 2.
The celebrated adult film star and model last appeared at Sapphire 39 in October 2019, and Friday’s show marks the start of her first feature dance tour since 2020.
Last week, Rossi wrote on Twitter that her long-awaited feature tour will include a stop in Philadelphia this month, in addition to other soon-to-be-announced dates to close out the year.
“Sapphire is one of my favorite clubs to dance at because they are so incredibly organized and professional,” said Rossi.  “On top of that, my fans are always so enthusiastic about me being on the east coast.
“I’m definitely looking forward to my first feature dance appearance since 2020, but most importantly, at one of my favorite clubs — Sapphire 39!”
California native Rossi built her own career from the ground up: a teen runway model who transitioned to the adult industry after being discovered by Playboy’s Hugh Hefner at 18 years old, Rossi has faced extreme scrutiny by the mainstream media due to her high-profile career and relationships. Named a Playboy Cyber Girl and Penthouse Pet, crowned Miss Howard [Stern] TV and selected as AVN Awards trophy girl, Rossi signed an exclusive contract for girl/girl scenes with Twistys, and later with Kayden Kross’ TrenchcoatX to shoot her first boy/girl performances. In 2018, she was admitted into the elite Vixen Angel sisterhood by Greg Lansky’s famed luxury brand. 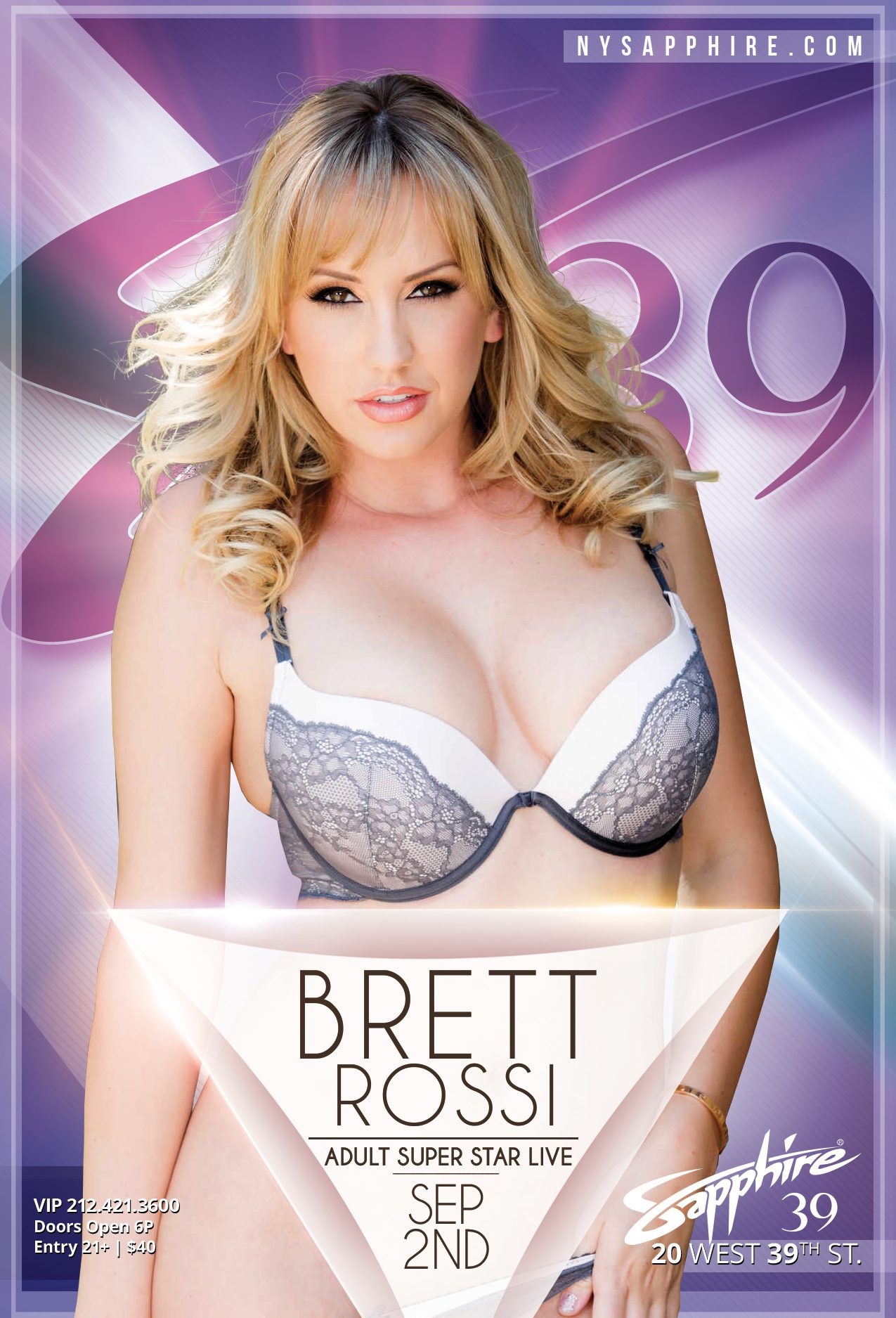 After her Friday night dance performance, the adult superstar will also hold a meet and greet session. Fans will be able to get an autograph or picture with the magnetic performer, as well as purchase some of her keepsake collectible merchandise.
Sapphire 39 is located at 20 West 39th Street, New York, NY 10018, and is open weekdays from 6 p.m. to 4 a.m., and from 7:30 p.m. to 4 a.m. on Saturday nights.  Proper ID & attire required.  Call (212) 421-3600 for information.
The city’s premier gentlemen’s club located in Midtown Manhattan, Sapphire 39 offers deluxe amenities including designer suites with private butlers, concierge services, great food, and varying themes to satisfy every indulgence. With 10,000 square feet of space, 8,000 lovely ladies on staff and all the VIP amenities you could dream of, Sapphire New York is sure to make every man’s fantasies come true.
For more information about Brett Rossi’s September 2 appearance at Sapphire Times Square, or the club’s VIP amenities, visit the club’s website ( https://www.nysapphire.com/NY-Sapphire-39-Adult-Star-Brett-Rossi-Live.html ) or call (212) 421-3600.
To learn about the club’s Adult Star Packages visit here, and book a deluxe VIP package here.
Visit Sapphire 39 on the web at www.nysapphire.com. Follow them on Instagram: @NYSapphire_39 and Twitter @NYSapphire39.
Brett Rossi is represented by The Lee Network for feature dance appearances.  For bookings, please contact The Lee Network by calling (323) 850-6111, or email [email protected].
Follow The Lee Network on its new Twitter account: @LeeNetworkNV,

About The Lee Network:
Since 1989, The Lee Network has been the premier source for adult film stars, having played a leading role in shaping the feature entertainment business of the gentlemen’s club Industry around the globe. From legends of the past to stars of today, including Joanna Angel, Cherie DeVille, Jill Kassidy, Jillian Janson, Nikki Benz, Sarah Jessie, Elena Koshka, Alison Rey, Teal Conrad, Natalia Starr and Brenna McKenna, to top magazine models, showgirls, mainstream celebrities, and reality TV stars, no other agency can boast of such a star-studded lineup.
The company’s resources are unmatched, and its clients rank among the very best, most well-established and respected club owners and managers in the business — many of whom have worked with The Lee Network for over 15 years!
For a complete list of talent represented by The Lee Network, visit its official site: TheLeeNetwork.com.
Contact:
Michael Whiteacre
HoneyHouse PR
[email protected]
775-742-8425
Twitter: @HoneyHousePR
#  #  #
Brett Rossi City Friday new york Sapphire 39 September 2.
Share. Facebook Twitter Pinterest LinkedIn Tumblr Email
Previous ArticleCarly David of PS: Group is this Week’s Guest on Adult Site Broker Talk
Next Article Pineapple Support To Host ‘Reflecting on Loss’ Support Group