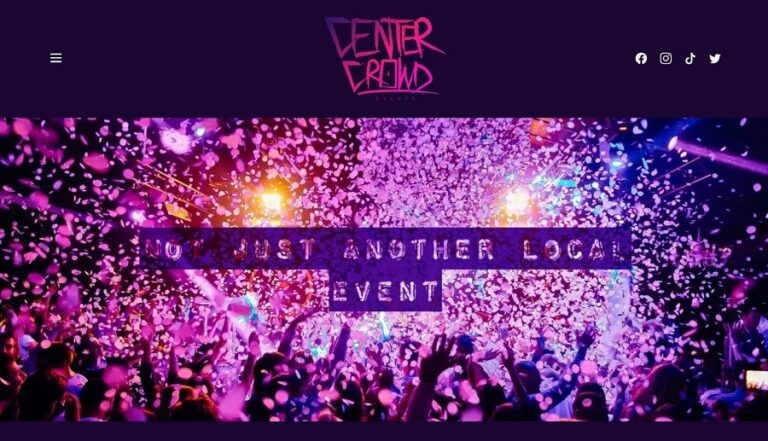 Share
Facebook Twitter LinkedIn Pinterest Email
(Las Vegas, NV / November 28, 2022) — After recently hosting a successful Halloween event in Las Vegas for content creators called ‘Trick or Tease’ (soon to be a YouTube documentary), Brie Nightwood was inspired to make magic on her own with the launch of Center Crowd Events (CenterCrowdEvents.com).
“My friends and I have decided to follow our dreams as concert/event promoters and launch Center Crowd Events with the intention of hosting some amazing raves and music shows in the Las Vegas area,” said Nightwood of her latest venture through her Nightwood Media imprint.
“There is so much overlap between the popular EDM scene and the content creator scene due to like-minded values, so we hope to keep bringing both worlds together in a safe non-judgmental atmosphere.”
Nightwood, who is already in the process of producing Center Crowd’s first shows for local artists and musicians, says that people can check in on updates through the website’s Upcoming Events page, as well as its newly-launched Twitter page.
“Our goal is to reach different types of entertainment in specialty genres that caters to all ages – adult shows, family-oriented shows, you name it! If it’s exciting, unique and interesting, we want to be a part of it,” she added. “Keep a look out for what we have planned next. Stay tuned!”
Visit CenterCrowdEvents.com and follow on Twitter, Instagram, TikTok and Facebook.

In a world of models, influencers and content creators, Brie Nightwood stands out. Sitting pretty atop the 0.1% of OnlyFans stars, the flame-haired beauty is an ambitious and extremely gifted CEO, investor, business owner, gamer and tech wiz.

After getting her first taste of computer skills and creating her first user profile at age 5, Nightwood learned coding languages and ran an eBay business with her parents, and by age 12, she was posting YouTube product demos and selling computer security packages for extra cash. During college, where she earned a degree in Neuropsychology, she joined OnlyFans to earn money while plotting her next entrepreneurial move.

Now with the launch of Nightwood Media, the star has her sights set on NFT, crypto and philanthropic endeavors to further build her empire, while continuing to build and expand her presence in the social media sphere. Nightwood’s dreams don’t stop there: she recently earned her real estate license with the goal of one day becoming a real estate broker that caters specifically to sex workers who have been stigmatized by the mainstream. “I’m still thinking of ways to utilize my skills for the future,” she told Mel Magazine. “I’m always brainstorming business ideas.” To learn more about Brie Nightwood, visit linktr.ee/brienightwood.
# # #
Press and media contact:
Brian S. Gross | BSG PR | 818.340.4422 | brian@bsgpr.com | @bsgpr
Brie Nightwood Center Crowd Events events Las Vegas Music Fans
Share. Facebook Twitter Pinterest LinkedIn Tumblr Email
Previous ArticleCottelli Party: New Eye-Catchers for Hot Party Nights
Next Article Riley Reign is Busting Out with Fresh New Film Scenes to Indulge In