Caitlin Bell Racks Up a Pair of 2023 XBIZ Awards Nominations 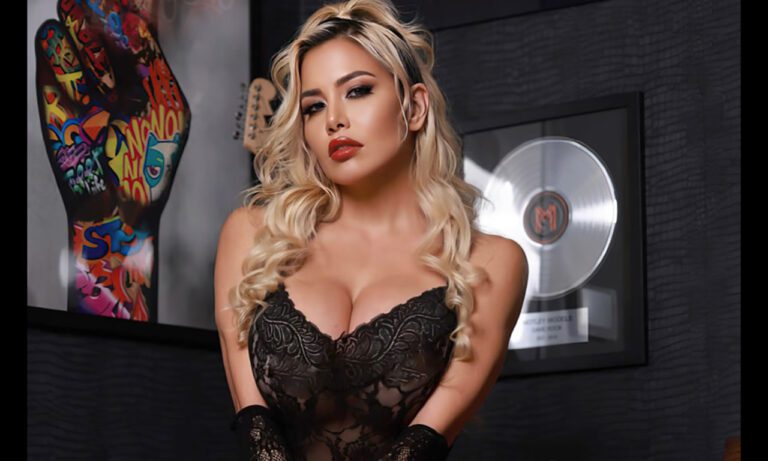 Share
Facebook Twitter LinkedIn Pinterest Email
(LOS ANGELES, Calif. / November 22, 2022) — Caitlin Bell is thrilled to announce that has been honored with her very first XBIZ Awards nominations.
The knockout adult film star and model was recognized in the category of Best Sex Scene — All-Girl for her torrid triad with Madi Meadows and Serene Siren in “Lesbian Triangles 38” (Girlfriends Films), and Best Sex Scene — Vignette for her wild hook-up with Kayley Gunner, Keiran Lee and Van Wylde in “Benefits of Butt Massage” (Brazzers).
“I want to start by saying thank you to XBIZ, as well as to all the on-camera talent and every person who made these nominations possible,” said Bell, who debuted in adult films in 2021. “I’m honored.
“And look at the cast line up for both of these scenes; I mean come on! I was just lucky enough to work with some of the most talented and amazing individuals.
“At Brazzers, I don’t know what was more fun, getting fucked by Kieran Lee and Van Wylde’s fine asses or laughing with Kayley Gunner behind the scenes,” the bombshell mused. “Anyone who knows Kieran or Van know they are complete gentlemen even when they are making me scream.  Kayley Gunner is an A+ plus talent and one of the sweetest people I’ve ever met. She’s not only gorgeous, but the whole package.
“I have to admit, my scene with Serene Siren and Madi Meadows was probably the most nervous I have ever been during my career in adult. It wasn’t supposed to be a threesome, but hey I’m not complaining! It opened my world and taught me so much about lesbian sexuality in one scene. Two absolutely beautiful women who know exactly what they are doing, and how; my heart was pounding the entire time!  Not to mention the fact that I was pulling lashes out of buttholes due to all the oil that was used! [laughs]
“I am immensely grateful, and if the industry will have me, I’ll be around for years to come”

For more information, follow XBIZ on Twitter:@XBIZ.
Also check out Bell’s September 2022 NightMoves Magazine “Entertainer Spotlight” profile here: https://issuu.com/nightmoves/docs/nm_finalpg_1-_80_sept_2022_website/74.
She is represented by AMA Modeling ( https://amamodeling.com/project/caitlin-bell/ ) / @TeamBrian2016 for East Coast shoots, and 101 Modeling ( http://www.101modeling.com/site/talent/view.php?t_id=1400&pageType=profile) / @101ModelingInc for West Coast shoots.
For feature dance appearances, Caitlin Bell may be booked through  The Lee Network ( https://theleenetwork.com/models/caitlin-bell/ ) @LeeNetworkNV, the premier agency for feature entertainers throughout North America.
Keep up with the captivating Caitlin Bell at her her official website CaitlinBellVIP.com, her new Twitter account: @LatinaBellxoxo, and on Instagram: @officialcaitlinbell.
Join Bell’s premium OnlyFans ( https://onlyfans.com/caitlinisnaughty ).
Find exclusive Caitlin Bell goodies for sale at CaitlinBellMerch.com.
About Caitlin Bell:
Of Spanish, Mexican and Native American descent, Caitlin Bell hails from Las Cruces, New Mexico, just across the border from Juarez, Mexico. She studied Human Nutrition and Food Science at New Mexico State University until a visit to Atlanta, Georgia led to an offer to work as a promo model and brand representative for a tequila company.
Bell spent a year traveling to every Spring Break party spot in the U.S., and then settled in Atlanta. After a five-year engagement requiring a stay-at-home suburban lifestyle, the untamable Bell decided to break free — literally — by sneaking out in the middle of the night. 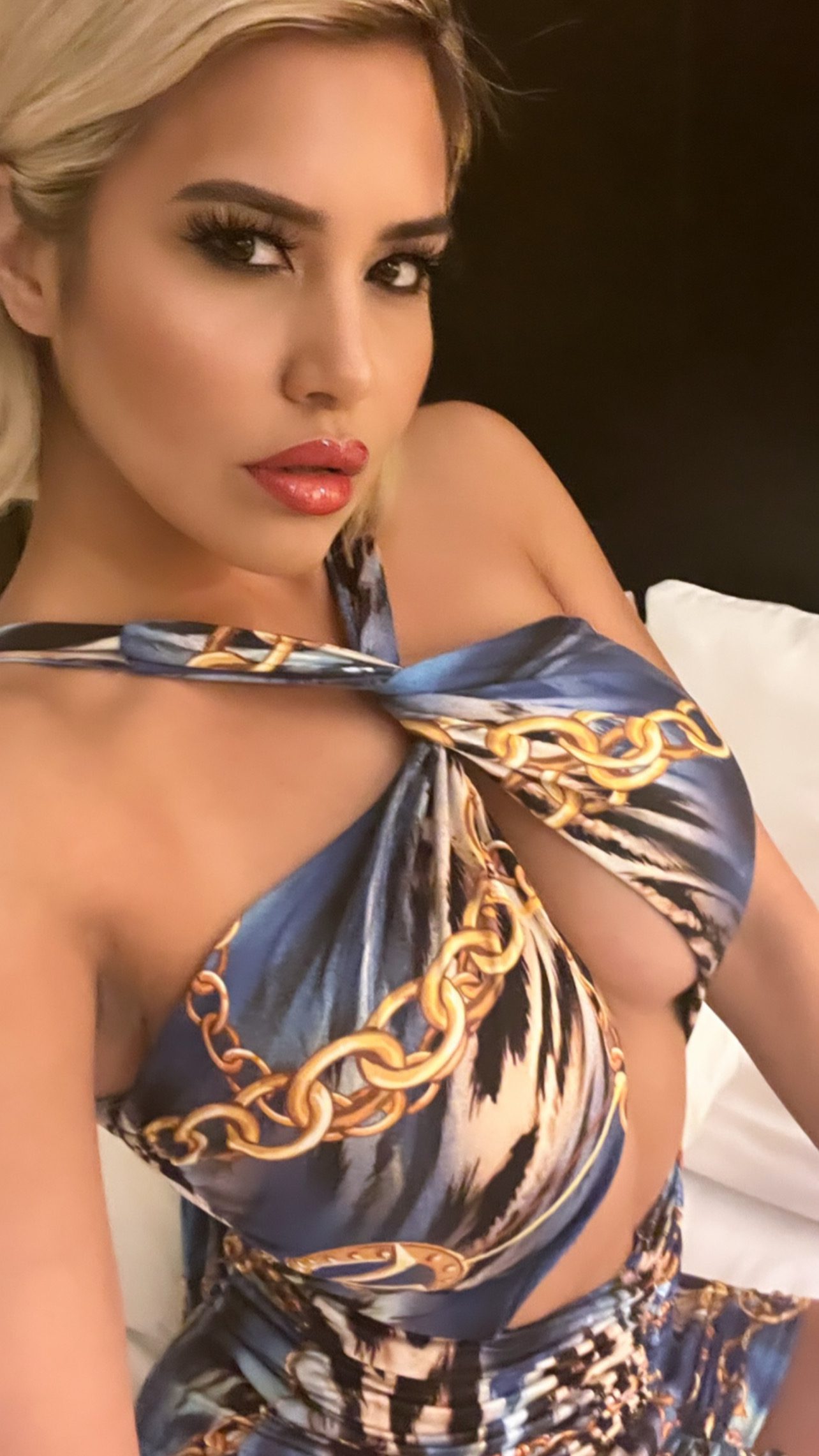 After a two-month flirtation with exotic dancing, Bell decided to celebrate her newly-recovered freedom by traveling the world, with visits to Argentina, Costa Rica, Mexico, Great Britain, France, The Netherlands, and Thailand.
A brown-eyed blonde with a staggering 36D-26-36 figure, in June 2021 her sizzling social media photos caught the eye of a talent recruiter. While visiting Florida, Bell signed on with an adult talent agency, and made her adult movie debut for HotMILFSFuck opposite beloved performer Jake Adams, who was tragically killed in a freeway collision shortly after their scene was released.
A self-described adrenaline junkie, Bell learned that she is a natural in front of the porno lens, and in a very short time, the bombshell shot for top-tier studios such as Brazzers, Reality Kings, Jules Jordan Video, Nympho, WankzVR, PornPros, SexLikeReal, MYLF, BrattyMilf and Team Skeet.
“I’m having the most fun,” Bell said. “The people in adult are more respectful than I ever imagined. And I thought I would have to use lube, but haven’t had to even once!”
The sexy and sweet Latina’s interests include world travel, red wines, fine cuisine, and attending music festivals, and her motto is: “A dirty mind is a terrible thing to waste.”
“I’m not a 9 to 5 girl,” Bell concluded. “I’m all about pursuing the freedom to be the person you want to be, and to have those incredible experiences.”
Bell was nominated for Hottest Newcomer in the 2022 AVN Awards, and was profiled in the September 2022 issue of NightMoves Magazine.
She is currently nominated for Best Sex Scene — All-Girl and Best Sex Scene — Vignette in the 2023 XBIZ Awards,
She resides in Las Vegas.
Contact:
Michael Whiteacre
HoneyHouse PR
PR@HoneyHouseXXX.com
775-742-8425
Twitter: @HoneyHousePR
#   #   #
2023 XBIZ Awards Caitlin Bell nominations OnlyFans XBIZ XBIZ Awards
Share. Facebook Twitter Pinterest LinkedIn Tumblr Email
Previous ArticleBack in the Saddle: Sophia Locke Rides a Career High After Five-Year Break
Next Article Adult Time Announces Special Black Friday Campaign