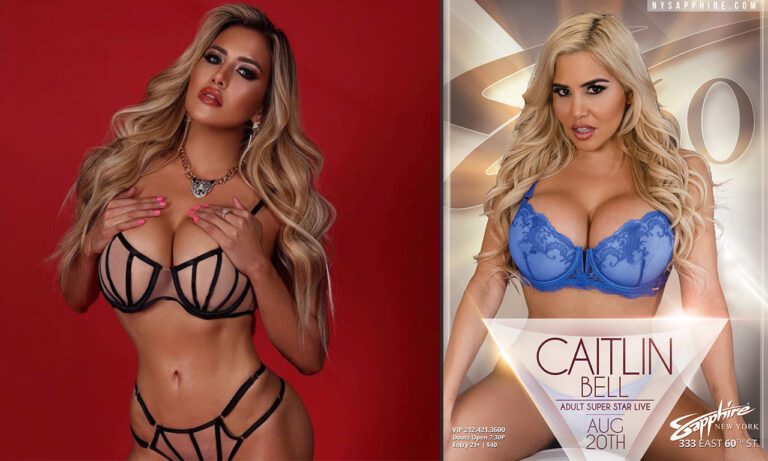 Share
Facebook Twitter LinkedIn Pinterest Email
(NEW YORK, NY. / Aug 19, 2022) — Caitlin Bell headlines New York City’s Sapphire 60 Saturday, August 20, with the one night stand at the Big Apple’s famed night spot marking Bell’s highly-anticipated feature dance debut.
As the pulse of the night beats with all of its might, the gorgeous adult film star and model is set to thrill the crowd at the luxurious venue.
“I am super excited to announce my first ever feature dance this Saturday, August 20th at Sapphire 60,” said Bell.
“I have to be honest, I am a little nervous — but that’s what makes it so enticing,” the famed adrenaline junkie added. “I am looking forward to meeting all my fans. I appreciate the support! You can finally see me off the screen and live!  See you all tomorrow night!”
Bell will hold a meet and greet after her Saturday night dance performance. Fans will be able to get an autograph or picture, as well as purchase some of her keepsake collectible merchandise.
Sapphire 60 is located on Manhattan’s Upper East Side, at 333 E. 60th St., New York, NY 10022.
Doors open at 7 p.m.  21+ proper ID & attire required.
For more information about Caitlin Bell’s Aug 20 appearance at Sapphire 60, or the club’s VIP amenities, including dinner and a private limo bus ride with the adult star, visit the club’s website ( https://www.nysapphire.com/NY-Sapphire-Adult-Star-Caitlin-Bell-Live.html ) or call (212) 421-3600. 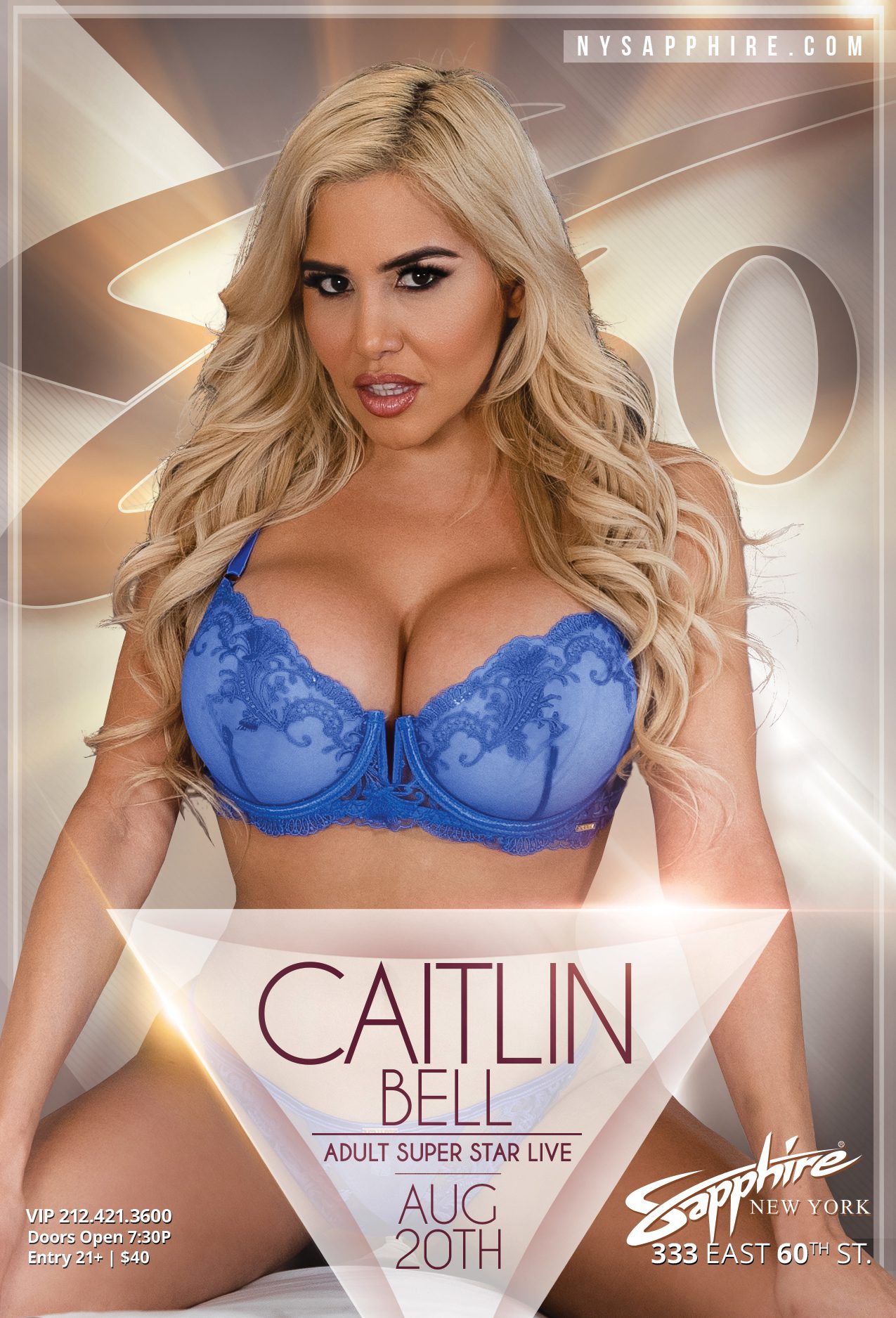 Learn about the club’s Adult Star Packages by visiting here, and book a deluxe VIP package here.
Sapphire NYC can be found on Twitter at @nysapphire60 and Instagram at @nysapphire60.
Caitlin Bell may be booked through The Lee Network for feature dance appearances.
Keep up with the captivating Caitlin Bell on Instagram: @OfficialcaitlinBell, at her her official website CaitlinBellVip.com, and her new Twitter account: @LatinaBellxoxo.
Join Bell’s premium OnlyFans.
Follow The Lee Network on Twitter @LeeNetworkNV.
About Caitlin Bell:
Of Spanish, Mexican and Native American descent, Caitlin Bell hails from Las Cruces, New Mexico, just across the border from Juarez, Mexico. She studied Human Nutrition and Food Science at New Mexico State University until a visit to Atlanta, Georgia led to an offer to work as a promo model and brand representative for a tequila company.
Bell spent a year traveling to every Spring Break party spot in the U.S., and then settled in Atlanta. After a five-year engagement requiring a stay-at-home suburban lifestyle, the untamable Bell decided to break free — literally — by sneaking out in the middle of the night.
After a two-month flirtation with exotic dancing, Bell decided to celebrate her newly-recovered freedom by traveling the world, with visits to Argentina, Costa Rica, Mexico, Great Britain, France, The Netherlands, and Thailand.
A brown-eyed blonde with a staggering 36D-26-36 figure, in June 2021 her sizzling social media photos caught the eye of a talent recruiter. While visiting Florida, Bell signed on with an adult talent agency, and made her adult movie debut for HotMILFSFuck opposite beloved performer Jake Adams, who was tragically killed in a freeway collision shortly after their scene was released.
A self-described adrenaline junkie, Bell learned that she is a natural in front of the porno lens, and in a very short time, the bombshell has shot for top-tier studios such as Brazzers, Reality Kings, Jules Jordan Video, Nympho, WankzVR, PornPros, SexLikeReal, MYLF, BrattyMilf and Team Skeet.
“I’m having the most fun,” Bell said. “The people in adult are more respectful than I ever imagined. And I thought I would have to use lube, but haven’t had to even once!”
The sexy and sweet Latina’s interests include world travel, red wines, fine cuisine, and attending music festivals, and her motto is: “A dirty mind is a terrible thing to waste.”
“I’m not a 9 to 5 girl,” Bell concluded. “I’m all about pursuing the freedom to be the person you want to be, and to have those incredible experiences.”
Bell was nominated for Hottest Newcomer in the 2022 AVN Awards.
About The Lee Network
Since 1989, The Lee Network has been the leading provider of adult star feature entertainers to clubs across the U.S., having played a leading role in shaping the feature entertainment business of the gentlemen’s club Industry around the globe. From legends of the past to modern stars of today such as Jessica Drake, Tori Black and Brooklyn Chase, to top magazine models, showgirls, mainstream celebrities, and reality TV reality stars, no other agency can boast such a star-studded lineup.
The company’s resources are unmatched, and its clients rank among the very best, most well-established and respected club owners and managers in the business — many of whom have worked with The Lee Network for over 15 years!
For a complete list of talent represented by The Lee Network, visit its official site: www.TheLeeNetwork.com.
Follow The Lee Network on Twitter @LeeNetworkNV.
Contact:
Michael Whiteacre
HoneyHouse PR
[email protected]
775-742-8425
Twitter: @HoneyHousePR
#   #   #
Big Apple Caitlin Bell New York City's Sapphire Sapphire 60
Share. Facebook Twitter Pinterest LinkedIn Tumblr Email
Previous ArticleEbony Mystique Guests on No Jumper Podcast, Talks 15 Inches and a Prayer Before Each Scene
Next Article Say Uncle Network Introduces Nick Floyd as its Newest Exclusive Model