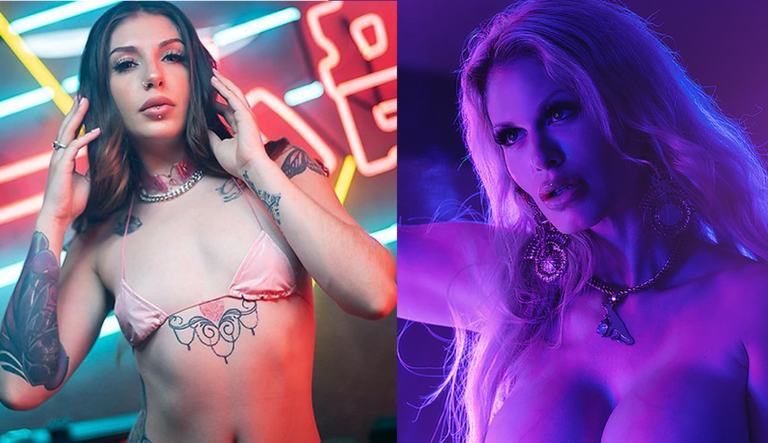 Share
Facebook Twitter LinkedIn Pinterest Email
(PHILADELPHIA, Penn. / September 14, 2022) — Up-and-coming performer and feature dancer Brenna McKenna is interviewed by adult star and glamour model Casca Akashova on the new episode of the AFTER HOURS Podcast.
In conversation with Akashova, McKenna discusses her love of talking dirty, how she has evolved as a woman, why she finally feels comfortable in her own skin, being dominant with women, her love of fans, and what plans she has in store for Casca!
“Being with Casca on her show was so fun!” McKenna enthused. “It felt like I was conversing with a girlfriend that I knew, and I could just be myself. And she could relate to me which allowed me to be open and comfortable. The time flew by fast and I’m excited for the next one.”
Enjoy Brenna McKenna’s entertaining and incisive interview with Casca Akashova for AFTER HOURS on Soundcloud ( https://soundcloud.com/afterhoursdqrmradio/brenna-mckenna-interview ).
For more information, follow After Hours Radio on Twitter: @AfterHoursDQRM
Follow Casca Akashova and Brenna McKenna on Twitter: @CAkashova / @BrennvMcKennv and Instagram:
@casca_overit_akashova / @BrennvMcKennv.
About Casca Akashova
An enthusiastic sexual performer whose look and attitude evoke the heyday of ’90s porn glamour, Casca Akashova exploded into the World of X in 2019, with a clear-eyed focus, impeccable styling, and one of the greatest front-end alignments in living memory.
Born to Russian and Swedish parents and raised in the U.S., Akashova attended private schools and considered a career as a petroleum engineer before dipping an expertly-pedicured toe into the world of adult modeling. Fortes fortuna iuvat (Latin for ‘fortune favors the brave’) reads the tattoo on Akashova’s left hip, and the savvy seductress lives up to the inscription.
Possessing an exceptional ease in front of the camera, and a natural way with dialogue, the elegant performer has earned an avid fan following via her scene work for studios such as Deeper, Brazzers, Penthouse, HardX, Jules Jordan Video, Naughty America, Hustler Video, TeamSkeet, Reality Kings and Mofos.
Akashova says that what she enjoys most about being an adult performer is “being able to bring fantasy to life. I love being able to throw myself into character and have fun.”
The green-eyed blonde with a staggering 32G-24-34 figure was nominated for “Most Spectacular Boobs (Fan Award)” nomination at the 2020 AVN Awards, “Hottest MILF (Fan Award)” at the 2021 AVN Awards, and in December 2020, she was crowned Best New Starlet in the year’s Fleshbot Awards.
Akashova treats admirers to an unparalleled level of access via her OnlyFans account, which is updated daily with images and videos that you can’t see on her public accounts.
Akashova’s interests include music, American muscle cars, fine lingerie, excellent cuisine and bourbon cocktails, and her career goal is to branch into writing and directing stylized, glamorous high-end adult content.
She resides in South Florida.
About Brenna McKenna:
One of the most classically beautiful women to ever grace adult films, Brenna McKenna is also a supernova of sexual energy and positive attitude.
Born and raised on the southern end of the great state of New Jersey, Sunday churchgoer McKenna attended a private high school on a softball scholarship before putting herself through college in Philadelphia as a stripper. After earning her business degree in Fashion Industry Management, she realized that she loved exotic dancing so much, she decided to make it her career.
For the 21 year-old, stripping had opened a path on her life’s journey of exploring her hitherto unexcavated sexual powers. But when the COVID pandemic panic came, and gentlemen’s clubs were shuttered, McKenna pivoted to OnlyFans. She eventually reached out to an adult talent agency, and filmed her debut porn scenes in March 2021.
Since then, the magnetic performer has divided her work time between the Los Angeles, Las Vegas and Miami filming hubs, producing her own content and starring in productions by Bang Bros, LeWood, Bang.com, Mike Adriano, She Seduced Me, Team Skeet, Perv City, Swallowbay, and many more.
With years of stripping experience under her belt, McKenna has also moved into feature dancing by signing with industry leader The Lee Network and debuting at New York City’s famed Sapphire 60 gentlemen’s club in June 2022.
She resides in Philadelphia.
Contact:
Michael Whiteacre
HoneyHouse PR
[email protected]
775-742-8425
Twitter: @HoneyHousePR
#   #   #
AFTER HOURS Podcast Brenna McKenna Casca Akashova
Share. Facebook Twitter Pinterest LinkedIn Tumblr Email
Previous ArticleFlight Club darts establishment takes aim at Las Vegas
Next Article GoAskAlex Suits Up for ‘September Wardrobe Challenge’ in Sex Work CEO Blog