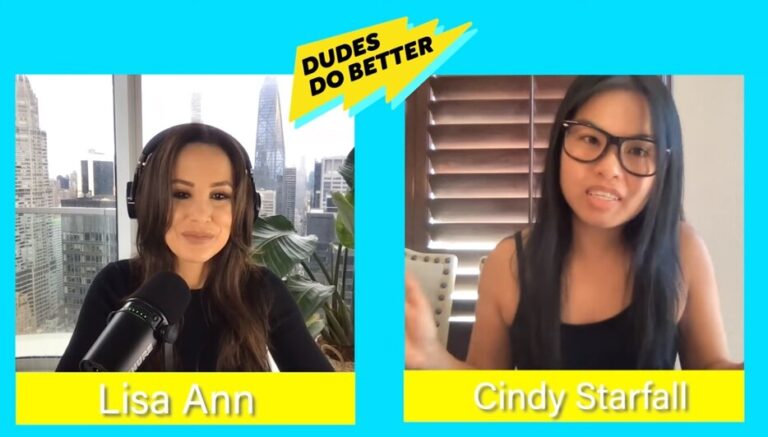 Share
Facebook Twitter LinkedIn Pinterest Email
(Los Angeles, CA / December 14, 2022) — Cindy Starfall recently paid a virtual visit to her longtime friend and colleague Lisa Ann to sit for a revealing one-on-one interview on the popular Dudes Do Better podcast.
“Catching Up with Cindy Starfall” does just that, checking in on the veteran adult film star, content creator and entrepreneur, who opened up about her jam-packed busy life, being single, making the most of the COVID pandemic lockdowns and creating new business opportunities for herself.

“COVID was bad… but it gave me a break; before COVID I was shooting and I was doing feature dancing every week and I didn’t have any time to take for myself,” she tells Lisa Ann. “I learned a lot of skills, I have my men’s clothing line, I learned designing and I learned real estate, I learned the stock market… I was like a sponge during COVID! I realized I am capable of doing other things.”

Starfall, who grew up in Vietnam and no longer has a relationship with her family because of her career choices, admits that people’s preconceived notions of ‘adult entertainers’ is a persistent barrier in forging true bonds and connections with her.

The Dudes Do Better interview is up at Lisa Ann’s YouTube channel and TheRealLisaAnn.com.

To learn more about Cindy Starfall, find and follow her at:

CindyStarfall.net
Twitter @cindystarfall
OnlyStarfall.com
Instagram @cstarfall
Fansly.com/QueenStarfall
YouTube: Youtube.com/CindyStarfalll
Allmylinks.com/cindystarfall
Sextpanther: textcindystarfall.com
ABOUT CINDY STARFALL:
The Good Girl-gone-Bad Girl story is as old as time, but adult film megastar Cindy Starfall’s jaw-dropping tale just might be one for the history books. The Vietnam native of Thai, Chinese and Vietnamese descent grew up isolated under strict parental rule, home school sessions and no social life. “It felt like living in a prison,” she recalls. Starfall got her first taste of freedom at 15 as a U.S. exchange student, but it was going away to University at 18 that changed her life forever: “I discovered SEX!”

Starfall entered the adult industry in 2012 and instinctively knew she had found her calling. “I’m a sexual person, and in Vietnam you are looked down if you express your sexuality in any way. Here in the U.S. I can express myself, embrace my body and power as a woman and be financially independent as well.” The star has since been nominated and awarded for her many achievements over the years from titans such as AVN, XBIZ, XRCO, NightMoves and Urban X, which inducted her into its Hall of Fame in 2020.

In addition to her onscreen talents, Starfall is also an entrepreneur who has launched a men’s T-shirt line, marketing agency and boasts an expanding real estate portfolio to ensure her future success outside of the industry. These days, her goals are a bit more personal: “I want to inspire and empower those with similar stories to find their bliss like I’ve found mine. I am so happy and grateful to have supportive fans, recognition from my professional peers and financial freedom doing something I truly love. After all, what is the point of this life if you aren’t enjoying it to the absolute fullest?”