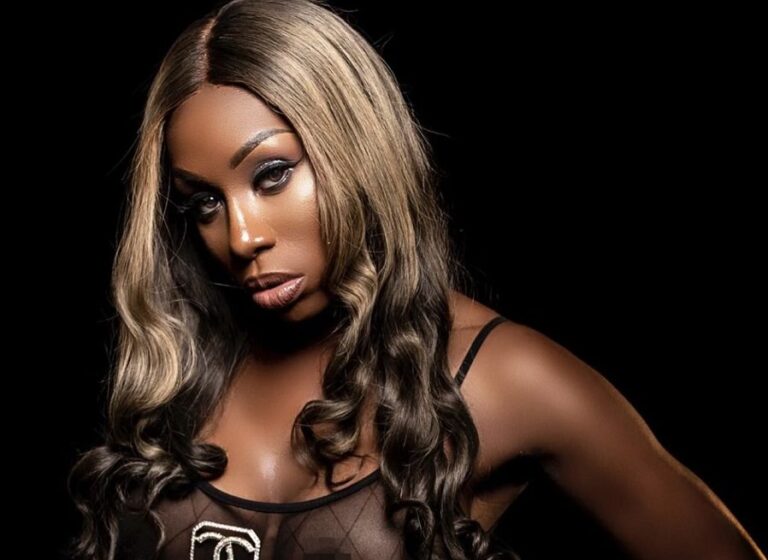 (Los Angeles, CA / November 17, 2022) — Ebony Mystique is giving fans a double shot of sex appeal this month as the heart-stopping cover model for both the November issue of AVN and Fall 2022 issue of Kink Queens magazines.

The industry up & comer is coming in HOT on the AVN cover, as she lounges poolside in the sunshine wearing a royal blue lingerie set with thigh high stockings, exquisitely adorned in shimmering gold finery – part of an eye-popping 26-page photo spread and interview.

Mystique is sparking excitement on the cover of Kink Queens as well, with a black fishnet bodysuit, a bejeweled silver G-string and perfectly placed Chanel logo just below her décolletage, with an eye-popping multi-page photo spread and interview, where she discusses her thriving adult career and launch of her new creative studio space in downtown Los Angeles.

The New Haven, Connecticut native, who currently lives in Las Vegas, told AVN that “all my goals that I had set forth for my entire career I feel like have happened in this year… it makes me more appreciative of the time I’m spending in my life – because it’s valuable,” she says of her blockbuster 2022. 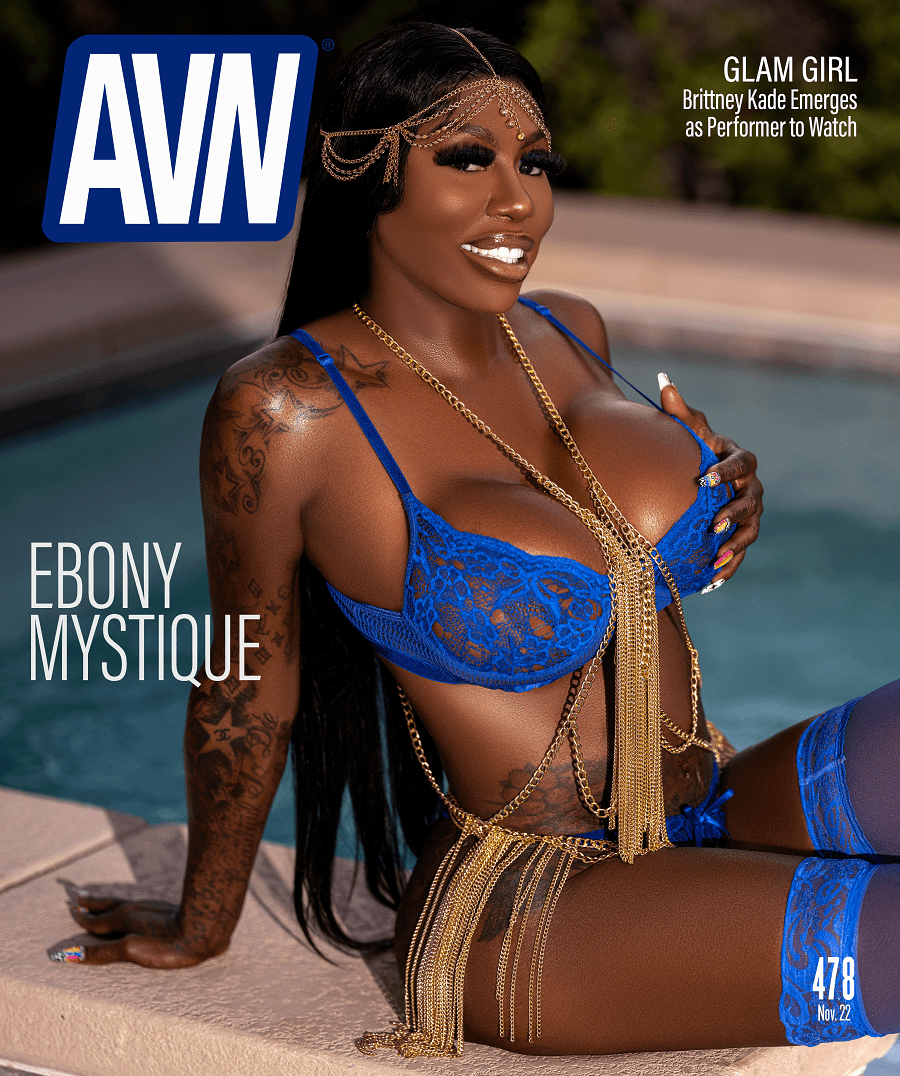 “I’m just happy to be here; it’s definitely where I’m supposed to be right now,” says Mystique of her success after only three years in the adult film business. “I don’t play about me; I’m a self-proclaimed Sex Toy Barbie but I am always my authentic self. My fans and supporters, they get it. When you have their attention, you better do something iconic with it… be your best and do it RIGHT!” 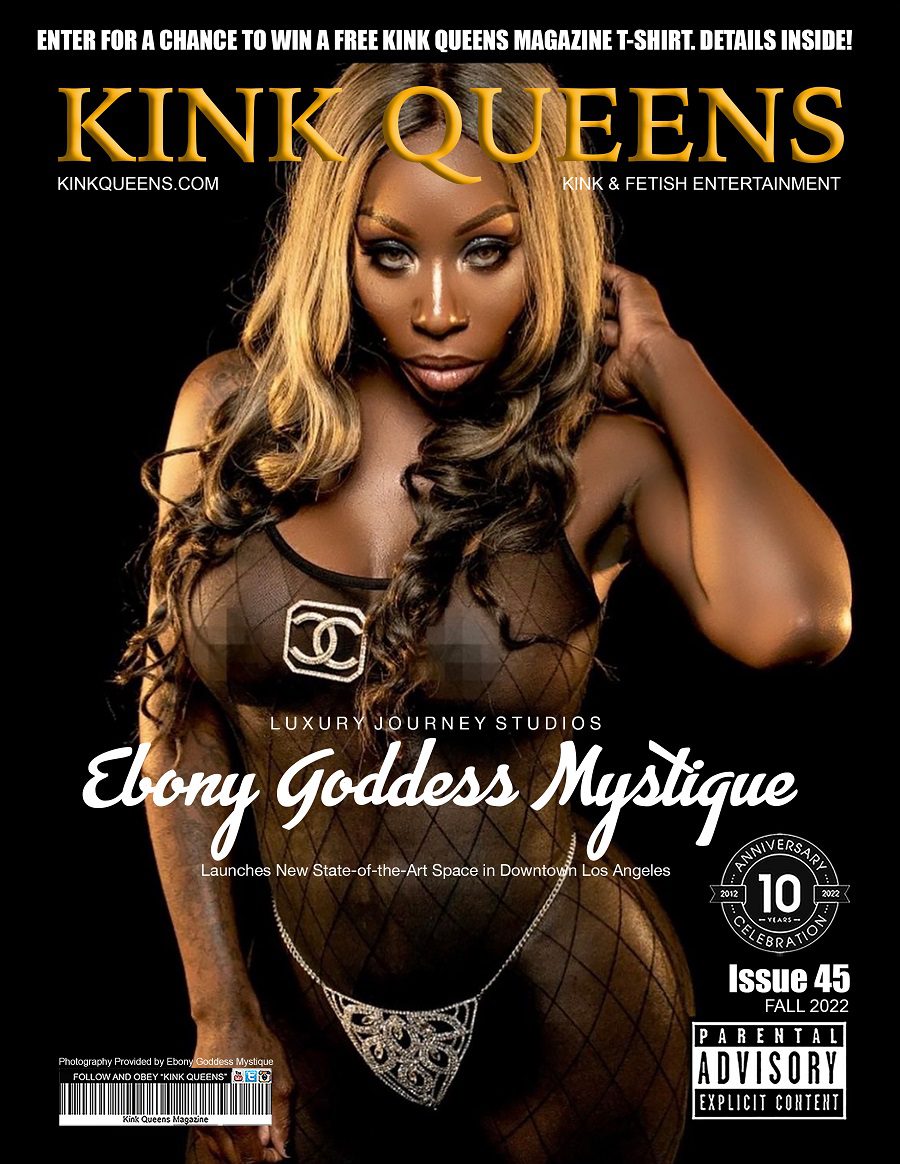 Find AVN Magazine at AVN.com and Kink Queens Magazine at KinkQueens.com.
Find and follow Ebony Mystique’s links and socials through Linktr.ee/ebonymystique.
ABOUT EBONY MYSTIQUE:
Adult performer, model and celebrity fashion designer Ebony Mystique knows what fans want, and she absolutely knows how to give it to them. The New Haven, Connecticut native, who has become a viral sensation for walking topless on the Venice Beach boardwalk and opening up to industry performers as the host of ‘Adult Talk X’ podcast, is all about being true to her authentic self.
A former registered critical care nurse, Mystique swapped careers – and coasts – to craft, construct and style one-of-a-kind creations in LA for high-profile clientele such as Cardi B, Destiny’s Child’s Michelle Williams, Lil’ Kim, Remy Ma, Summer Walker, London on da Track, Xscape, Karen Civil and City Girls, as well as the stars of Love & Hip Hop Hollywood and the BET Network under her clothing & lifestyle brand, MimiHDesigns.com. She and her fresh, vibrant designs have been featured in Essence, Sheen, Fashion Bomb Daily and Hollywood Unlocked, among others.
In addition to her sartorial talents, Mystique has long-held a charismatic charm (and a jaw-dropping body) that was ideal for making a splash on OnlyFans, so in 2016 she expanded her résumé to include content creator, and in 2019 she became a bona fide adult film star.
Mystique has so far starred in scenes for Adult Time, TeamSkeet, MYLF, Digital Playground, Bangbros, CherryPimps, Reality Kings, PinkyXXX.com and more, as well as Brazzers, where she is an exclusive contract star, and Jules Jordan, where her film Rack Focus 2 won a 2022 AVN Award for ‘Best Curve Appeal Movie or Limited Series’. She is also a 2022 Urban X Awards winner for ‘Hottest Inked Star’ and 2021 Fleshbot Awards nominee for ‘Best Ass’.
She is also the owner of a new studio space in downtown LA that caters to entertainment professionals for both mainstream and adult photo and video/film shoots, and admires the legendary Coco Chanel, whose philosophy was, “In order to be irreplaceable, one must always be different”. To her many, many fans and followers, Ebony Mystique is, without a doubt, absolutely irreplaceable.
# # #
Press and media contact:
Brian S. Gross | BSG PR | 818.340.4422 | brian@bsgpr.com | @bsgpr
AVN Ebony Mystique Kink Queens Magazines
Share. Facebook Twitter Pinterest LinkedIn Tumblr Email
Previous ArticleAfter Jaaden Kyrelle’s OnlyFans Success at 20, It’s Vegas Baby, Marijuana Grow Op for 21!
Next Article Spencer Bradley to Host Award Nominations Party Live on OnlyFans Friday