Festival is ready to breathe ‘Life’ into downtown Vegas in September 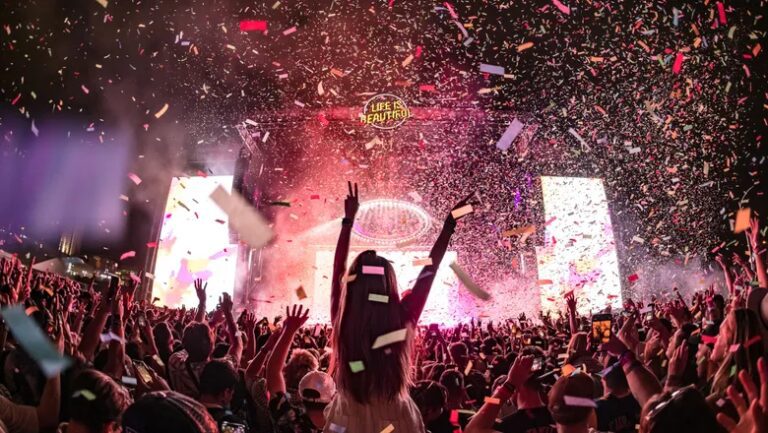 The annual Life Is Beautiful festival, which takes place in downtown Las Vegas Sept. 16 to 18, gratifies almost all of the senses. Guests hear the sound of music and comedy from multiple stages, see new murals and other artwork created each year and smell and taste the robust food and beverage offerings.

But more than that, guests — connecting with each other and the artists — also feel an unmistakable vibrancy of 18 city blocks brimming with optimism and innovation.

Finding the right mix of artists is the top priority for Craig Asher Nyman, head of music and live performances for Life Is Beautiful since its inception in 2013.

“Our lineup is very balanced across multiple genres,” Nyman said. “We really strive to have a little bit of everything, a little-something-for-everyone-type mentality behind it.”

In addition to headliners such as Calvin Harris, Arctic Monkeys, Lorde, Cage the Elephant and Jack Harlow, the Gorillaz will be among this year’s most popular acts. “It’s their first time back since 2017. They haven’t toured in America in years now,” Nyman said.

“We have some really great smaller, up-and-coming acts like Tai Verdes [with “A-O-K” and “Stuck in the Middle” hits on TikTok], who before the pandemic was working in a Verizon store and is now he’s selling out shows and playing in front of massive crowds,” Nyman said. Brazilian DJ Mochakk, one of the fastest-rising DJs in the world, will also perform.

A special festival-weekend edition of Las Vegas’ popular Market in the Alley, at Life Is Beautful since 2017, will return on Fremont Street between 10th and 11th Streets.  The open-air space will have more than 40 vendors with handmade clothing, candles, art, jewelry and more.

Other figures from the art and culinary worlds who will be attending will be announced soon.

“When we first started … we were really the first music festival to have a full culinary and cocktail program, and the cocktails are still a big part of it. But now we’re starting to see a lot of the live cooking as being a huge draw for us,” Nyman said.

Life Is Beautiful has had a hand in transforming downtown Las Vegas. Murals painted for the event have remained on many buildings in the festival’s footprint, and an entrepreneurial vibe has taken shape.

“With other businesses, operations, artists and organizations who also want to see downtown rise and become a really stronghold of the city, we rise together,” Nyman said. “We’ve just been a piece of that … to continue to push for the attraction of downtown, to wanting to be down there, whether it’s to live, to work or to play.”

The opening of the Circa Resort & Casino, Downtown Grand’s new room tower and other new accommodations have provided Life Is Beautiful’s out-of-town’s guests more convenience when they’re not reveling at the festival. This year is trending to be about 72% tourists, with Southern California being the biggest feeder market, Nyman said.

“Ease and accessibility [are] big reasons,” he said. “This festival is easy to get in and get out of. You’re not having to think about your transportation once you get here or calling an Uber at the end of the night. It’s as easy as walking out the gate, going on Fremont Street Experience and getting back to your hotel.”

Rolling Stone, a longtime Life Is Beautiful partner and sponsor, acquired a majority stake in the festival this year. While most guests won’t notice additional branding or changes, Nyman said the media company helps amplify the festival and deepen its connection with fans and music.

Rolling Stone’s involvement will enable Life Is Beautiful to “create more events, more art opportunities, more impact, not only here in Vegas but around the country and around the world,” Nyman said.  “It allows the Life Is Beautiful brand to become more of an international name moving forward as we work with a publication that’s spent its career pushing — first in America and then internationally — music, culture, fashion and everything in between.”

Single-day admission begins at $180 (plus tax and fees) with three-day passes starting at $380. VIP, VIP+ and All-In bracelets include express-lane entry; access to lounges, concierge services and exclusive food and drink vendors; and other amenities. As many as 50,000 people are expected to attend each day.