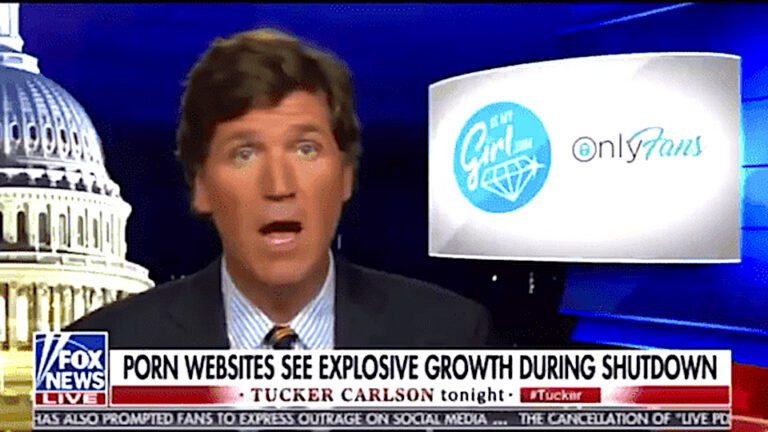 The popular personality made the comments during a recent interview with University of Chicago freshman student journalist Daniel Schmidt, who hosts a podcast called “Piece of Schmidt” and shared the interview via Twitter.

“It has certainly been a big change,” replied Carlson, whose on-air opinions have previously been characterized by his own network’s lawyers and a New York district judge as “exaggeration,” “non-literal commentary” and not “stating actual facts” in a 2020 lawsuit.

“I’ll be honest, that is one subject we have done a couple subjects on it, but I am just too squeamish to dig into it,” he said. “My suspicion is exactly what you said. Any time you have a societal change you are going to have downstream effects and if it is big change there are going to be big effects.”

Carlson repeated the myth, regularly shared in the mainstream media, that adult companies are somehow run more mysteriously than other businesses, and took the opportunity to call for action to be taken against them.

Casual Sex ‘Too Easy’ for Carlson

Carlson then shared his notions about younger people and casual sex.

“This whole idea that banging 40 people in your 20s is a net positive or something, it is actually not even that fun,” Carlson told the 18-year-old interviewer. “I think, for men anyway, it is all in the chase, men are programmed to want to pursue women, of course. But that is the pleasure, having sex with strangers is never that fun, let’s just stop lying about it.”

“You are too drunk anyway,” Carlson added, seemingly implying that sexual behavior among people under 30 is always linked to alcohol.

Carlson also shared his belief that casual sex is “super easy, so that is not an achievement at all, because feminism has convinced women that they have to be like men so that they have to sleep with you or whatever.”

Carlson described this status quo as “so unbelievably fucked up it’s hard to believe it is actually real. But it is. Anyway, it is all fake, it is all pure propaganda, that is why everyone is so unhappy. Add meaning to your life and you will be happy.”

The TV personality also suggested that young men should “get married, have more children than is affordable … take a job they are unqualified for, and go ‘balls out’ and have adventures,” Newsweek reported.