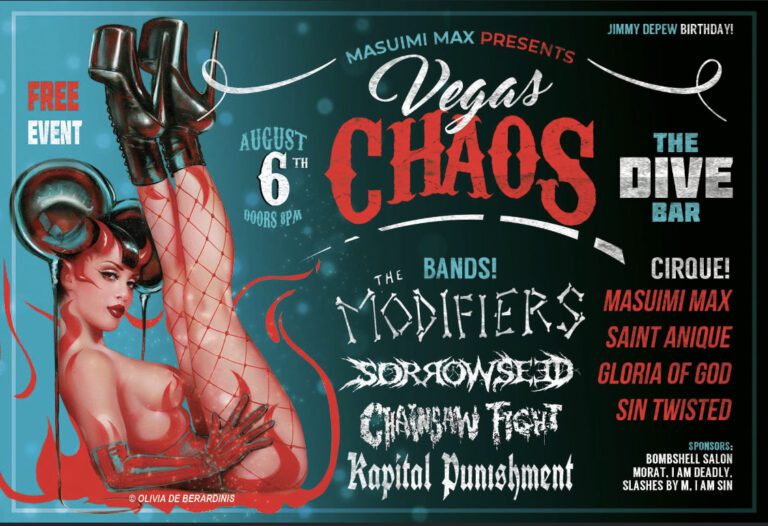 If you’re in the City of Sin this weekend, Masumi Max’s Vegas Chaos event at the Dive Bar in Vegas needs to be at the top of your Saturday night must-do list. Goddess Lilith and the band she fronts and founded, Sorrowseed, will be bringing the chaos with a live performance of their brutal melodic death metal music. They will also have a table at the event where fans can purchase their full-length albums, “Nemesis Engine” and “The Extinction Prophecies”, t-shirts, stickers, and lighters. Between the loud, in-your-face bands taking the stage, hot burlesque performers including Masumi will be taking the stage to keep the crowd thirsty for more.

‘We’re excited to be appearing at Vegas Chaos on Saturday night. It’s our second time playing the epic, chaotic event. But this time, we’re headlining the event, which we’re ecstatic and honored about. I’m a huge fan of Masumi’s, so working with her is like a dream come true,” says Goddess Lilith.

Vegas Chaos is happening at the Dive Bar in Las Vegas on Saturday night, with the doors opening at 8pm. The 21+ event is free to attend, and early arrival is suggested since it will be a standing-room-only event. The Dive Bar is located at 4110 S. Maryland Pkwy in Las Vegas. More info about the show can be found at reverbnation.com/sorrowseed.

Get amped up for the show and more Sorrowseed in your life. Formed in 2009, the brutal melodic death metal band from New England has toured extensively in the US, Canada, and UK. Check out their music on Spotify open.spotify.com/artist/5KMp4xL5BOLd3UIyZlVk7M, and follow them on Facebook facebook.com/Sorrowseed and Twitter at @Sorrowseed to keep up with their appearances and new music releases.