Gorgeous Starlet Penelope Kay Is the NubilesPorn.com June Flavor of the Month 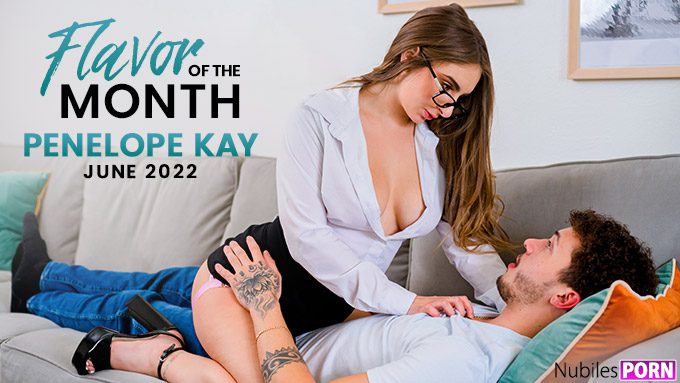 Share
Facebook Twitter LinkedIn Pinterest Email
(Los Angeles, CA) NubilesPorn.com has named their Flavor of the Month for June and its gorgeous starlet Penelope Kay.
Known for being the girl next door and a petite, flexible spinner, the short but stacked Penelope Kay has been crowned the June Flavor of the Month for NubilesPorn.com. “June 2022 Flavor of the Month Penelope Kay– S2:E11” has the coed trying to become a therapist and using her stepbrother, Apollo Banks, as a case study. Penelope asks him about his sex life, and Apollo confides having a girl is important to him, and he’d like to have more stamina in bed. She has him lay down, describes a sexy scenario to him, and before she knows it, she’s straddling him and about to kiss him. Then, she snaps back to reality and realizes this can’t happen. After a day of Penelope giving him the silent treatment, Apollo joins his stepsister on the couch to talk to her. She steps back into her role of sex coach, unzips his pants, and gives him the BJ he’s been craving. Then she strips off her clothes, expects the same treatment from him, and masturbates on the couch. Penelope is intent on helping her stepbrother out and holds nothing back as she slides on to ride him cowgirl with her big naturals in his face. After going at it in reverse cowgirl and doggy style, Penelope lays on her back, and he fills her up with a creampie.
“This scene was a lot of fun to film. I’ve thought about being a sex coach, and my scene with Apollo made that a reality…well, sort of. I think I can help him get his stamina up with a few more sessions. But then again, I’m always planning my next naughty adventure. I’m honored to be the Flavor of the Month and hope the members enjoy my special scene,” says Penelope Kay.
Our members can’t get enough of her unmatched sex appeal, so it was a no-brainer to crown her the Flavor of the Month for June. And this scene might be one of her best,” says Belinda, Nubiles Affiliate Manager.
Watch the trailer and member-exclusive scene for “June 2022 Flavor of the Month Penelope Kay– S2:E11” at myfamilypies.com/model/profile/13743/penelope-kay. And while you’re there, check out her bio and previous must-see scenes.
For Nubiles media requests, contact Erika Icon of The Rub PR at [email protected].
ABOUT NUBILES
Nubiles nubiles-porn.com and Nubile Films nubilefilms.com are two of the most respected studios in the industry. With countless awards nominations and multiple AVN Awards wins, their high-quality HD scenes with the top stars and rising stars have kept their members happy and their brand expanding. Follow them on IG at @nubilefilms. Subscribe to their official Pornhub accounts at pornhub.com/channels/nubiles and pornhub.com/channels/nubilefilms for updates, trailers, and more.
Apollo Banks exclusive Family Pies Flavor of the Month girl next door members Nubiles Nubiles Porn Penelope Kay scene sex coach spinner stamina stepbrother stepsister therapist trailer
Share. Facebook Twitter Pinterest LinkedIn Tumblr Email
Previous ArticleLS Creators
Next Article Dante Cole Scores ANOTHER Award for His Acting Chops & It’s from The Grabbys