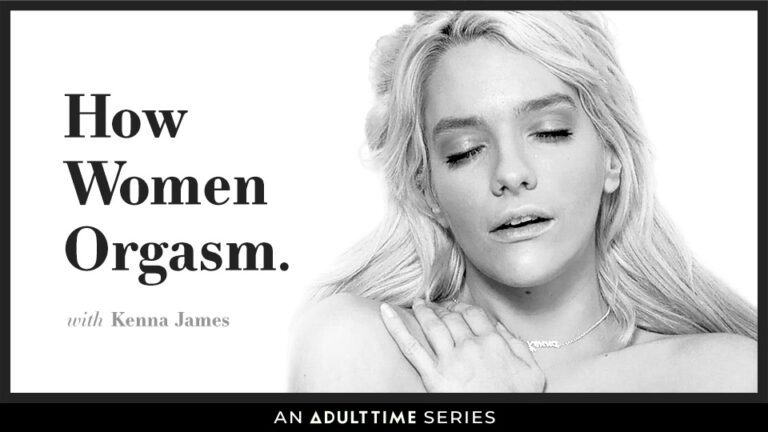 Share
Facebook Twitter LinkedIn Pinterest Email
(Montreal, QC / November 14, 2022) — Kenna James joins Bree Mills’ candid study on How Women Orgasm in the latest Adult Time Original Series that gets up close up & personal with the industry’s favorite stars.
The bubbly blonde star, who informs Mills that she remembers her first time masturbating when she was “much younger” and these days finds time for herself “three or four times a week”, gives fans a peek into her most private moments as she expresses herself fully – by herself, as herself – in an exclusive showcase that’s raw, rare and real.
James is a longtime Adult Time favorite that radiates exuberance, joy and enthusiasm in each and every one of her performances, and fans can find her in plenty of new scenes for the brand, including “The Costume Party” from Transfixed, “Gyno What You Did Last Summer” from Mommy’s Girl and “Mad Fuckers: Well Fuck You Too!” from Modern-Day Sins.
How Women Orgasm, which launched in 2020 with explosive episodes featuring stars such as Alexis Tae, Dee Williams, Jay Taylor, Whitney Wright, Jenna Foxx, Jane Wilde and Ember Fiéra, is already well-regarded as one of the highest quality female orgasm videos that fans can find online, emphasizing the industry’s most-wanted stars during their most intimate moments.
Find How Women Orgasm at Adulttime.com/channel/HowWomenOrgasm and the AdultTime.com streaming platform, home to more than 350 channels, 61,000 episodes and 8 new releases per day from some of the most recognized and respected studios in the industry.
ABOUT ADULT TIME:
Launched in 2018, Adult Time is a streaming service exclusively for adults. Created by award-winning filmmaker Bree Mills, who also serves as the brand’s Chief Creative Officer, Adult Time is a platform built by fans who believe in a future where mature audiences can safely, securely and proudly have a place in their lineup for premium adult content.
Dubbed the ‘Netflix of Porn’ by mainstream media outlets, Adult Time offers an extensive catalog of more than 350 channels, 61,000 episodes and 8 new releases per day from some of the most recognized studios, including Girlsway, Pure Taboo, Burning Angel, Fantasy Massage, 21 Sextury, and Vivid Entertainment, alongside exclusive original series, feature films, and much more.
For more information, please visit:
http://www.adulttime.com
Follow on Twitter & Instagram:
@adulttimecom
@thebreemills
Media Inquiries:
Brian Gross
BSG PR
818-340-4422
brian@bsgpr.com
# # #
21 Sextury adult time burning angel Fantasy Massage feature films girlsway Kenna James orgasm original series Pure Taboo Vivid Entertainment women Women Orgasm
Share. Facebook Twitter Pinterest LinkedIn Tumblr Email
Previous ArticleCountry Mum Honeyy Brooks Keeps Rural Farm Life Humming with OnlyFans CA$H
Next Article TeamSkeet Honored with 14 AVN Awards Nominations for 2023