I Don’t Want to Hide My Sexual Orientation Anymore. By Molly Frances

Moving from shame to vulnerability 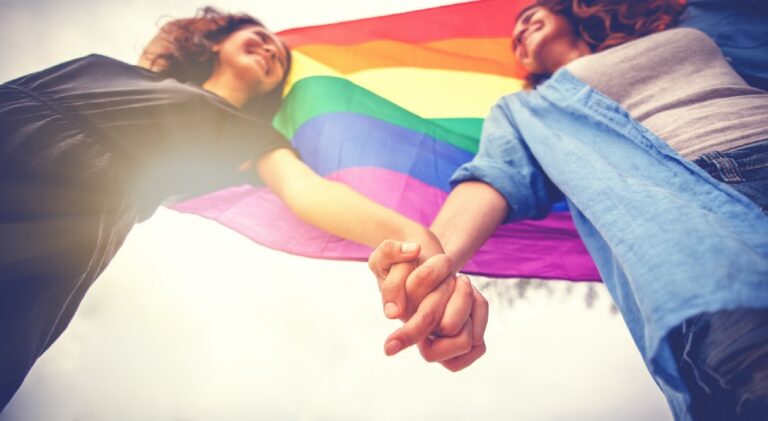 I’ve carried the shame I felt as a young person about my romantic and sexual urges for women around for too long. I was raised catholic, and good little midwestern girls dated and married corn-fed midwestern boys and had a pile of kids. That was the only acceptable narrative. I lived my life according to that narrative, for a while. Living a lie is exhausting, and I grew tired of it, but I wasn’t ready to be vulnerable.

Living in a heterosexual marriage, no one would think to question my sexual orientation. I also did an excellent job of hiding it. Hiding my sexual identity fueled my sexual shame.

My parents told me as a teenager that if their child were gay, they’d disown them. They don’t know I’m bisexual. They have no reason to. I’ve never dated a woman because I was so busy lying to myself that I didn’t have the mental or emotional space.

I’d develop friendships — sometimes close ones — then I’d develop a crush. I wouldn’t let my friend know. Instead, I’d slowly distance myself from them, hoping to squash the feelings. I’ve always said I have trouble building friendships with women, but that isn’t true. I’ve been afraid of building close, vulnerable relationships with women.

I was scared someone might find out that I wanted to do a lot more than hug them and feel threatened or stop loving me. I didn’t think that I was worthy of love if I lived as my authentic, bisexual self.

Now that I’ve written that down and reread it, I’m crying, so give me a minute before I finish this story….

It took me 37 years to finally admit out loud to another human that I am, and have always been bisexual. The first person I told was Hubby, which shouldn’t surprise you if you’re reading any of my other work. Our relationship is built primarily on vulnerability, trust, and compassion. Hubby’s response was the response teenage me needed from my parents.

“Okay, thank you for telling me. I can’t wait to see how happy it makes you to live as yourself.”

Okay, so I admitted to Hubby that I’m bisexual, I realized it to myself. Next step, be honest with people about my identity. Now, it isn’t often that people ask me about my sexual orientation. Our world operates with heterosexuality as the default setting, so people just make broad assumptions that any woman who is married to a man is straight. When a woman divorces and marries a woman, shockwaves careen around the globe. And a heterosexually married man who wants to pursue relationships with other men? Hell no.

However, I wanted to tell my friends. I wanted to give the people I’m closest to the opportunity to know me. Then, something shut me up again.

A woman I considered my best friend found out her husband was bisexual and wanted to pursue sexual exploration with other men. Her response was to shame him, kick him out of the house, and refuse to accept his vulnerability. She was angry that he’d dare to want something she couldn’t offer. She was not the right person to tell about my bisexuality.

So, I moved on to another woman I considered a very close friend. I told her my secret one night over a glass of wine at our favorite restaurant. The next week she invited me to her condo for drinks and appetizers with her boyfriend. I won’t go into the details of that story because it’s still a bit too painful.

Alright, two attempts at vulnerability and two disastrous results. So, instead of trying again, I kept it close to my chest.

Then I met Lisa. I knew from the moment I met her that I wanted to pursue a relationship with her. I could stare into her crystal blue eyes for hours, and the creamy softness of her skin calls my hands to touch it. So, I became friends with her, but I didn’t tell her I wanted more. I was repeating my old pattern of building a friendship without being vulnerable and authentic. I didn’t want this one to end the same way, with an emotional brick wall built between Lisa and me.

So, one night after dinner, I told her. I almost didn’t. Do you know that light-headed feeling when you’re nervous about saying something? I stood there with a roaring between my ears, and my palms sweating (come on, it’s not just me, right?). I shifted my weight from left to the right and back again. I talked about other things.

Then, I let the words tumble out. Once again, I found the reaction I needed as a teenage girl navigating my developing sexuality.

I was okay; I was enough; I was worthy of love.

Luckily, Lisa reciprocated my feelings, and we’ve started to develop this exciting new relationship. It’s comforting that we’ve both lived as heterosexual women our entire lives. I understand why she’s taking her time telling her other friends about us and why some friends she isn’t telling.

The other day Lisa texted that she’d told her best friend about me and that her friend was supportive and encouraging. Tears immediately sprang to my eyes. Lisa still found me lovable; she was proud to know me and wanted to share it with the people closest to her.

So now, I want to do the same for Lisa. I want to give her the gift of pride, acceptance, and knowledge that she is enough just as she is. I’m starting with my friend Katy. She’s the person that knows all of my shit and loves me anyway. I’ve already rehearsed how the conversation is going to go in my mind.

“So, Katy, I just want to tell you that I’m bisexual and have this new girlfriend, Lisa, and I’m so excited about it that I want to share it with you.”

“Duh, as if I didn’t know you were into vagina. Tell me all about it.”

I’m sure Katy has my number, and I know she’ll react to anything I tell her with love and understanding — trust me, I’ve dropped some bombs on her before. But I’m still nervous about telling her. That trusty shame monster surrounding my sexuality tells me that she won’t love me if I am honest.

The shame monster developed because parental love hinged on not revealing my sexual orientation. That monster feeds on my fear of being rejected, of not being loved. I’m just trying really hard to starve it to death.

I’m not going to give into the fear that my shame needs. I’ve made a promise to myself when anyone new comes into my life, I’ll be upfront about my true identity. As for people who are already in my life? I’ll tell them one at a time as the time feels right. I don’t think it needs a big announcement, but I plan on talking about my relationship with Lisa as long as she’s a part of my life. She deserves at least that.

I’m excited to see how it feels to stop hiding. I have this fantasy of walking in the next PRIDE parade with both Lisa and Hubby beside me, loving me, and supporting me. I’ve already bought my rainbow miniskirt.