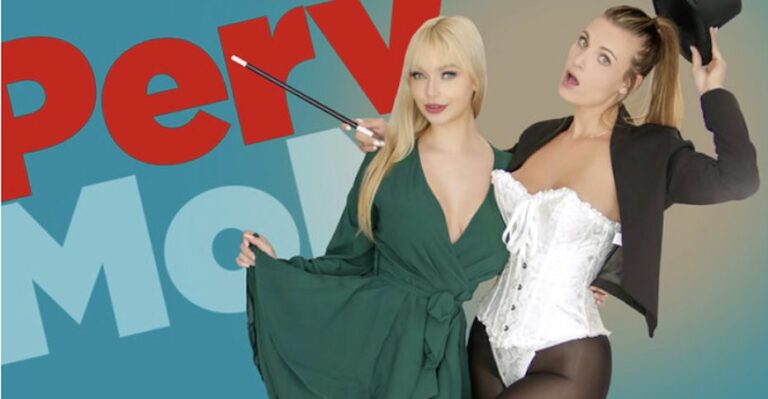 (Los Angeles, CA) Stunning, blonde, naturally busty Canadian Jessica Starling has made her way to yet another Team Skeet site, and this time she’s got a starring role in PervMom’s newest scene that features three hot scenarios.

“This scene was so much fun to film! It really was magical with the chemistry between all three of us. I like that there was a fun script with some humor and lots of fun sex. I know the Team Skeet members will enjoy the scene, and they might even yell abra cum-dabra while orgasming along with us,” says Jessica Starling.

Watch the extended trailer for “The Magician’s Assistant” at mypervmom.com/the-magicians-assistant. And see the full scene at pervmom.com/pin/?nats=OTkzLjcuODkuNjQzOS4wLjAuMC4wLjA. Take advantage of Team Skeet’s Holiday Sale to get instant access by clicking on the “Halloween Sale” button.

Interview Jessica Starling for your site, publication, or show by contacting Erika Icon of The Rub PR at erika@therubpr.com.

Jessica was featured in a 12-page spread for ManyVids’ Runaway Rebels issue and spotlighted in their documentary “We Are Many” about the rise of CEO Bella French. She’s also been featured in Hustler multiple times and was crowned a Hustler Honey in November 2022, and she’s also been interviewed by many mainstream outlets like Mashable and Huffington Post. When she’s not working filming for top studios or her platforms, you’ll find her playing video games, reading classic novels, and enjoying a glass of red wine. Jessica has received industry acclaim with nominations from the AVN Awards for Fave Indie Clip Star, XBIZ Awards for Cam Model of the Year, XBIZ Cam Awards for Rising Premium Social Media Star, and Fleshbot Awards for Cam Model of the Year and Best MILF.