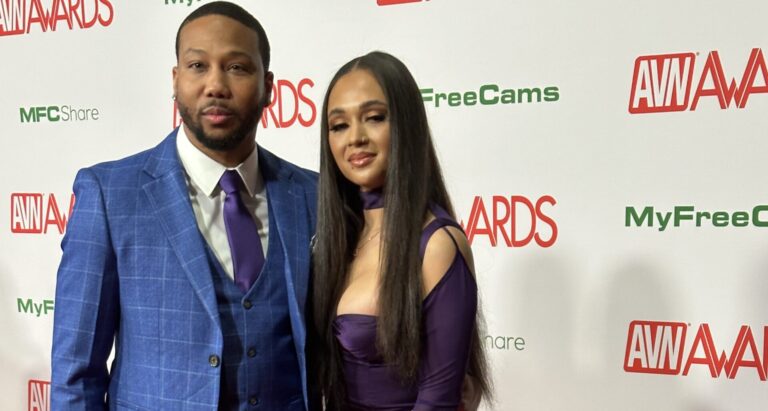 (Los Angeles, CA) Looking to be legendary in adult and resembling award-winning singer John Legendary can now add AVN Award winner to his growing list of accolades. He was part of an ensemble cast of the most iconic scenes released by Vixen Media Group to date.

2022 had been an incredible year for John Legendary, and he knew the odds were in his favor to win Best Foursome/Orgy Scene at the AVN Awards. It was his first time on the star-studded red carpet in Las Vegas, and he walked confidently with a smile. When the award winner was announced as Blacked Raw’s “High Gear,” he was elated to be an AVN Award winner. The high-budget scene from VMG features fast cars and hot women and was one of the standout scenes of 2022 and also starred Violet Myers, Vicki Chase, Vic Marie, Vanna Bardot, Nicole Doshi, Savannah Bond, Anton Harden, Richard Mann, Isiah Maxwell, Jonathan Jordan, Brickzilla, Garland, Jamie Knoxx, Jay Hefner, Tyrone Love, Stretch, and Zaddy. The scene is available on the Blacked Raw site blackedraw.com/videos/high-gear and the Blacked Raw V56 DVD.

“I knew it would be amazing when the scene was filmed, and I was honored to be cast in it. It’s incredible to be an AVN Awards winner and to have such a great team behind me. And thank you, AVN!” says John Legendary.

John Legendary is now a free agent. Studios, directors, and producers can reach out to him directly by emailing him at johnlegendaryxxx@gmail.com to get him on their set.

With just six months in, he’s becoming known as a male talent who’s a gentleman first who realizes the importance of a good stroke and making sure his female partners are enjoying themselves. John has already filmed scenes for Pure Taboo, Blacked Raw, Fantasy Massage, Sparks Entertainment, VRBangers, Love Her Films, Fantasy Massage, Dogfart, and more. With a little over a year in adult, he’s won an AVN Award for Best Foursome/Orgy Scene and Best Sex Scene — Vignette from the XBIZ Awards in addition to being nominated for Best New Male Talent from the Fleshbot Awards and Best Male Newcomer from the Urban X Awards.