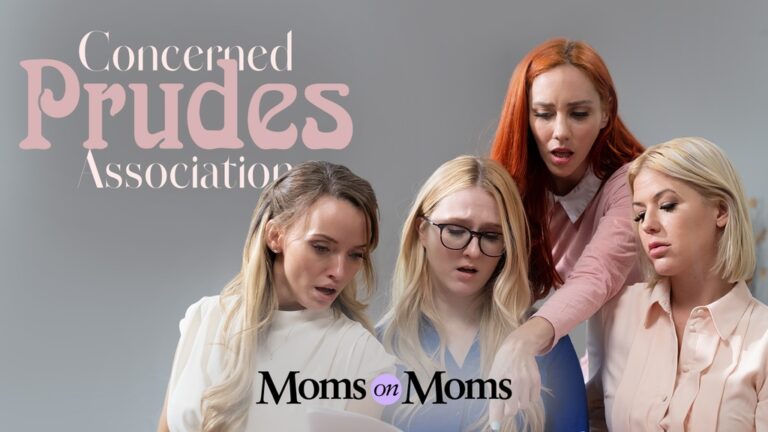 Sometimes on Girlsway, it’s all about moms who like moms. And that’s the case in Jupiter Jetson’s latest scene, “Concerned Prudes Association,” from the Moms on Moms series. She’s part of an all-star cast of MILFtastic moms with Pristine Edge, Audrey Madison, and Kit Mercer. The Concerned Parents Association is having an emergency meeting headed up by Jupiter. The emergency is that the next school play will be an adaptation of the highly sexual and totally inappropriate “Teenage Lesbian.” These ladies have taken charge and implemented changes to the dress code and other pressing matters. Now, they need to get a hold of the script, find the most objectionable filth, and let the principal know it’s not OK. They decide acting out the scenes with the most objectional parts will be an excellent place to start. Little do they know, but acting out the steamy parts will get these ladies hot…so hot that they go off script for an energetic foursome. Will this be the catalyst for them to give up their prudish ways? You’ll have to watch and see!

“It was such a pleasure to work with Kit Mercer. All the ladies were super professional and made the scene incredible. This one will definitely get some attention this upcoming awards season. It’s only been up a few days, and over 15k members have already watched it, and that’s very exciting,” says Jupiter Jetson.

Watch the trailer and member-exclusive for “Concerned Prudes Association” at girlsway.com/en/video/momsonmoms/Concerned-Prudes-Association/202727.