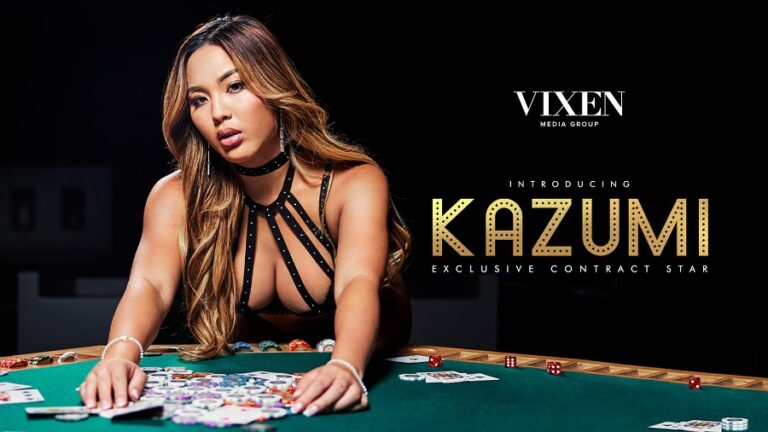 Share
Facebook Twitter LinkedIn Pinterest Email
The 25-year-old creator is in the top 0.01 percent of OnlyFans and is bringing her work to the adult big screen
LOS ANGELES (Nov. 11, 2022) —  Vixen Media Group announced today its exclusive partnership with Kazumi, a model, content creator, influencer and business owner, who was recently featured in Forbes. Her new scene “Big Win” co-starring industry legend Mick Blue releases November 11th on Vixen.com.
Kazumi’s unconventional marketing and witty content has captivated a large devoted fan base across Instagram, TikTok and Twitter. The talented marketer embraces out of the ordinary ways of self-promotion with clever publicity stunts such as her OnlyFans banner flying over the Coachella festival and fan-purchased billboards of herself across Los Angeles. The social media guru continues to make headlines with a feature in MAXIM Australia & Forbes, as she now sets out to conquer the world of mainstream adult entertainment.
“It’s a dream come true to work with Vixen exclusively,” said Kazumi. “This is my first venture into the professional mainstream adult industry, and I was very picky with how I would be presented. I feel like I’m in the big leagues!”
Kazumi has a diverse background. She is Filipino-American and was born in Kuwait, then raised in Los Angeles. “I’m excited to break the internet and show the world what I’m really made of,” she went on to say. “I want to broaden my audience and really carve out my brand as a household name.”
“Kazumi’s personality is such a great fit for the Vixen family,” said VMG director Laurent Sky “We knew right away from her captivating social media presence to her intimate OnlyFans performances, that we had to partner with her. We are thrilled to share her first mainstream adult entertainment project with the world.” Be sure to follow Vixen on Twitter and Instagram for all the latest exclusive news. To watch Kazumi’s exclusive content and other new, exciting scenes, visit Vixen.com
About Vixen Media Group
Founded in 2014, Vixen Media Group is the premier online destination for exclusive and luxury adult content. Featured in Rolling Stone, Forbes, The Daily Beast, BuzzFeed, Men’s Health, Vice and other outlets, Vixen Media Group’s network of branded websites have more than 30 million visitors each month with more than nine million Instagram followers. Its innovative studios – Vixen, Blacked, Tushy, Deeper and Slayed – have earned more than 100 awards. To learn more, visit vixengroup.com.
###
BSG PR
Brian Gross
Brian@bsgpr.com
818.340.4422
@bsgpr
contract star Kazumi Vixen Media
Share. Facebook Twitter Pinterest LinkedIn Tumblr Email
Previous ArticleTheodora Day Crowned Team Skeet Allstar
Next Article SayUncle Network Spotlights Two Select Scenes from Latin Leche, Brother Crush