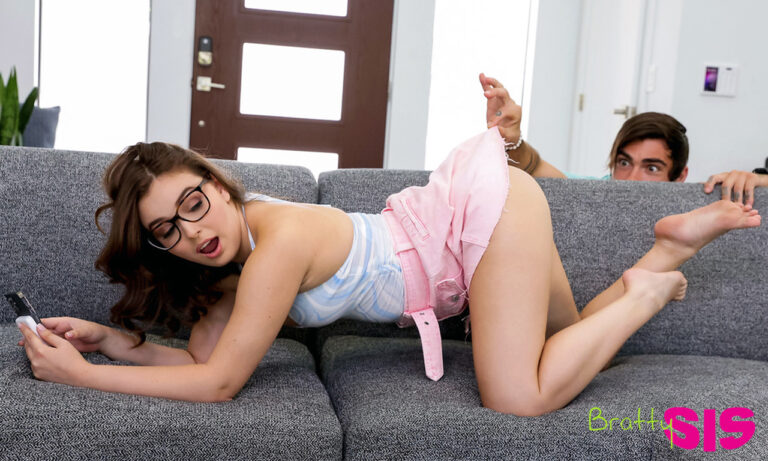 Leana is getting used to living with her stepbrother Lucky Fate. She likes to wear revealing outfits around the house, which Lucky enjoys perving on. Today, Leana is on her belly with her miniskirt hiked up to show off her panties when Lucky walks in. Since Leana doesn’t notice him, Lucky takes the opportunity to look his fill. When Leana does eventually see her stepbro, she tells him not to peak since her door doesn’t close all the way.

Lucky takes it as an invitation to instead come ogle his hot stepsister. He thinks he’s being sneaky, but he stumbles into the door. Leana tells Lucky she doesn’t know if he’s always wanted a sister or if he wants to get it on with her, then bounces into the bathroom. Lucky follows Leana, who leaves the door open just a bit . . . .

“When you love what you do it hardly ever feels like working, and on the set for BrattySis, you could tell we all loved being there,” said Lovings.
” I really felt like with BrattySis, we were a part of making something special and you can really see that in the cinematography for this shoot,” Lovings continued.  “I did my best in this work and I think the piece also reflects that in the amount of energy placed in it. Lucky Fate was a wonderful partner and we had great chemistry on set too, so I’m glad that we’ll be able to show it to everyone.”
Check out “Perving On My Stepsister – S23:E4” here ( https://brattysis.com/video/watch/150387?coupon=11552&c=0#perving-on-my-stepsister-s23e4 ).
Find Lucky Fate on Twitter: @LuckyFatex
Connect with Leana Lovings on Twitter: @LeanaLovings.
Catch Lovings on Chaturbate and join her Famclub: https://chaturbate.com/naughtynightlover/
Leana Lovings fans are invited to check her out on FreeOnes: https://www.freeones.com/leana-lovings and peruse her self-produced videos on ManyVids.
Lovings treats admirers to an unparalleled level of access via her OnlyFans account, which is updated daily with images and videos that you can’t see on her public accounts.
With her popularity skyrocketing faster than gas prices, fans are invited to subscribe to Lovings’ verified Pornhub page, view her videos and check her progress.
She is represented by AMA Modeling  / @TeamBrian2016 for East Coast shoots, and 101 Modeling / @101ModelingInc for West Coast shoots.
About Leana Lovings
One of the fastest-rising stars in adult entertainment, Leana Lovings was already an immensely popular webcam performer with over 200,000 followers on Chaturbate before taking the plunge into the World of X in September 2021.
She has brought her loving fan base with her and, in that short interval, the all-natural, 5-foot brunette beauty has reached the top 0.7% on OnlyFans and ascended to the top 100 adult stars on Pornhub, with over 74 million views on that platform alone.
Lovings grew up in the rural southeast, and attended university with double major in Biology and Psychology and a specialization in Neuroscience.  Camming represented “a way to explore my sexuality in a safe way, while creating something that feels like a very intimate and even comforting experience for the viewer,” Lovings said.
Having been raised in a religious environment, Lovings said that “sex work healed me in a lot of ways. It taught me how to care more for myself — exercise, self care — and how to have more confidence in myself.”
The sought-after starlet has already shot around 100 scenes, for studios such as Brazzers, Reality Kings, Naughty America, Team Skeet, Bang Bros, Girlfriends Films, Cherry Pimps, Lubed, Bang.com, and many more.  Her numerous Virtual Reality appearances include starring roles for industry leaders such as SexLikeReal, BangBros VR, VRBangers, VRHush, VRAllure, VR Conk and RealJamVR.
In March 2022, Lovings graced the cover of The Score Group’s iconic “18 Eighteen” magazine. She is currently the cover girl for the May issue of Hustler’s “Barely Legal” magazine.
In May, Lovings served as trophy girl at the adult industry’s X-Rated Critics Organization (XRCO) Awards in Hollywood, and was a featured speaker on two panels at the YNOT Summit.
She resides in South Florida.
Contact:
Michael Whiteacre
HoneyHouse PR
PR@HoneyHouseXXX.com
775-742-8425
Twitter: @HoneyHousePR
#   #   #
Bang Bros Bang.com brazzers Cherry Pimps Girlfriends Films Leana Lovings Lubed Naughty America Reality Kings Team Skeet
Share. Facebook Twitter Pinterest LinkedIn Tumblr Email
Previous ArticleIntroducing the 420 Expo, NJ’s First B.Y.O.C. Consumer Cannabis Convention
Next Article Meditation For Models