From veteran stage entertainers to irresistible up-and-comers, The Lee Network has the NightMoves Star Caravan covered! 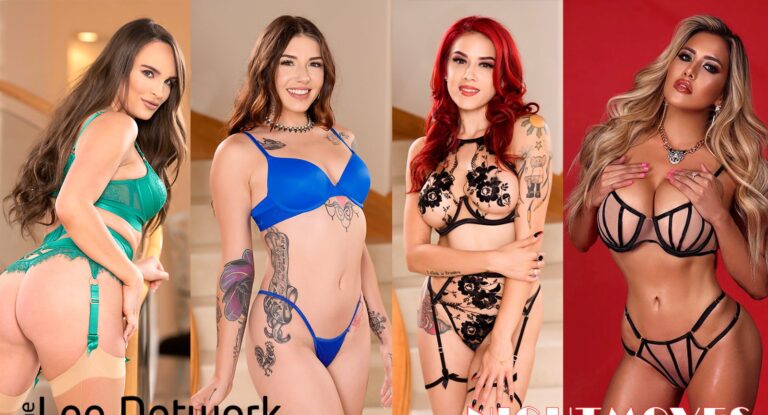 On Friday 10/7, the Lee Network Caravan travels to The Red Room (3935 Grand Blvd, New Port Richey, New Port Richey) (10pm -1am).
Then on Saturday 10/8, NightMoves brings back its popular FanFest, at Chica’s Gentlemen’s Club (4009 MLK, Tampa) from noon-6pm (autographs, merchandise sales, 1-on-1 time and more).
Later on Saturday, the Star Caravan of Lee Network stars will visit 2001 Odyssey, 2309 N. Dale Mabry Hwy,, Tampa (11pm – 2am).
Adult film up-and-comer, Brenna McKenna, who launched her feature dance career this year, said for the record: “Excited isn’t the word to describe how I feel about going to NightMoves for the first time!  I’ll be able to immerse myself in the feature entertainer lifestyle with some of the best ones doing it right now!  I consider myself lucky!”
The beautiful McKenna is also profiled in the October issue of NightMoves Magazine ( https://nightmovesonline.com ).
Adult film star and model Onyx Muse, who in 2015 she made a feature appearance at San Francisco’s Crazy Horse before officially launching her feature dance career under the guidance of The Lee Network, with an engagement at New York City’s upscale Sapphire Tims Square club.
“The chance to start my feature journey at Sapphire Times Square couldn’t have came at a more perfect time,” Muse said. “The pandemic, with all the closures of strip clubs, was such a weird new normal, especially for a market like Vegas where strip clubs never closed ever.
“I have worked in strip clubs for almost a decade, teaching myself tricks, and I have had an opportunity to take private lessons from Johana Sapakie, a professional pole choreographer who taught JLo for “Hustlers,” who helped me add more to my tool belt for my stage performances.
To perform as a feature has been a long time goal,” Muse continued, ” so as I learned to advance my dance flow it really became enjoyable to accomplish this really fun challenge. My motto is always go big with everything, so when I was contacted for Sapphire Times Square and NightMoves the feeling was beyond exhilaration or excitement, as I was more than ready. I’ve been practicing my performance and cannot wait to showcase myself at NightMoves.
Blonde sexpot Caitlin Bell, who ascended to the feature stage for the first time in August at New York’s Sapphire 60, commented, “I am so excited for my first NightMoves show! This year has held a lot of firsts for me and I never thought I’d be joining the talented ladies that are about to take over the main stage!
“Dancing is an art form and it has exploded my confidence with each and every feature engagement.  There’s going to be a lot of sexy ladies; I hope you boys can handle it!  ;-)”
Bell was profiled in the September 2022 issue of NightMoves Magazine ( https://issuu.com/nightmoves/docs/nm_finalpg_1-_80_sept_2022_website/75 )
The NightMoves Awards Show will take place on Sunday evening, October 9 at Whiskey North, 11921 N. Dale Mabry Hwy, Tampa. Red carpet starts at 6:30 .
The event will be immediately followed by the show’s Official After Party at Thee Doll House, 1010 N. Westshore Blvd, Tampa..
For more details, go to: nightmovesonline.com/nightmoves-awards-weekend-schedule/
For more information, follow NightMoves on Twitter: @NightMovesShow.
Follow The Lee Network on its new Twitter account: @LeeNetworkNV,
About The Lee Network:
Since 1989, The Lee Network has been the premier source for adult film stars, having played a leading role in shaping the feature entertainment business of the gentlemen’s club Industry around the globe. From legends of the past to stars of today, including Joanna Angel, Cherie DeVille, Jill Kassidy, Jillian Janson, Nikki Benz, Sarah Jessie, Elena Koshka, Alison Rey, Teal Conrad, Natalia Starr and Brenna McKenna, to top magazine models, showgirls, mainstream celebrities, and reality TV stars, no other agency can boast of such a star-studded lineup.
The company’s resources are unmatched, and its clients rank among the very best, most well-established and respected club owners and managers in the business — many of whom have worked with The Lee Network for over 15 years!
For a complete list of talent represented by The Lee Network, visit its official site: TheLeeNetwork.com.
Contact:
Michael Whiteacre
HoneyHouse PR
PR@HoneyHouseXXX.com
775-742-8425
Twitter: @HoneyHousePR
#  #  #
Lee Network Lee Network Stars NightMoves
Share. Facebook Twitter Pinterest LinkedIn Tumblr Email
Previous ArticlePineapple Support To Host ‘Interpersonal Effectiveness’ Support Group
Next Article Adult Time Delivers Brand-New Gay Series, Daddy’s Boy