Man of Action: Disruptive Films Swells the Ranks with The Recruit 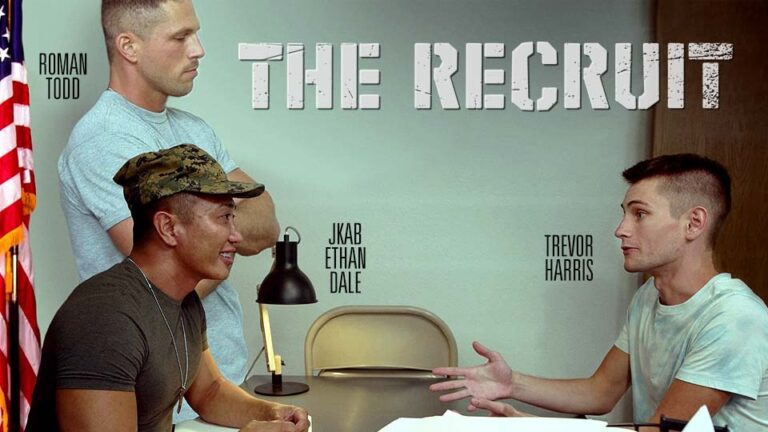 Share
Facebook Twitter LinkedIn Pinterest Email
(Montreal, QC / December 20, 2022) — Disruptive Films is celebrating the holiday season in style with five original film releases this month, including the December 23rd release of Taboo Men title The Recruit, directed by Walden Woods.
Tegan Young (Jkab Ethan Dale) is an Army recruiter who enlists Colin Dillard (Trevor Harris), a gay young man with a troubled home life and nowhere to go. When Tegan brings Colin home, where he lives with fellow soldier Rudy Vaughn (Roman Todd), Rudy is unimpressed with the ‘soft’ new recruit who “doesn’t understand real life.” But Tegan is optimistic: “You know, I wouldn’t mind if you personally indoctrinated him into the Army… teach him how to submit…”
According to Woods, “Directing this scene with this amazing cast was truly awesome; between the three of these guys, we were really able to dig into the storyline and give depth and growth to the story. Each one of these guys brought different energies to their characters, and we were really able to get insight into a few different dynamics between them all.
“Films like this one can easily be hard to tell and some touch home really hard… this one did just that. I really hope you all enjoy this film and the effort and energy the crew and cast brought to the screen.”
Producer Jessica Jasmin added, “We have had a magnificent year at Disruptive Films, and we are grateful for the opportunity to showcase the best talent in the industry and collaborate with the most talented directors. Our devoted fans have shown us so much affection and support, and we wanted to show our appreciation by packing the holiday season with the best performers and offering an extra scene as a special gift.
Fans can find The Recruit, part of Disruptive Films and Gamma Films Group/Alpha Studio Group’s exciting lineup of films, at  DisruptiveFilms.com and follow on Twitter @filmsdisruptive and @JessicaxJasmin.
About Disruptive Films:
Launched in 2021, DISRUPTIVE FILMS is a brand new studio dedicated to offering the most original gay porn movies and series available today. Our premium lineup of films and original series combine award-winning creative talent, cinematic techniques, compelling stories, and men in acting and sex performances like you’ve never seen before.  Created in collaboration by Bree Mills, Gamma Films Group, and Alpha Studio Group, the production arm behind such iconic gay brands as Next Door Entertainment, Pride Studios, and Active Duty.
About Gamma Entertainment:
Built in 1996, Gamma Entertainment is an award winning company specializing in multimedia and e-commerce. As an industry leader in web technology, Gamma partners with some of heaviest hitters in the adult production scene such as Evil Angel, Girlfriend Films, Falcon Studios, and more. A solid reputation, strong technical knowledge, and a genuine approach to building relationships are the main principles instilled in Gamma Entertainment.