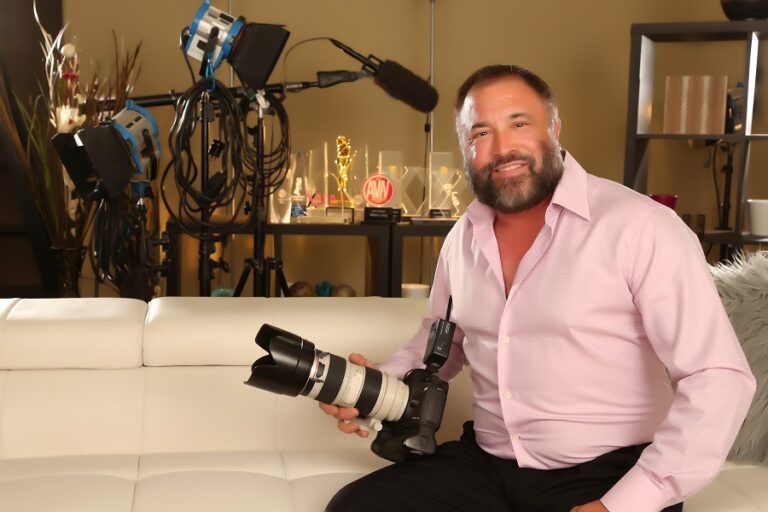 Share
Facebook Twitter LinkedIn Pinterest Email
(Las Vegas, NV / November 29, 2022) — AVN Hall of Famer Miles Long has been recognized for his exceptional industry work this year in both Mainstream and Adult with two AVN Awards nominations for 2023.
The veteran adult & mainstream producer, director, photographer and performer earned a nod for Best Directing Portfolio – Non-Narrative for his overall body of film work, and Mainstream Venture of the Year for his work with the “Lingerie Fighting Championships” (lfcfights.com), including his TV Show “Modz and Bodz” which has garnered international press coverage, and features well known female Models working on cars with him, as well as interviews with the models, and a photoshoot featuring the Model and the custom car they worked on.
“It was incredibly satisfying to find out that I had received two AVN nominations, especially since I have moved so far into the Mainstream marketspace, not only with the LFC but with the Covers and Centerfolds I have been shooting for FHM, Playboy and other magazines worldwide. It’s something many people repeatedly told me was impossible for many years, so it is especially sweet to see the fruits of all my hard work and dedication come to fruition like this. As I have always said, the only limits you have are those you set for yourself. When someone tells you that you can’t do something, they are simply saying THEY can’t, not that YOU can’t. I want to thank AVN for making a point to recognize all that I have accomplished, both inside the adult business and in mainstream in the same year, this is very, very special to me.” said Long, who will be marking his 24th anniversary in the industry – and 20th behind the camera as a director – in 2023.
Long was extremely busy directing numerous well performing titles for Bang.com and Dogfart Network this year in addition to his own personal work with Miles Long Productions and Little Dragon Pictures.  In recent news, the newly released Playboy Sweden Playmate Calendar features Miss January Eva Long and Miss June Shay Lynn, both photographed by Long.
For more info on Miles Long visit mileslong4real.com and follow him on:
Twitter:                @mileslong4real
Instagram:          @mileslong4real
Facebook:           @mrmileslong
ABOUT MILES LONG:
Miles Long is well known as an in-demand performer/filmmaker in the adult industry, with a résumé spanning over two decades alongside the biggest stars in the business. In his lengthy career, Long has earned 12 award wins, 93 nominations, 1 Triple Play Award for excellence in different 3 fields, 1 Lifetime Achievement Award and Four Hall of Fame trophies (from AVN, Urban X, NightMoves and XRCO) to cement his status as legendary talent.
Long also has a well-earned reputation as an entrepreneur and businessman, owning and operating a mainstream production company and record label while earning a living in the adult entertainment field. Long currently carries a production deal with BangBros Network, as well as distribution deals with 3rd Degree/Zero Tolerance and Juicy/Exquisite, as well as VOD and web content deals with the likes of Pornhub Premium, Clips4Sale, ManyVids, IWantClips and MyDirtyHobby.
In addition to his successful cinematic endeavors, Long is also a well-known automotive and motorcycle enthusiast with a stable of sponsored and award-winning show bikes and cars that he has hand-built himself in his spare time including: his Team PPI sponsored Noble M400 supercar with a monster custom stereo system, his dual bottle nitrous kit Drag Chopper which has been featured in commercials and booths at CES and SEMA and his one-of-a-kind 2004 Subaru Forester LH drive STi Conversion which won the 2019 ‘Best Forester’ at Subie Invasion in Las Vegas and 2021 2nd Place “Best WRX” at Las Vegas’ 360 Car Show. Learn more about Miles Long at mileslong4real.com.
# # #
MEDIA CONTACT:  BSG PR / 818.340.4422 / brian@bsgpr.com  / Twitter: @bsgpr
3rd Degree/Zero Tolerance AVN Awards BangBros Network Clips4sale iwantclips Juicy/Exquisite manyvids Miles Long MyDirtyHobby Pornhub Premium
Share. Facebook Twitter Pinterest LinkedIn Tumblr Email
Previous ArticlePineapple Support Launches Campaign for Giving Tuesday
Next Article JustFor.fans Scores Two XBIZ Nominations for 2023