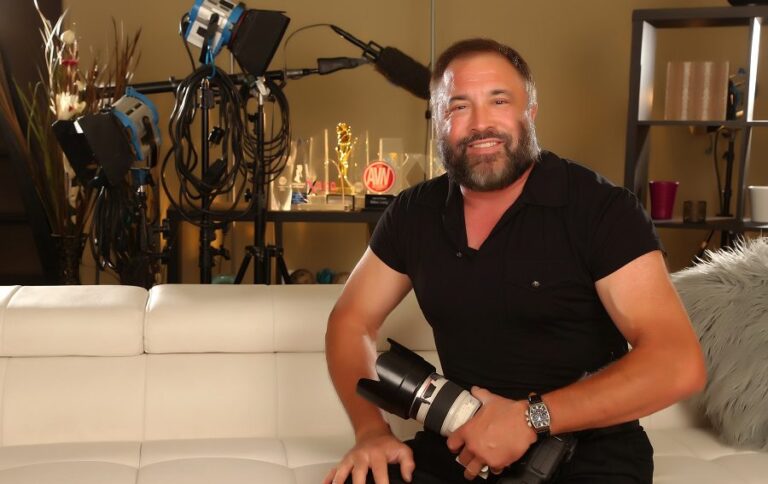 The gifted filmmaker, who was on hand Sunday night at NightMoves’ 30th annual Awards event to accept the honor for his illustrious achievements, is commemorating 23 years of outstanding work not only a Director, Producer, Photographer and Videographer for the industry’s top studios, but also for excellence in his mainstream endeavors, where he has branched out into photography for dozens of Covers and Centerfolds for publications such as FHM and Playboy, including the October Cover of FHM Australia, and the October Playmate Layout for Jenna Starr in Playboy Sweden, as well as dozens of international news outlets this year.

“I’d like to thank all of the performers who have worked with me, all the crew that has worked with me, all my friends and Mentors and especially all the companies that have hired me all these years. In Life, in Work and in FB Groups there will always be people who will tell you that you can’t do things. NEVER listen to them,” said Long.

“When people tell you that you can’t do things, it doesn’t mean YOU can’t do it, it means THEY can’t, nothing more. NEVER limit yourself or your dreams to what other people will never accomplish. Blaze your own trail and Live Your Best Life and everything else will fall into place.” said Long in a heartfelt acceptance speech that moved the crowd.

“To be able to achieve success is amazing, of course, but to be able to sustain it and grow over the years until one day you’re on stage accepting a Lifetime Achievement Award, it’s more than I could have ever imagined. Thank you to NightMoves, as well the performers, crew and companies that I’ve been so blessed to work with, for believing in me.”

Long has also expanded into professional work for his own Mainstream TV shows, Billboards for Nightclubs & Casinos, Ads for numerous mainstream companies and Co-Branded Partnership opportunities and Social Media posts with Automotive Performance companies featured on the stable of custom Show Cars and Show Bikes he has hand built.

He is also a familiar face within the NightMoves universe for his ‘Up Close and Personal’ Q&A interviews with adult’s top film stars, offering unique insight into the business and its creators from an insider’s perspective at NightMovesOnline.com.
For more info on Miles Long visit mileslong4real.com and follow him on:
Twitter:                @mileslong4real
Instagram:          @mileslong4real
Facebook:           @mrmileslong
ABOUT MILES LONG:
Miles Long is well known as an in-demand performer/filmmaker in the adult industry, with a résumé spanning two decades alongside the biggest stars in the business. In his lengthy career, Long has earned 12 award wins, 88 nominations and Four Hall of Fame trophies (from AVN, Urban X, NightMoves and XRCO) to cement his status as legendary talent.
Long also has a well-earned reputation as an entrepreneur and businessman, owning and operating a mainstream production company and record label while earning a living in the adult entertainment field. Long currently carries a production deal with BangBros Network, as well as distribution deals with 3rd Degree/Zero Tolerance and Juicy/Exquisite, as well as VOD and web content deals with the likes of Pornhub Premium, Clips4Sale, ManyVids, IWantClips and MyDirtyHobby.
In addition to his successful cinematic endeavors, Long is also a well-known automotive and motorcycle enthusiast with a stable of sponsored and award-winning show bikes and cars that he has hand-built himself in his spare time including: his Team PPI sponsored Noble M400 supercar with a monster custom stereo system, his dual bottle nitrous kit Drag Chopper which has been featured in commercials and booths at CES and SEMA and his one-of-a-kind 2004 Subaru Forester LH drive STi Conversion which won the 2019 ‘Best Forester’ at Subie Invasion in Las Vegas and 2021 2nd Place “Best WRX” at Las Vegas’ 360 Car Show. Learn more about Miles Long at mileslong4real.com.
###
MEDIA CONTACT:  BSG PR / 818.340.4422 / brian@bsgpr.com  / Twitter: @bsgpr
2022 Lifetime Achievement Award director Hall of Fame Lifetime Achievement Award Mainstream TV shows Miles Long NightMoves
Share. Facebook Twitter Pinterest LinkedIn Tumblr Email
Previous ArticleDan Hogue is this Weeks Guest on Adult Site Broker Talk
Next Article Red Umbrella Talk Touts Successful Season One, Begins Production on Season Two