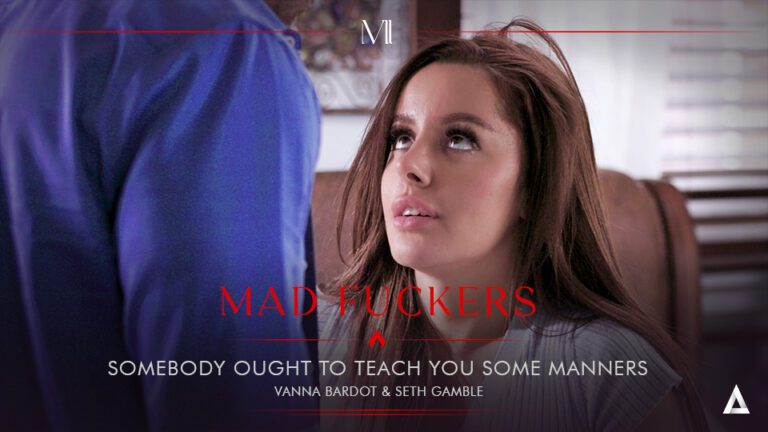 Share
Facebook Twitter LinkedIn Pinterest Email
(Montreal, QC / June 23, 2022) — Modern-Day Sins is exploring the depravity of wrath with an all-new episode released on June 19 from the series Mad Fuckers, “Somebody Ought To Teach You Some Manners”.
Vanna Bardot plays a bratty young woman who is spending the summer with her best friend. While she is expected to do chores and pull her weight around the house, she’d rather just hang out and do nothing. After all, it’s summer vacation! Her friend’s father (Seth Gamble) is not amused, and decides that it’s about time she learns a lesson… the hard way.
“Spanking fans will have a lot to love about this newest Mad Fuckers release,” promised 3X West, the brand’s showrunner. “Vanna plays her role as a brat to perfection, and does a great job of pretending to ignore Seth’s spanking and thrusting while she continues to text on her cellphone. But don’t be fooled by her indifferent acting – once her character puts down the phone, Vanna gives as good as she gets – she’s one of the best starlets in the industry, and this scene does a great job of showing off her full range!”
Find Modern-Day Sins’ Mad Fuckers series, including “Somebody Ought To Teach You Some Manners”, at ModernDaySins.com and AdultTime.com to take advantage of unlimited access to more than 320 channels, 59,000 episodes and 8 new releases per day of the network’s award-winning brands.
About Modern-Day Sins:
Modern-Day Sins is a dramatic series that gives popular, raunchy porn stories & sex a glossy, sophisticated makeover. Brought to you by the team behind studios like Pure Taboo and Girlsway, Modern-Day Sins is exclusive to members of the Adult Time streaming platform, which include many other acclaimed series and award-winning films.
:
Launched in 2018, Adult Time is a streaming service exclusively for adults.  Created by award-winning filmmaker Bree Mills, who also serves as Chief Creative Officer, Adult Time is a platform built by fans that believe in a future where mature audiences can safely, securely, and proudly have a place in their lineup for premium adult content.
Dubbed the ‘Netflix of Porn’ by mainstream media outlets, Adult Time offers an extensive catalog of more than 320 channels, 59,000 episodes and 8 new releases per day from some of the most recognized studios, including Girlsway, Pure Taboo, Burning Angel, Fantasy Massage, 21 Sextury and Vivid Entertainment, alongside exclusive original series, feature films and much more.
For more information, please visit:
https://www.moderndaysins.com
https://www.adulttime.com
Follow on Twitter & Instagram:
@adulttimecom
@thebreemills
Media Inquiries:
Brian Gross
BSG PR
818-340-4422
[email protected]
# # #
adult time Mad Fuckers modern-day sins
Share. Facebook Twitter Pinterest LinkedIn Tumblr Email
Previous ArticleDark Odyssey’s Fusion Sells Out
Next Article Arietta Adams Returns to Brazzers in Wild New Ensemble Scene