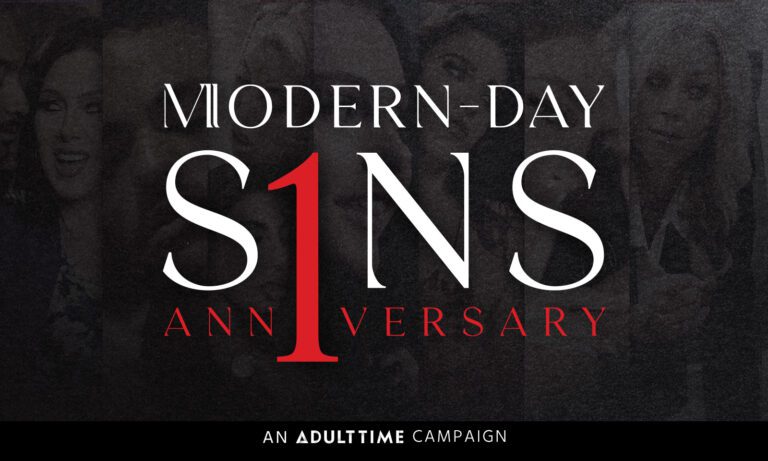 Share
Facebook Twitter LinkedIn Pinterest Email
(Montreal, QC / January 12, 2023) — Award-winning Adult Time Studio Modern-Day Sins is celebrating its first successful year on the AdultTime.com platform with seven days of super-special New Year deals!
Revel in seven sinful days of discounts starting January 12th through the 19th at only $7.00 a month, as Modern-Day Sins continues to nourish the engagement of existing Adult Time members while also bringing awareness of the brand to all-new audiences.
“It’s hard to believe that a year has gone by already,” said 3X West, the studio’s showrunner. “But what a launch year it’s been! We were thrilled and humbled to hit the ground running with several of our episodes going viral in 2022 and reaching the eyes of millions of viewers. We also had the honor of our new studio being nominated for best new studio by both XBIZ and AVN. And of course, we’ve had the distinct pleasure of working with many of the top, top names in the industry and collaborating with them on some absolutely eye-popping releases. We hope that these milestones are just the beginning for Modern-Day Sins – and that the love of our fans will keep the brand going strong for years to come. Make sure you keep skipping church each Sunday to watch our latest releases, because 2023 is going to be a hell of a year!”
The assortment of seven sin-themed anthologies launched in January 2022 from Modern-Day Sins includes Anal Envy, Lust Triangles, Greedy Creampies, Proud Pervs, Cum Gluttons, Mad Fuckers and Idle Fantasies. The sacrilegious studio is setting the stage for fans to experience over-the-top excess in new episodes releasing every Sunday.
Find Modern-Day Sins at ModernDaySins.com and AdultTime.com to take advantage of unlimited access to more than 360 channels, 61,000 episodes and 8 new releases per day of the network’s award-winning brands.
About Modern-Day Sins:
Modern-Day Sins is a dramatic series that gives popular, raunchy porn stories & sex a glossy, sophisticated makeover. Brought to you by the team behind studios like Pure Taboo and Girlsway, Modern-Day Sins is exclusive to members of the Adult Time streaming platform, which include many other acclaimed series and award-winning films.
About Adult Time:
Launched in 2018,RAdult Time is a streaming service exclusively for adults. Created by award-winning filmmaker Bree Mills, who also serves as Chief Creative Officer, Adult Time is a platform built by fans who believe in a future where mature audiences can safely, securely, and proudly have a place in their lineup for premium adult content.
Dubbed the ‘Netflix of Porn’ by mainstream media outlets, Adult Time offers an extensive catalog of more than 300 channels, 57,000 episodes and 8 new releases per day from some of the most recognized studios, including Girlsway, Pure Taboo, Burning Angel, Fantasy Massage, 21 Sextury and Vivid Entertainment alongside exclusive original series, feature films and much more.
For more information, please visit:
http://www.adulttime.com
https://www.moderndaysins.com
Follow on Twitter & Instagram:
@adulttimecom
@thebreemills
Media Inquiries:
Brian Gross
BSG PR
818-340-4422
brian@bsgpr.com
# # #
21 Sextury burning angel Fantasy Massage girlsway modern-day sins Promo Deals Pure Taboo Vivid Entertainment
Share. Facebook Twitter Pinterest LinkedIn Tumblr Email
Previous ArticleJohn Legendary Returns to X3 for 2nd Appearance & Attending XBIZ Awards as Nominee
Next Article TeamSkeet Presents 13 Scorching New Scenes to Try on For Size