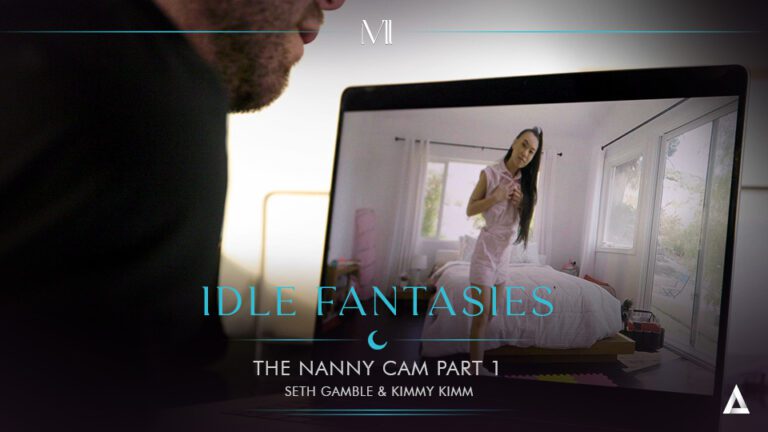 Share
Facebook Twitter LinkedIn Pinterest Email
(Montreal, QC / July 25, 2022) — Seth Gamble succumbs to the charms of petite cutie Kimmy Kimm when he hires her for childcare duty and gets way more than he bargained for in Modern-Day Sins’ newest release from Idle Fantasies, “The Nanny Cam Part 1”.
The channel’s first-ever multi-part story (with Part 2 coming soon!), kicks off with busy dad Gamble betting on his gorgeous nanny making life easier for his family so he can focus on his working from home… but he can’t help but sneak a peek at his new hire on the nanny cam to watch her in action.
Kimm, however, is onto his hidden camera trick, and proceeds to tease Gamble with a private strip show just for him, progressing to a wild solo display that drives the horny husband into a state of flustering frustration. Will he take the bait?
“We are very eager to see what fans think of our first two-part saga on Modern-Day Sins,” says the brand’s showrunner 3X West. “Adult Time is known for its story-focused content and we want Modern-Day Sins to be no exception. We’re always exploring different ways to tell more complex and nuanced stories beyond what can be accomplished via stand-alone episodes – we’ve done full length films, prequels, sequels, spiritual-sequels, and even fully interconnected season-long arcs like in mainstream television. We love to do porn differently by letting the story dictate the episode count, instead of the other way around. So hopefully audiences will be eager to see how the story and characters evolve as the iconic Spencer Scott joins the cast for part 2 releasing in the coming weeks!”
Find Modern-Day Sins at ModernDaySins.com and AdultTime.com to take advantage of unlimited access to more than 320 channels, 60,000 episodes and 8 new releases per day of the network’s award-winning brands.
About Modern-Day Sins:
Modern-Day Sins is a dramatic series that gives popular, raunchy porn stories & sex a glossy, sophisticated makeover. Brought to you by the team behind studios like Pure Taboo and Girlsway, Modern-Day Sins is exclusive to members of the Adult Time streaming platform, which include many other acclaimed series and award-winning films.
About Adult Time:
Launched in 2018, Adult Time is a streaming service exclusively for adults.  Created by award-winning filmmaker Bree Mills, who also serves as Chief Creative Officer, Adult Time is a platform built by fans that believe in a future where mature audiences can safely, securely, and proudly have a place in their lineup for premium adult content.
Dubbed the ‘Netflix of Porn’ by mainstream media outlets, Adult Time offers an extensive catalog of more than 320 channels, 60,000 episodes and 8 new releases per day from some of the most recognized studios, including Girlsway, Pure Taboo, Burning Angel, Fantasy Massage, 21 Sextury, and Vivid Entertainment, alongside exclusive original series, feature films, and much more.
For more information, please visit:
https://www.moderndaysins.com
https://www.adulttime.com
Follow on Twitter & Instagram:
@adulttimecom
@thebreemills
Media Inquiries:
Brian Gross
BSG PR
818-340-4422
[email protected]
# #  #
21 Sextury burning angel Fantasy Massage girlsway Kimmy Kimm Pure Taboo Seth Gamble Vivid Entertainment
Share. Facebook Twitter Pinterest LinkedIn Tumblr Email
Previous ArticleViolet Myers Shows Star Power with 2 Urban X Awards Noms & Her Fans Can Help Her Win!
Next Article Lauren Phillips Scores Coveted Urban X Awards Nom for Porn Star of the Year