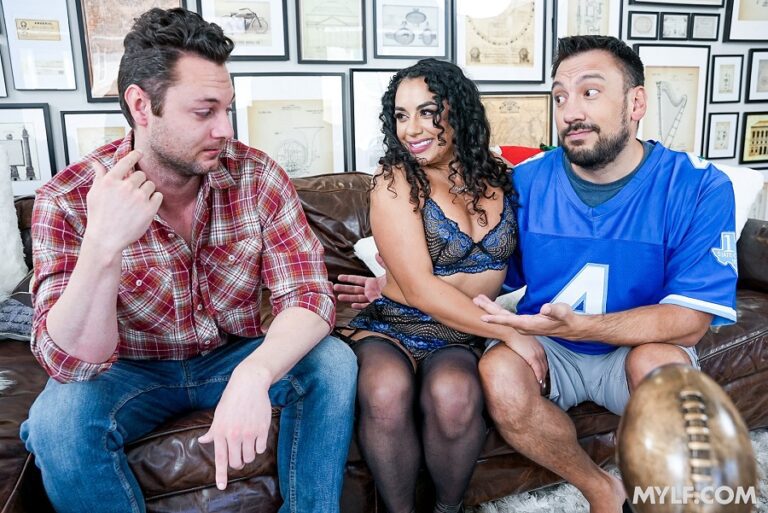 Share
Facebook Twitter LinkedIn Pinterest Email
(Los Angeles, CA / September 16, 2022) — Brianna Bourbon is giving her all to “Get Him at Any Cost” when she offers Brad Sterling a golden opportunity in the latest fantasy football-themed scene from The Draft, exclusively for MYLF series MomDrips.com.
Brianna and her husband (Bobby Beefcakes) hatch a wild plan when their favorite football player is already taken by their friend Brad Sterling in his fantasy draft… but they want him more and are willing to do anything to get the football superstar on their fantasy draft instead.

“He’s the best, which is why I want him on my team,” says Brad, while Bobby admits that the sports star is Brianna’s ‘hall pass’. “You know Brianna, she’s kind of ‘freaky’, if you know what I mean,” as Brianna strolls into the living room wearing her finest lacy lingerie. “We have a little proposition for you if you wanted to make some deals before Draft Day?”

“Get Him at Any Cost” is available on the MYLF.com streaming platform, part of The Draft multi-series session, which kicks off with TeamSkeet’s Family Strokes title, “Dynasty Nerd”.

Right now, fans can tackle fall football MYLF-style by joining in the fun with a special sales event where new members can get enjoy a six-month membership deal for only 55 cents a day. Ready to roll?