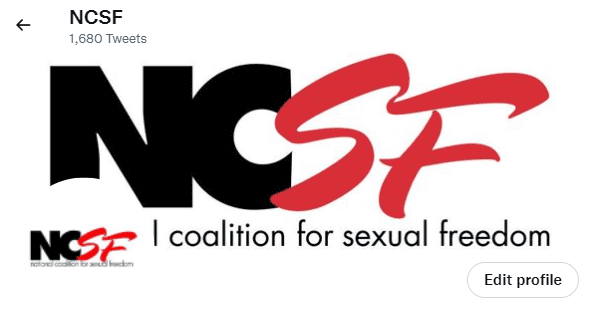 For 25 years, the National Coalition for Sexual Freedom (NCSF) has posted our Media Updates with mainstream articles about kink and polyamory to encourage people to advocate for accurate media coverage about our constituencies. We post the links to the articles on Twitter, and also retweet our member groups.

On March 8, 2021, a social media volunteer discovered that our Twitter account @NCSF had been suspended without any notification. NCSF’s Chairperson, Tess Zachary, reached out to Tech Support to find out why, and they directed her to Customer Support to appeal the suspension.

Two months later, we received identical emails on May 7 and May 13 stating:

“We’re writing to let you know that your account has been suspended—and will remain suspended—due to multiple or severe violations of our platform manipulation rules.

“Please do not respond to this email as it is not monitored.”

NCSF reached out to the Free Speech Coalition and to an attorney with the Electronic Frontier Foundation but they had no recommendations for dealing with this kind of deplatforming. We spoke to a reporter referred by the FSC who was investigating a story on groups who have been deplatformed. We also put the word out among our member groups and professionals, to see if there were any ideas of what we could do.

On August 9th, Kaz Riley with Trancing in the Sheets posted a video about how she complained directly to Jeff Bezos at Amazon about the deplatforming of her educational book, Woman: How to Find, Understand and Embrace Your Sexual Pleasure. Amazon had labeled Woman as erotica which made the book unsearchable. The only option Amazon gave was to change the educational sketches in the book. However, after she emailed Bezos, all of the restrictions on Woman were lifted by Amazon.

The next day, the Executive Director of NCSF, Susan Wright, emailed Jack Dorsey, then CEO of Twitter, and told him about NCSF and our work:

I’m writing to you because we’ve tried everything. Our NCSF Twitter account was deplatformed and we can’t get anyone to tell us why.

NCSF is the advocacy org for the kink and non-monogamy communities. We’re activists! I don’t understand why you’ve deplatformed us. We’ve been around since 1997 fighting for the rights of the alt-sex communities, and we’ve worked with the American Psychological Association and the American Law Institute to stop institutionalized discrimination against kinky people so we don’t lose our children or our jobs – www.ncsfreedom.org

Why take us down? We’re fighting for you, and for everyone else, against the idea that we can’t control our own bodies. There’s no reason to discriminate against our grassroots org. We are all volunteers, all heart, fighting for our rights. Having to fight against social media, too, is just too much.

I know you understand. Please reinstate our Twitter account. It’s so important that we tell everyone about the new Model Penal Code on Sexual Assault that we helped revise that now has a legal framework for Explicit Prior Permission for consent to kink. I would love to tell you about it, and tweet about it!

Thank you for listening,

The next day, on August 11th, NCSF’s Twitter account @NCSF was reinstated. We never did hear back from anyone at Twitter—our account was restored as silently as it had been removed.