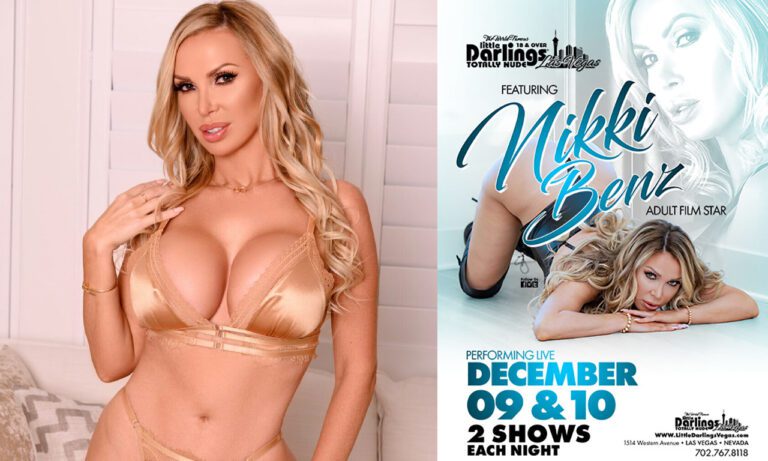 Share
Facebook Twitter LinkedIn Pinterest Email
(LAS VEGAS, Nev. / December 9, 2022) — Adult film superstar Nikki Benz is pleased to announce that she be the feature entertainer at the World-Famous Little Darlings gentlemen’s club in Las Vegas, performing two shows nightly this Friday and Saturday, December 9 – 10.
“I am beyond excited to return to Las Vegas to feature dance,” said Benz. “I haven’t danced in Vegas in a long time, and I am super-excited to see all my fans!”
Each night after her dance performances, fans (a.k.a. #BenzMafia) will be able to get an autograph or picture with the legendary star, as well as purchase some of her keepsake collectible merchandise.

Find about more about the club’s amenities, VIP packages, and free transportation to the night spot, or download a VIP Pass for Vegas locals at littledarlingsvegas.com/stripclub or call (702) 366-1141.

Little Darlings is located at 1514 Western Avenue in Las Vegas.

Monday – Saturday – 11AM to 6AM
Sunday – 6PM to 4AMshares intimate details of her personal life and dishes valuable advice as a featured guest on the latest episode of SOSCast, hosted by financial specialist Adam Sosnick.

To learn more about Nikki Benz, visit NikkiBenzFans.com.
Professional producers wishing to book Nikki Benz may contact Direct Models via its website ( https://ladirectmodels.com/direct-models/nikki-benz/ ) or by calling 323-850-5888.
Benz is represented by The Lee Network ( https://theleenetwork.com/models/nikki-benz/ ) for feature dance appearances.  For bookings, please contact The Lee Network by calling (323) 850-6111, or email derek@theleenetwork.com.
Nikki Benz’s #BenzMafia is invited to connect with her on Twitter: @nikkibenz, Instagram: @nikkibenz and OnlyFans ( http://onlyfans.com/nikkibenz ).
About Nikki Benz:
The most successful adult performer to ever come out of Canada, Nikki Benz’s status as one of the elite stars in the adult film galaxy is reflected by her enormous social media presence on Instagram (5.3 million followers), Facebook (nearly 2 million followers) and Twitter (more than 1 million followers), and her more than 229 million views on Pornhub.
Benz parlayed her good looks, natural talent, strong work ethic and keen business sense into a dynamic and highly successful career. The popular exotic dancer and glamour model from Toronto launched her adult career when she answered a ‘Models Wanted’ ad posted by legendary director/producer Jim Gunn, who shot her for Pleasure Productions’ all-girl series “Strap-On Sally.”
Today Benz is a bona fide superstar who has appeared in hundreds of productions and graced the pages of virtually every men’s magazine – she was Penthouse’s April 2010 Pet of the Month, 2011 Pet of the Year, and May 2006’s Hustler Honey. These days, the star keeps busy producing new content on her OnlyFans account / NikkiBenzFans.com, and select studios.
Then iconic star has also appeared in high-profile mainstream projects such as Fox Sports’ web series “Cubed,” video game “Saints Row” and feature film “Pain & Gain” with The Rock and Mark Wahlberg, and the 2022 Hulu series “Pam & Tommy.”
In January 2020 she hosted the AVN Awards Show in Las Vegas.
About The Lee Network:
Since 1989, The Lee Network has been the premier source for adult film stars, having played a leading role in shaping the feature entertainment business of the gentlemen’s club Industry around the globe. From legends of the past to stars of today, including Joanna Angel, Cherie DeVille, Jill Kassidy, Jillian Janson, Nikki Benz, Sarah Jessie, Elena Koshka, Alison Rey, Teal Conrad, Natalia Starr and Brenna McKenna, to top magazine models, showgirls, mainstream celebrities, and reality TV stars, no other agency can boast of such a star-studded lineup.
The company’s resources are unmatched, and its clients rank among the very best, most well-established and respected club owners and managers in the business — many of whom have worked with The Lee Network for over 15 years!
For a complete list of talent represented by The Lee Network, visit its official site: TheLeeNetwork.com.
Contact:
Michael Whiteacre
HoneyHouse PR
PR@HoneyHouseXXX.com
775-742-8425
Twitter: @HoneyHousePR
#   #   #
Headlines Little Darlings Las Vegas Nikki Benz
Share. Facebook Twitter Pinterest LinkedIn Tumblr Email
Previous ArticleA new ultralow-cost airline aims to test the transatlantic market
Next Article New at ORION Wholesale: Erection enhancer with a ball massage from REBEL