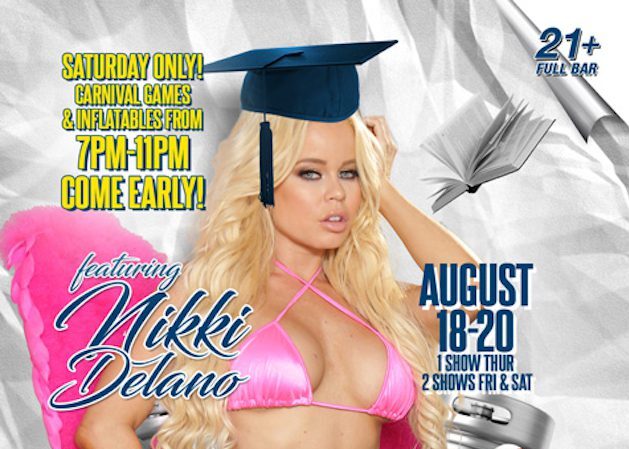 Share
Facebook Twitter LinkedIn Pinterest Email
(Los Angeles, CA) This weekend, award-winning Latina adult superstar, radio show host, and one of the most sought-after feature entertainers, Nikki Delano, will be appearing at Larry Flynt’s Hustler Club in St. Louis for three incredible nights, this Thursday, August 18th through Saturday, August 20th.
Larry Flynt’s Hustler Club is celebrating their 5th Annual Back 2 School Carnival, and Nikki Delano will be helping them celebrate with a three-night feature. She’ll have one live stage show on Thursday night, and on Friday and Saturday nights, she’ll be lighting up the main stage with two of her high-energy shows. Saturday is the Carnival, which will have games, inflatables, and drink specials from 7pm to 11pm, and early arrival is suggested. Each night of Nikki’s feature, she’ll have multiple meet and greets where fans can meet the superstar, snap a selfie with her, buy exclusive merch, and/or get the ultimate Nikki Delano experience by purchasing a VIP lap dance. Fans and club patrons can also purchase her Fleshlights, Fantastico and Fuego and get them personally autographed.
“It’s back to school time, and carnivals are always a blast. I’m excited to be part of Hustler Club’s celebration this weekend and know it’s definitely going to be a full house all three nights. So don’t miss out on all the fun and get there early. And be ready for my special themed shows and maybe even get called on stage,” says Nikki Delano.
Known as St. Louis’ hottest strip club, Larry Flynt’s Hustler Club is the best strip club in the area. The premiere gentlemen’s club has tasteful décor, friendly staff, beautiful women, full bar, and a must-see venue. VIP bottle service and advance reservations are available by calling 618.874.9334. View their party packages, including admission, libations, VIP dances, and more, at stlouishustlerclub.com. The club is located at 5420 Bunkum Road in Washington Park, Illinois, and is open until 4am on Thursday, and 6am Friday and Saturday.
Get Nikki on the stage of your gentlemen’s club by booking her through the Lee Network. Go to theleenetwork.com and click on “Contact Us” to reach her agents. Or visit Nikki’s page  theleenetwork.com/models/nikki-delano and use the booking form there.
To interview Nikki Delano for your site, publication, or show or book her for mainstream projects, contact Erika Icon of The Rub PR at [email protected].
ABOUT NIKKI DELANO
Exotic bombshell Nikki Delano is a fireball and a mix of Puerto Rican, Colombian, and Italian. The luscious Latina is an international cover model featured in a six-page spread in Maxim, as well as Lowrider Magazine, Cosmo Latina, Hustler, and Playboy’s Top 50 Porn Stars on Instagram.
Nikki hosted the #1 adult radio show in the world on Vivid SiriusXM 415 for five years. She’s headlined at top gentlemen’s clubs across the country and Europe and is one of the most sought-after performers. Her fans worldwide have helped her become one of the top verified social media icons with millions of followers. 2020 marked a pinnacle in her career with the launch of her Fantastico and Fuego Fleshlight® toys Fleshlight.com/NikkiDelano that are replicas of her award-winning ass and infamous pussy. In 2021, Nikki became an Ambassador and NFT creator for Splash.Porn, and launched her highly-collectible handmade glass bong from Upcycle Glass nikkidelano.upcycleglass.com.
Nikki’s a world-famous porn star who’s performed in over 500 XXX movies for top-shelf adult studios, Cinemax, and HBO. She gained popularity on Latin mainstream TV and has been featured on Telemundo, Univision, Estrella, and her Brazilian Global TV biopic “In My Skin.” She’s received countless awards and accolades from AVN, XBIZ, Pornhub, Fleshbot, Exotic Dancer, Urban X, NightMoves, and LAL Awards, including Best Latin American Pornstar and an induction into the NightMoves Hall of Fame. But is it real
She’s known for her incredible physique and passion for fitness. Nikki holds a Bachelor’s in Forensic Psychology with a minor in Addiction Studies and Criminology. Keep up with everything in her world by following her on Twitter and Instagram at @nikkidelano and “liking” her Facebook Fan Page facebook.com/therealnikkidelano. Sext with her on SextPanther textnikkidelano.com. Get a membership for exclusive photos and videos Only Fans onlyfans.com/nikkidelano. Get exclusive glimpses into Nikki’s daily life with stories, exclusive videos, and photos on her Brazzers+ nikkidzzplus.com. Subscribe to her Premium Snap and/or FanCentro fancentro.com/nikkidelano. Check out her Verified Porn Star account on Pornhub pornhub.com/pornstar/nikki-delano. And find links to everything Nikki Delano at linktree.com/NikkiDelanox.
advance reservations autograph Back 2 School Carnival exclusive merchandise fans Fantastico feature Fleshlights Fuego gentlemen’s club Larry Flynt’s Hustler Club live shows meet and greets Nikki Delano patrons selfies St. Louis superstar VIP bottle service VIP lap dance
Share. Facebook Twitter Pinterest LinkedIn Tumblr Email
Previous ArticleAdult Time’s ASMR Fantasy Uncovers a Real Doll in “Fixing You – Sexbot Repair Diagnostic!”
Next Article Kimber Haven Focuses on Her LoyalFans & Debuts the Randy Raunch Show