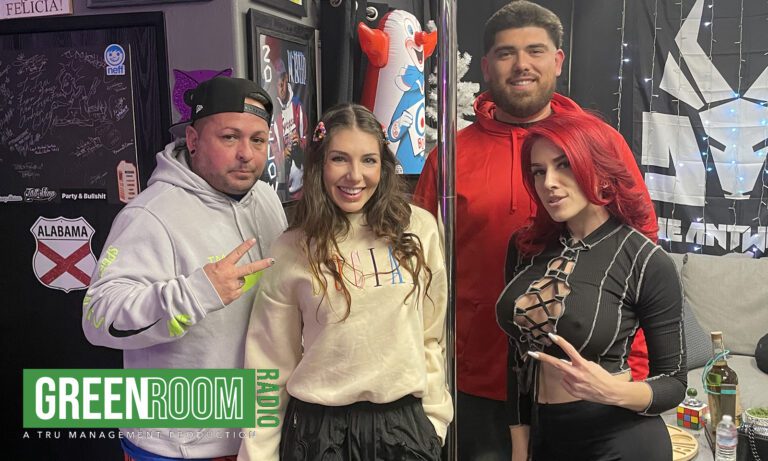 “Blessed to have Brenna come to my show as she’s an incredible rising star in the adult industry,” said Muse. “Ever since I met her at the NightMoves Show, I have known that she’s a great new talent with a super cool attitude who has longevity in her vision.
“Brenna really treats this business like a professional, and upon every opportunity that comes her way she places her stamp that she is not one to be forgotten. I wish her so much success in her career, and I have so much love for this girl as a person and as well as an amazing rising star!”
McKenna cemented, “It was my absolute honor to be on Onyx and Tru’s podcast! She and I have shared amazing experiences, between feature dancing and conventions, and I love that we were able to bond again and share for the world to see!”
Enjoy “Green Room Radio Episode 41 with Special Guest Brenna McKenna” on YouTube, PodBean, Spotify, and Apple Podcasts .

Brenna McKenna fans are invited to check her out on FreeOnes: freeones.com/brenna-mckenna.
McKenna treats admirers to an unparalleled level of access via her OnlyFans account, which is updated daily with images and videos that you can’t see on her public accounts.
About Brenna McKenna:
One of the most classically beautiful women to ever grace adult films, Brenna McKenna is also a supernova of sexual energy and positive attitude.
Born and raised on the southern end of the great state of New Jersey, Sunday churchgoer McKenna attended a private high school on a softball scholarship before putting herself through college in Philadelphia as a stripper. After earning her business degree in Fashion Industry Management, she realized that she loved exotic dancing so much, she decided to make it her career.
For the 21 year-old, stripping had opened a path on her life’s journey of exploring her hitherto unexcavated sexual powers. But when the COVID pandemic panic came, and gentlemen’s clubs were shuttered, McKenna pivoted to OnlyFans. She eventually reached out to an adult talent agency, and filmed her debut porn scenes in March 2021.
Since then, the magnetic performer has divided her work time between the Los Angeles, Las Vegas and Miami filming hubs, producing her own content and starring in productions by Bang Bros, LeWood, Bang!, Mike Adriano, She Seduced Me, Team Skeet, FreakMob Media, Sex Selector, Perv City, Swallowbay, and many more.
With years of stripping experience under her belt, McKenna has also moved into feature dancing by signing with industry leader The Lee Network and debuting at New York City’s famed Sapphire 60 gentlemen’s club in June 2022.  In October she was a presenter as the 30th annual NightMoves Awards in Tampa, Florida, and she returned to New York City to headline Sapphire Times Square in December.
The inked dynamo is currently celebrating the first award nominations of her young career, from the 2023 AVN Awards.
The powerhouse performer famous for her love of sex was recognized with a nod for Best Oral Sex Scene for her epic, exceptionally messy performance in “A Lady With a Schedule” ( https://www.teamskeet.com/movies/a-lady-with-a-schedule ) from Team Skeet’s This Girl Sucks sub-site.
McKenna is also up for Hottest Newcomer in the AVN Awards’ Fan Voting competition.  Admirers can vote daily for her here ( https://avn.com/awards/voting/hottest-newcomer ).
Brenna McKenna is available for professional bookings directly, or via Zen Models.

She is represented by The Lee Network for feature dance appearances.