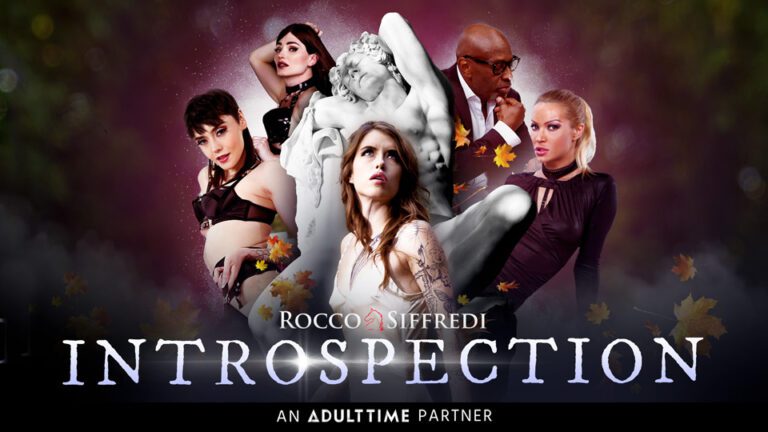 Share
Facebook Twitter LinkedIn Pinterest Email
(Montreal, QC / June 30, 2022) — Rocco Siffredi announces the highly-anticipated June 30 release of his newest eye-popping feature film, Introspection, where digging deep into the heart of who you are reaps big rewards.
Rising star Eden Ivy plays a woman with a compulsion: the lithe brunette beauty is obsessed with anal sex and searching for the reason why. She also has a bit of an obsession with a therapist (Mike Chapman) she’s been stalking lately. She sends a series of provocative videos to grab his attention, and one day he takes the bait, her story begins in a long interview punctuated by flashbacks of sexual encounters from her past.
“The reason why I decided to do this movie is that an Italian sculptor called Fabio Viale made a monumental statue of me as a tribute to my career,” said Siffredi. “It’s 1.5 times the size of a human and was created in ancient Greek style to represent sexuality. The artist decided to sculpt the face and the body exactly the way I am in front of the camera. When it was finished, he told me, ‘It’s ready, now please give life to it’. And the only thing I could think of is to make a movie around this statue.
“While I was thinking about the storyline, I realized that this statue undoubtedly represents me, just like I represent sexuality without limits… so I decided not to put limits on this movie either. For Introspection I wanted a truly original story with charismatic main characters.”
Of his star, Eden Ivy, Siffredi said that “when I looked into her eyes I couldn’t believe how beautiful she was. I was like, ‘Wow, this girl is stunning! She looks like a top model’. Then I saw all those great tattoos covering half of her body and her sexuality: she was always playing with her ass, completely involved with anal sex. That’s when I said to myself, “She’s probably the only person who is able to ride this huge marble statue with her ass.
“I called her and asked if she would want to do this movie with me; I was sure she would be amazing. She said yes, so I immediately started writing the script. The story is simple, because it’s almost based on her real life. I took elements from her real life and put them in front of the camera.”
Rocco Siffreddi’s Inspection is available as a five-part series at RoccoSiffredi.com and on the AdultTime.com streaming platform. Join now to access the full library of more than 59,000 scenes, 320 channels and 8 new releases per day – of the network’s award-winning brands.
About Adult Time:
Launched in 2018, Adult Time is a streaming service exclusively for adults. Created by award-winning filmmaker Bree Mills, who also serves as Chief Creative Officer, Adult Time is a platform built by fans who believe in a future where mature audiences can safely, securely and proudly have a place in their lineup for premium adult content.
Dubbed the ‘Netflix of Porn’ by mainstream media, Adult Time offers an extensive catalog of more than 320 channels, 59,000 episodes and 8 new releases per day from some of the most recognized studios, including Girlsway, Pure Taboo, Burning Angel, Fantasy Massage, 21 Sextury and Vivid Entertainment alongside exclusive original series, feature films and much more.
For more information, please visit:
http://www.adulttime.com
Follow on Twitter & Instagram:
@adulttimecom
@thebreemills
Media Inquiries:
Brian Gross
BSG PR
818-340-4422
brian@bsgpr.com
# # #
AdultTime.com film Introspection Rocco Siffredi RoccoSiffredi.com
Share. Facebook Twitter Pinterest LinkedIn Tumblr Email
Previous ArticleOEJ Novelty Introduces ‘How-To’ Video Series on New YouTube Channel
Next Article Sparks Entertainment Rolls Out the Red Carpet for Maid to Kill World Premiere