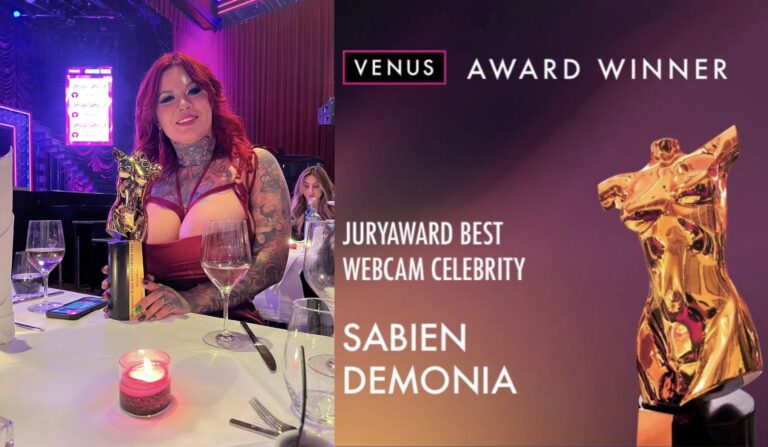 Share
Facebook Twitter LinkedIn Pinterest Email
(Barcelona, Spain) Eastern European tatted, busty, red-haired vixen, content creator, fetish model, adult star, and entrepreneur Sabien Demonia was a big part of the Venus Berlin tradeshow, events, and parties. But her crowning moment was winning one of the night’s biggest awards at the Venus Awards.
Berlin, Germany, was lit last week was a plethora of events, parties, and multiple awards shows. The Venus Awards at Wintergarten Varieté was well attended, with some of the biggest stars from around the world attending. Nominee Sabien DeMonia walked the red carpet in a stunning, curvy-hugging red dress and heels, and she was on hand to accept her award, taking to the stage to thank her biz partner/husband and publicist. She won the Jury Award for Best Webcam Celebrity, and the trophy was topped with a stunning gold bust.
“I’m so honored that the jury awarded me in between so many prestigious names with this special award for Best Webcam Celebrity. And I’m so happy I was at Venus Berlin and the awards this year. I thought signing at the X-Visit and BongaCams and performing multiple times on stage was the most exciting parts of the week in Berlin, but winning this award was definitely the high point,” says Sabien DeMonia.
For a complete list of Venus Awards winners, go to venus-berlin.com/venus-award-show.
To interview Sabien DeMonia for your site, publication, or show, contact Erika Icon of The Rub PR at erika@therubpr.com.
ABOUT SABIEN DEMONIA
Eastern European tatted, busty, red-haired vixen Sabien DeMonia is a content creator, fetish model, adult star, and entrepreneur. Known for her wild scenes, GG breasts, and her even bigger attitude, she’s definitely one to watch. She got her start doing live studio and cam shows for Babestation in the UK. Once Sabien took it to the next level, she worked for some of the most extreme Euro and US studios, including Evil Angel, Fake Hub, Canal +, Alt Erotic, Fake Taxi, Marc Dorcel, Reality Lovers, Czech VR, VR Taboo, Perverse Family, Bikini Fanatics, Legal Porno, Lust Reality, Gonzo.com, AltPorn4U, and more. In 2022, she scored a contract with Kink.com as director and contract star. 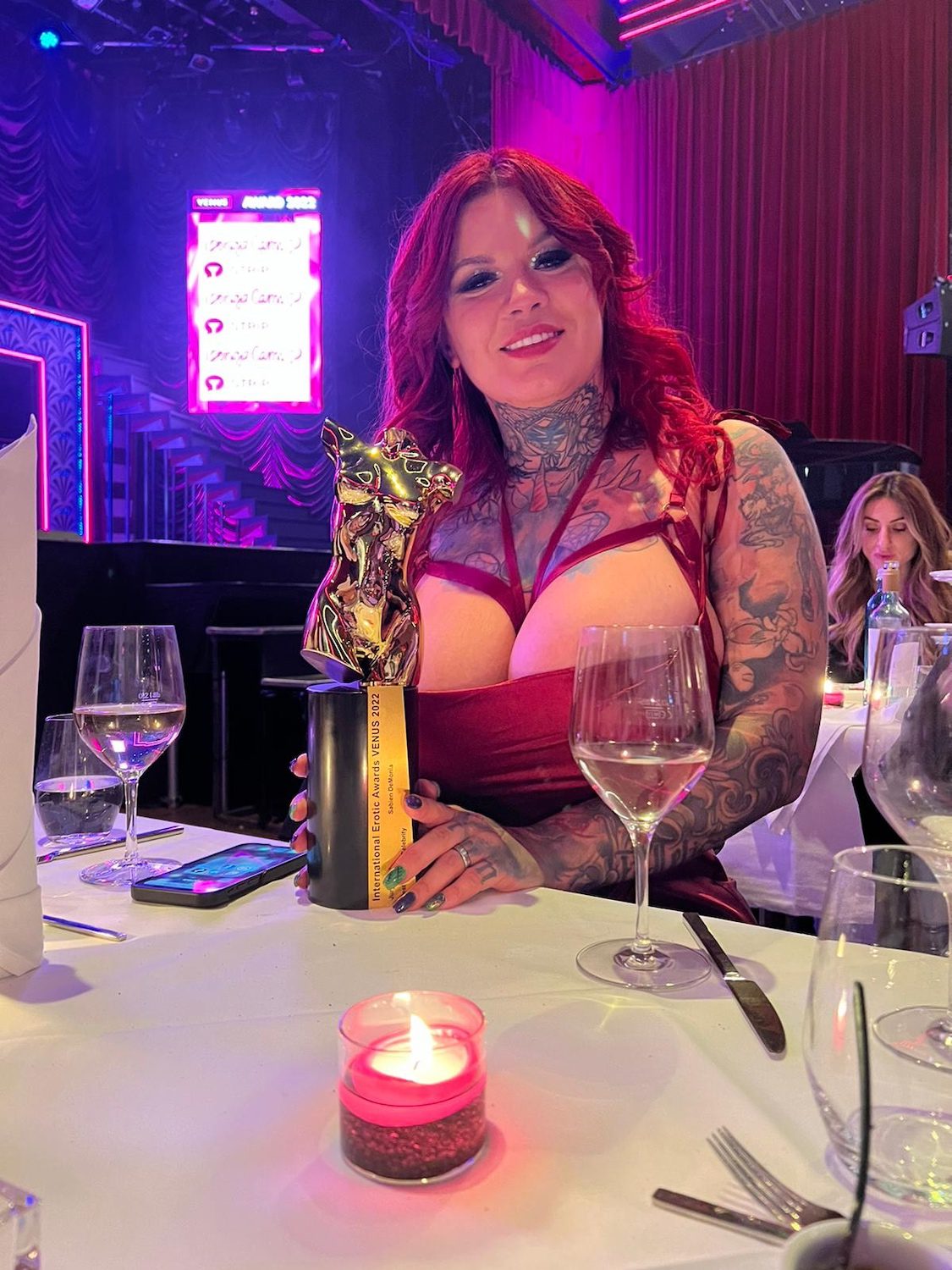 In the past three years, Sabien’s become very well known in and out of the adult industry and scored countless magazine covers and features for worldwide publications like XBIZ, B.A.D.D., Bubble Shake, Inked Barbie, Kink Queens, Femme Rebelle, Tattoo Planet, Tattoo Kultur, Kinkd, and more. She’s won awards for Best Overall Model and Best Porn-Cam Model from Spain’s Ero Awards, Fetish Model of the Year from UK Glamour Awards, Clip Artist of the Year from the Bucharest Summit Awards, Best Live Cam Celebrity of Year from the Live Cam Awards, Best Gothic Shoot and Best Inked Clip from the AltPorn Awards, and MV Munkbung Vid of the Year from the ManyVids Community Awards. Sabien has received numerous nominations from XBIZ Europa, XBIZ Cam, AVN, AltPorn, YNOT Awards, Bucharest Summit, Live Cam, BCAM, YNOT Cam, and Inked Awards. She’s a Brand Ambassador for Hotline, Pineapple Support, and Gaming Adult’s Hentai Heroes, and previously was the first official Cherry.tv Ambassador, as well as representing xxxNifty and SugarBounce.
When she’s not producing content for her platforms or filming for top studios, you’ll find the globetrotting foodie/master chef in her kitchen whipping up culinary delights. Before adult, she was an ALT model and went to art school. She’s also appeared in a Harry Styles music video, appeared on UK’s Channel 5 on “Hotter Than,” and has appeared in The Sun. 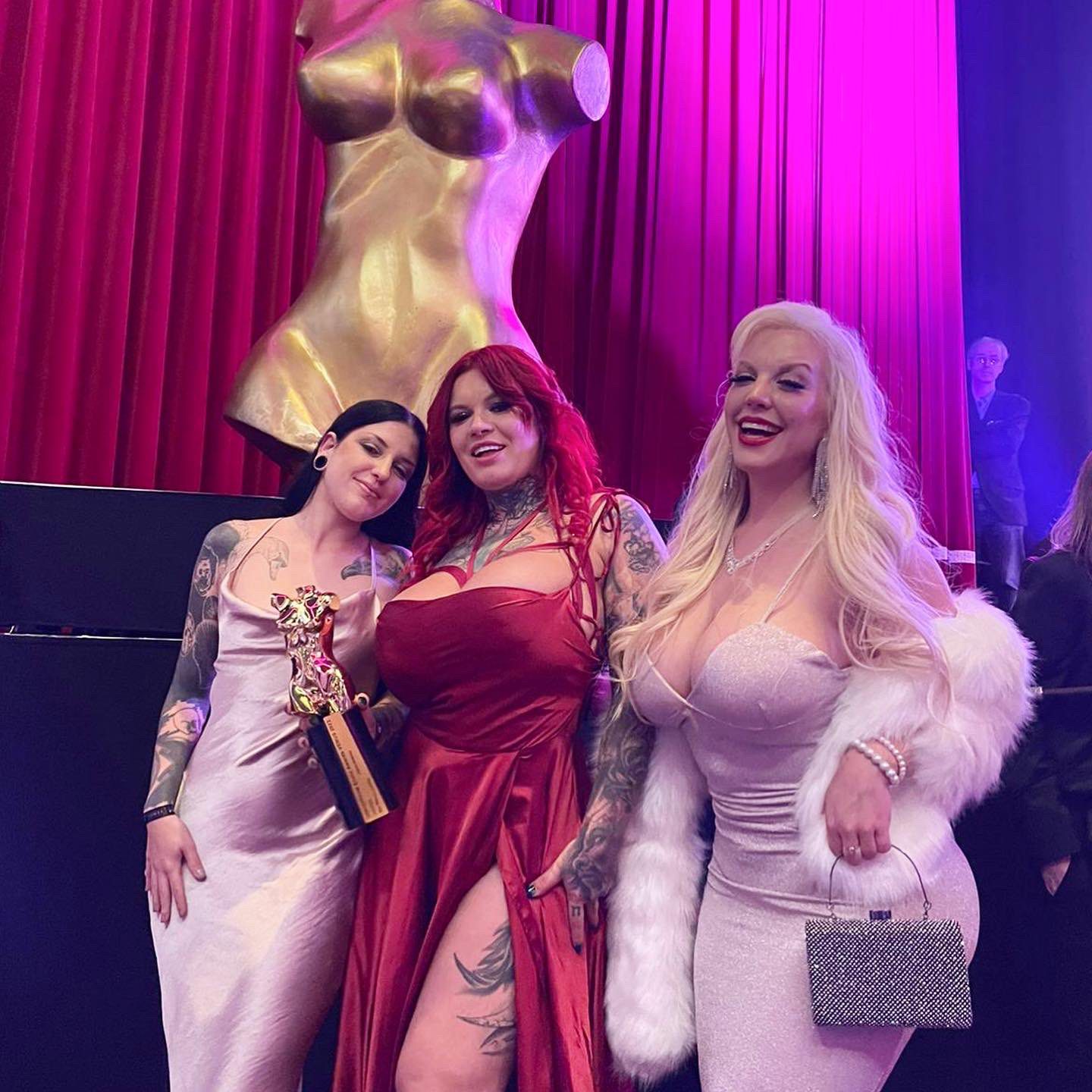