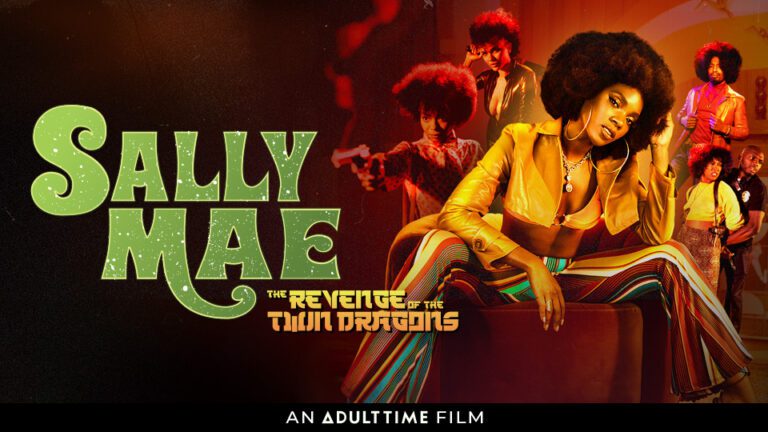 Share
Facebook Twitter LinkedIn Pinterest Email
(Montreal, QC / October 17, 2022) –Director Ricky Greenwood and Adult Time proudly present the October 17 release of “Sally Mae: The Revenge of the Twin Dragons”, the highly-anticipated follow-up to 2020’s award-winning ‘70s blaxploitation homage, “Sweet Sweet Sally Mae”.
Ana Foxxx reprises her role as the tough-as-nails Sally Mae who finds herself in the crosshairs of a murder mystery when gang warfare breaks out and the notorious Blackground family appears to be the target. This time around, Sally Mae will exact her vengeance… once and for all.
“After ‘Sweet Sweet Sally Mae’ left off with a bit of a cliffhanger, we wanted to bring Sally Mae back and give her a satisfying, more complex plotline with plenty of action-packed sequences,” said Greenwood, who is introducing a boy/girl storyline, lighter comedic flair and more special effects and fight scenes “to amp up the intensity and build on the momentum we created two years ago.”
The film also features the return of Misty Stone as Polly and Isiah Maxwell as karate sensei Trevor, and features fresh new faces such as Cali Caliente, Scotty P and Thriller.
“Adult Time acted primarily as a distribution platform for Ricky’s first ‘Sally Mae’ film, for which we had acquired the rights”, says Adult Time’s Director of Marketing Frank Stacy. “This time around, we were involved from the get-go and we are really pleased with the end product. The promotional photos we had for this are among the best I have ever seen and Ana looks absolutely stunning in them. This is a very unique project that we’re sure fans will enjoy!”
Find “Sally Mae: The Revenge of the Twin Dragons” at Adulttime.com/title/sweet-sweet-sally-mae and the AdultTime.com streaming platform, home to more than 340 channels, 60,000 episodes and 8 new releases per day from some of the most recognized and respected studios in the industry.
ABOUT ADULT TIME:
Launched in 2018, Adult Time is a streaming service exclusively for adults. Created by award-winning filmmaker Bree Mills, who also serves as the brand’s Chief Creative Officer, Adult Time is a platform built by fans who believe in a future where mature audiences can safely, securely and proudly have a place in their lineup for premium adult content.
Dubbed the ‘Netflix of Porn’ by mainstream media outlets, Adult Time offers an extensive catalog of more than 340 channels, 60,000 episodes and 8 new releases per day from some of the most recognized studios, including Girlsway, Pure Taboo, Burning Angel, Fantasy Massage, 21 Sextury, and Vivid Entertainment, alongside exclusive original series, feature films, and much more.
For more information, please visit:
http://www.adulttime.com
Follow on Twitter & Instagram:
@adulttimecom
@thebreemills
Media Inquiries:
Brian Gross
BSG PR
818-340-4422
brian@bsgpr.com
# # #
21 Sextury Action Feature adult time alongside exclusive original series Ana Foxxx and Vivid Entertainment burning angel Fantasy Massage feature films girlsway Pure Taboo ricky greenwood Sally Mae Twin Dragons
Share. Facebook Twitter Pinterest LinkedIn Tumblr Email
Previous ArticleBlake Blossom Honored as NightMoves Awards’ Best Female Performer
Next Article OnlyFans Star Emily Mai Keeps Content Flowing, Even During Birth!