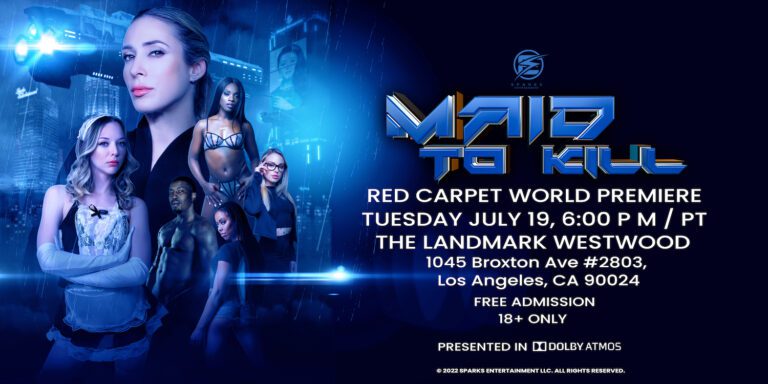 (Hollywood, CA) Sparks Entertainment sparks-entertainment.com, one of the most talked-about cosplay and original content sites, is premiering their latest big-budget feature, Maid to Kill, tomorrow night at the Landmark in Westwood, CA, and space is very limited.

Everyone is talking about the first industry red carpet premiere of 2022, and it’s happening tomorrow night. Sparks Entertainment’s sci-fi and a Hitchcockian thriller set in the future, Maid to Kill, stars Lily Larimar, Aiden Ashley, Kira Noir, Ana Foxxx, Anna Claire Clouds, and Isiah Maxwell. The feature’s stars will be in attendance, as well as producer/writer/director Harry Sparks. Many of the industry’s top stars and rising stars have already RSVPed for the premiere and a few seats are still available.

At 6pm, the evening will kick off with a star-studded red carpet with media from adult and mainstream outlets. Attendees are encouraged to dress to impress. As they enter the theater, they’ll be greeted by a digital version of the movie’s official poster. Once they take their seats, everyone should be ready for movie-making magic that only Harry Sparks can bring. The film will screen at 7:30pm and have a running time of two hours.

Admission to the 18+ event is free, and seating is very limited. To attend, you must RSVP via Eventbrite at eventbrite.com/e/maid-to-kill-red-carpet-movie-premiere-tickets-372284050617. The Landmark Westwood is located at 1045 Broxton Avenue #2803, Los Angeles, CA 90024.

“As the premiere gets closer, the film’s stars and I are getting even more excited. It’s the first industry red carpet premiere in a long time, and the response to attending has been phenomenal. I can’t wait to gauge the industry and fans’ reactions to the film,” says Harry Sparks, award-winning writer, director, and owner of Sparks Entertainment.

Fans who are members of sparks-entertainment.com will be able to view the feature in its entirety in the next few weeks. But for now, they can watch the official trailer at youtube.com/watch?v=dAY6UPu_D_c.

To interview Harry Sparks or the feature’s stars, contact Erika Icon of The Rub PR at [email protected].

In 2012, Sparks made his debut in adult producing, directing, and editing AMK Empire’s coming of age sex comedy/drama, “Revenge of the Petites.” The film won a Golda Kush Award for Feature Film and multiple XBIZ Awards, including Best Cinematography and Best Actress in All-Girl Feature, plus garnered numerous AVN, XBIZ, Venus Awards, XRCOs, Urban X, and Humboldt International/420 Awards noms. His 2013 feature film “The Vampire Mistress,” that blended adult and horror, won Dani Daniels the XBIZ Award for Best Actress in an All-Girl Release and scored eleven 2014 XBIZ Awards and four AVN Awards noms. In 2016, “Beauty & the Beast XXX,” based on the French fairy tale “La Belle et La Bête,” was one of Sparks’ most successful titles, featured an all-star cast, won a NightMoves Award for Best Parody – Editor’s Choice, and was nommed for nine XBIZ Awards and seven AVN Awards.