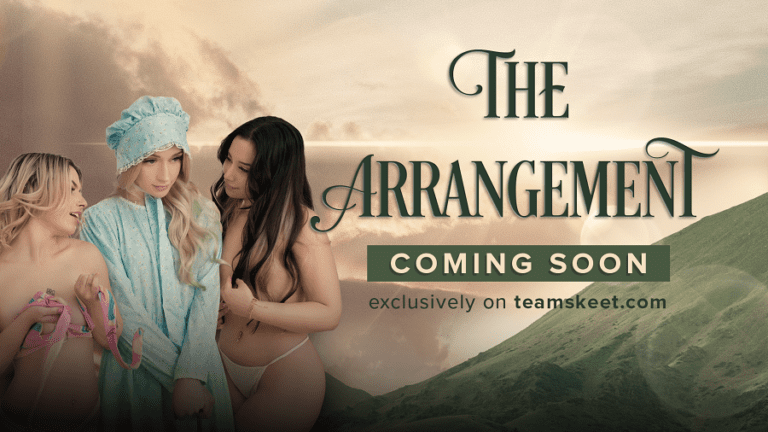 Share
Facebook Twitter LinkedIn Pinterest Email
(Los Angeles, CA / January 13, 2023) — TeamSkeet welcomes its first All-Star of 2023, Emma Starletto, in her very own mini-feature for the famed erotica brand, The Arrangement.
The blonde starlet from Phoenix, Arizona, who celebrated her All-Star status with an introductory interview and special spotlight scene with co-star Calvin Hardy on New Year’s Eve, will kick off her star showcase as follows:
Part One on Teen Pies January 14
Part Two on Perv Doctor January 21
Part Three on BFFS January 25
Part Four on Daughter Swap February 5
Full official extended cut release February 12 on TeamSkeet Features
Starletto plays Emma Miller, an innocent girl from a puritanical community who gets forced into an arranged marriage by her father (Jack Vegas). She tries to get out of it by trying to get pregnant by her stepbrother (Spikey Dee) and runs away from home to the outside world, where she is taken advantage of by a deviant doctor (Mike Mancini) and makes new friends (Aria Lee, Chanel Camryn, Joshua Lewis. Will she make it back to her family or stay in the outside world, ostracized with no way back home to the fold? (Also starring Ophelia Kaan, Adrianna Jade & Clarke Kent).
“We are pleased to welcome you to The Arrangement, where Emma Starletto shines in her spotlight role as a woman at a personal crossroads, unsure of whether to stay a part of her sheltered, controlling family or out in the world with a new lease on life and the unknown,” said a TeamSkeet company rep. “Join us for a new adventure and get to know Emma better as she shines in her most dramatic role yet!”
TeamSkeet, 2022’s Pornhub Award winner for ‘Most Popular Network’, boasts an extensive erotic collection of more than 100 network series and 65 premium series, featuring 8,900+ scenes that highlight the talents of more than 3,300 performers ranging from amateurs to superstars.
Visit TeamSkeet.com and follow on Twitter @teamskeet and Instagram @teamskeetsociety!
# # #
MEDIA CONTACT:  BSG PR / 818.340.4422 / brian@bsgpr.com  / Twitter: @bsgpr
Skinematic Release Starletto TeamSkeet The Arrangement
Share. Facebook Twitter Pinterest LinkedIn Tumblr Email
Previous ArticleVixen Media Group Debuts Star-Studded Crossover Series ‘Hotel Vixen’
Next Article Dominatrix Mistress Carol is this Week’s Guest on Adult Site Broker Talk