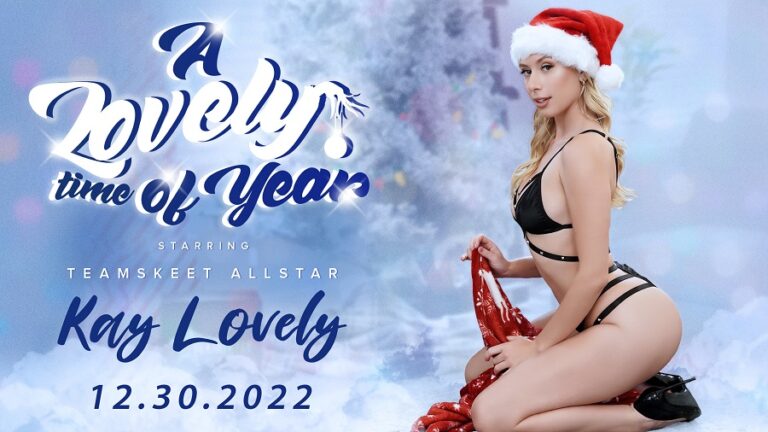 Share
Facebook Twitter LinkedIn Pinterest Email
(Los Angeles, CA / December 16, 2022) — TeamSkeet is celebrating the holidays in style by making spirits bright with an all-new mini-skinematic feature, “A Lovely Time of Year”, featuring December All-Star Kay Lovely.
The TeamSkeet favorite, who has starred in thirteen spotlight titles over the past year ahead of her All-Star designation this month, plays a porn star who has successfully kept her career choices away from her family (Nikki Zee, Tommy Gunn & Oliver Faze) – until now. Will her relationships survive this shocking revelation, or create a different kind of family dynamic altogether?
“We are so pleased to welcome Kay Lovely as our December All Star, and introduce her holiday mini-feature in the same crossover concept as previous TeamSkeet All-Star titles such as Day Dreamer, The Draft and The Summoning,” said a company representative. “Kay is a new talent, but she already has such a devoted fan base on our platform that we can safely say that viewers can look forward to many more titles with this Lovely All-Star in the future!”
A Lovely Time of Year launches in December as a three-part feature with Part One debuting on FreeUse Fantasy – Part Two drops December 17th at TeamSkeet All-Stars and Part Three December 22nd at Family Strokes – with the full feature set for release December 30th on TeamSkeet Features.