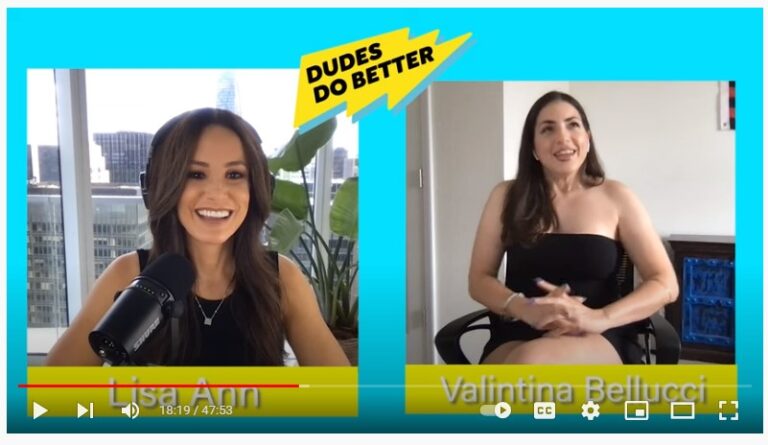 Share
Facebook Twitter LinkedIn Pinterest Email
(Los Angeles, CA / October 28, 2022) — “Valentina Bellucci Shares Her Inspiration”, the latest episode from Lisa Ann’s Dudes Do Better podcast, spotlights the Italian beauty in a revealing interview on YouTube.
Bellucci opened up about her experiences as an expat from Floridia, Italy to Florida, USA – “I moved from Italy when I was just five… I no longer speak Italian, shame!” she laughs – and finding her zen in artistic pursuits like making jewelry. “I love to be surrounded by nature, just peaceful in my comfort zone… not necessarily talking to anyone, just by myself.”
She also discussed shooting original content for her production studio, Step House, which is coming up on its first-year anniversary. “I’ve always wanted to be not only in front of the camera, but also behind the camera because… porn is an art for me, so I like to present it… in an artistic way. I’m kind of old school, so I like porn from the ‘80s and ‘90s.
“With Step House we are trying to explore different genres… we are focusing on the step genre, but we also want to spice it up with different kinds of things… and present it in a normal, artistic way because maybe people don’t say it, but that’s what people want to watch… simplicity is the key, I think, you know?
Bellucci also believes in advocating for women while shooting scenes, as the male-dominated field can be intimidating, especially for new talent. “Without women’s energy, it can get a little overwhelming… my goal is to be present as the director… I just want to be there for the women on set and just talk to them and be as supportive and as helpful as I can be… because I know that that’s what I was missing when I was shooting.”
Enjoy the full Dudes Do Better podcast interview at YouTube.com.
Valentina Bellucci is available for booking through Coxxx Models at Conor@coxxxmodels.com.
Find and follow her and Step House at:
Twitter.com/MrsValentinaXXX
OnlyFans.com/mrsvalentinaxxx
StepHouseXXX.com
Twitter.com/StepHouseXXX
ValentinaBellucci.manyvids.com
Pornhub.com/pornstar/valentina-bellucci
allmylinks.com/valentinabellucci
xvideos.com/pornstar-channels/valentina_bellucci
ABOUT VALENTINA BELLUCCI:
Italian beauty Valentina Bellucci is a bright new talent with an eye on making a name for herself as a respected performer, producer, content creator and studio head for Step House (stephousexxx.com), a brand new erotica imprint and website that highlights the works of adult’s newest amateurs alongside its biggest stars.
Growing up, Bellucci lived in the southern Italian region of Sicily and regularly moved around the U.S. and Europe; she has always considered herself a sexual person who dreamed of one day performing, producing and directing erotica, and gained some early experience as a music video producer while still in Europe before settling permanently in the U.S. – she currently resides in Las Vegas – more than 10 years ago.
In 2020, Bellucci began shooting solo content for adult clip sites as a means of making extra money, and found that she could express herself creatively on her own terms. In early 2021 she started shooting for the industry’s top studios before launching Step House in November.
In her free time Bellucci, an avid fan of the outdoors, can be found in the mountains and deserts of Nevada and California hiking, skiing or off-roading along the winding trails seeking adventure with her two favorite companions, a French bulldog and Cane Corso mastiff.
# # #
Press and media contact:
Brian S. Gross | BSG PR | 818.340.4422 | brian@bsgpr.com | @bsgpr
Dudes Do Better Podcast Las Vegas lisa ann podcast Valentina Bellucci
Share. Facebook Twitter Pinterest LinkedIn Tumblr Email
Previous ArticleTrendy Underwear for Men: The New Collection from Svenjoyment
Next Article Adult Time Pilots Unleashes MILF Overload Three Ways, Starting October 28