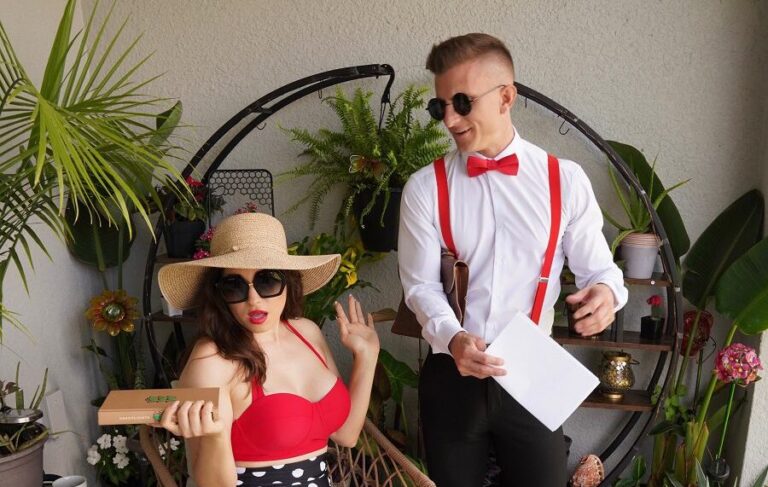 Share
Facebook Twitter LinkedIn Pinterest Email
(Los Angeles, CA / December 20, 2022) — Step House announces the release of its latest scorching scene starring Valentina Bellucci, “Famous Italian Designer Challenges Young American Artist” – available now at StepHousexxx.com.
The Italian beauty plays a famous designer whose peaceful routine is interrupted by an American artist and aspiring fashion designer (Oliver Faze) who wants to earn an internship at the house de la moda of Valentina Bellucci. This ice queen, however, remains unimpressed, which only makes him even more determined to win Valentina’s heart… no matter what lengths he must go to.
Bellucci, who co-owns Step House with partner Mad Vince, added a bit of vintage glamour to the stylish shoot. “We placed a real emphasis on classic style and old-school appeal – my vintage swimsuit, oversized sunglasses and hat, and Oliver’s red suspenders and bow tie – in order to highlight and project a colorful visual setting that pops on the screen,” she said.
She also lauded Faze’s performance in his Step House debut: “Oliver is absolutely perfect as the over-eager achiever who wears you down and won’t give up until he gets what he wants, while I ignore him, tell him no, act rude – it was a fun, relaxed shoot and I hope to see Oliver again soon for another Step House project.”
To enjoy “Famous Italian Designer Challenges Young American Artist” and other Step House erotic titles, join StepHousexxx.com
Valentina Bellucci is available for booking through Coxxx Models at Conor@coxxxmodels.com.
Find and follow her and Step House at:
Twitter.com/MrsValentinaXXX
OnlyFans.com/mrsvalentinaxxx
StepHouseXXX.com
Twitter.com/StepHouseXXX
ValentinaBellucci.manyvids.com
Pornhub.com/pornstar/valentina-bellucci
allmylinks.com/valentinabellucci
xvideos.com/pornstar-channels/valentina_bellucci
ABOUT VALENTINA BELLUCCI:
Italian beauty Valentina Bellucci is a bright new talent with an eye on making a name for herself as a respected performer, producer, content creator and studio head for Step House (stephousexxx.com), a brand new erotica imprint and website that highlights the works of adult’s newest amateurs alongside its biggest stars.
Growing up, Bellucci lived in the southern Italian region of Sicily and regularly moved around the U.S. and Europe; she has always considered herself a sexual person who dreamed of one day performing, producing and directing erotica, and gained some early experience as a music video producer while still in Europe before settling permanently in the U.S. – she currently resides in Las Vegas – more than 10 years ago.
In 2020, Bellucci began shooting solo content for adult clip sites as a means of making extra money, and found that she could express herself creatively on her own terms. In early 2021 she started shooting for the industry’s top studios before launching Step House in November.
In her free time Bellucci, an avid fan of the outdoors, can be found in the mountains and deserts of Nevada and California hiking, skiing or off-roading along the winding trails seeking adventure with her two favorite companions, a French bulldog and Cane Corso mastiff.
# # #
Press and media contact:
Brian S. Gross | BSG PR | 818.340.4422 | brian@bsgpr.com | @bsgpr
Oliver Faze’s Valentina Bellucci
Share. Facebook Twitter Pinterest LinkedIn Tumblr Email
Previous ArticleTransfixed Rolls Out the Red Carpet for December’s Holiday ‘MUSE’, TS Foxxy
Next Article Fans Utopia Lists 35 Intimate Items for Sale from Aussie Superstar Savannah Bond