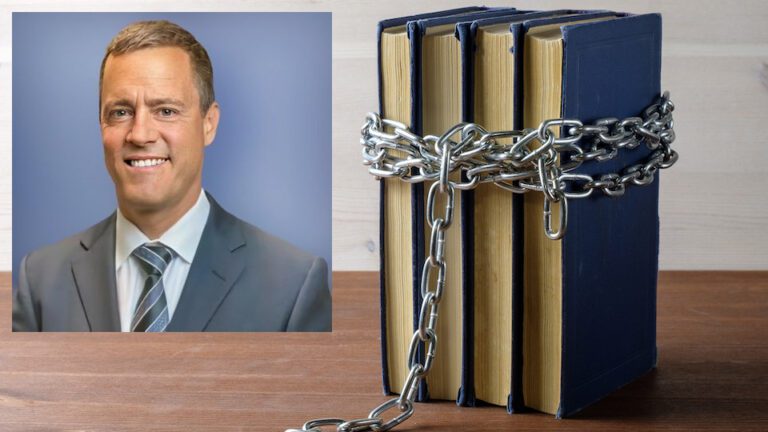 VIRGINIA BEACH, Va. — Two Republican politicians in Virginia revived an obscure anti-pornography law that hasn’t been invoked in decades to ask a judge for a restraining order that would prevent Barnes & Noble from selling certain books the lawmakers find objectionable to minors.

Anderson bragged to the Washington Post that he had “discovered a dusty section of Virginia law that had not been invoked since the 1970s, when it was wielded against pornography,” after fellow Republican politician Altman allegedly “engaged his law firm and asked for legal means to limit access” to “Gender Queer” and “A Court of Mist and Fury.”

Back to that ‘Crimes Against Decency’ Era

Anderson referred to title 18.2 of the Code of Virginia, under the rubric “Crimes Involving Morals and Decency: Obscenity and Related Offenses.”

The Virginia law allows “any citizen” or the attorney for the Commonwealth of any county or city, or city attorney, to request a judge for “adjudication of the obscenity” of any book that they may have “reasonable cause to believe” may be “obscene.”

The citizen only has to name or describe the book, allege its “obscene nature” and list “the names and addresses, if known, of the author, publisher, and all other persons interested in its sale or commercial distribution.”

According to the Washington Post, Virginia state code “defines something as ‘obscene’ if it appeals ‘prurient interest in sex,’ goes ‘substantially beyond customary limits of candor in description or representation’ and lacks ‘serious literary, artistic, political or scientific value.’”

Anderson says he is seeking “a modified version of the obscenity ruling,” seeking that the two books in question be ruled “obscene only for minors.”

“If he is successful in his suit,” the Washington Post explained, “it will become illegal for minors to check out those books in Virginia Beach school libraries or buy them at the two Barnes & Noble bookstores in Virginia Beach.”

On May 18, Anderson posted an order on Facebook, apparently signed by Virginia Circuit Judge Pamela S. Baskervill — who supposedly retired in 2014 — allowing his obscenity claims to move forward.

“I am pleased to announce a major legal victory,” Anderson wrote. “Today, the Virginia Beach Circuit Court has found probable cause that the books ‘Gender Queer’ and ‘A Court of Mist and Fury’ are obscene to unrestricted viewing by minors.

“My client, Tommy Altman, has now directed my office to seek a restraining order against Barnes and Noble and Virginia Beach Schools to enjoin them from selling or loaning these books to minors without parent consent,” he said. “We are in a major fight. Suits like this can be filed all over Virginia. There are dozens of books. Hundreds of schools.”

The American Booksellers for Free Expression (ABFE) issued a statement strongly condemning retired Judge Baskervill’s tentative opinion that the books might be “obscene for unrestricted viewing by minors.”

“The last time a book was banned for being ‘obscene’ was in the 1960s,” the ABFE pointed out. “Then, in 1973, the Supreme Court provided a three-question test to determine if a particular material is obscene: Whether the average person, applying contemporary community standards, would find that the work, taken as a whole, appeals to the ‘prurient interest;’ whether the work depicts or describes, in a patently offensive way, sexual conduct; and whether the work, taken as a whole, lacks serious literary, artistic, political or scientific value.”

The ABFE was founded in 1990, they wrote, “in part because the Meese Commission on Pornography spurred state legislation to control sexual explicit materials, which threatened bookstores’ ability to sell legal materials in their bookstores.”

For free speech advocates, Baskervill’s opinion is “troubling in that the order could threaten the First Amendment right of a bookseller to sell a book, and that it does so based on the subjective point of view of a few citizens — one of whom in this particular instance is running for office.”

Regardless of Anderson’s claim that his action only concerns minors, the ABFE correctly clarified that Baskervill has “ordered the authors and publishers of the books to present more evidence so that she can make a final decision regarding whether the books may be sold or possessed in Virginia, by either minors or adults.”