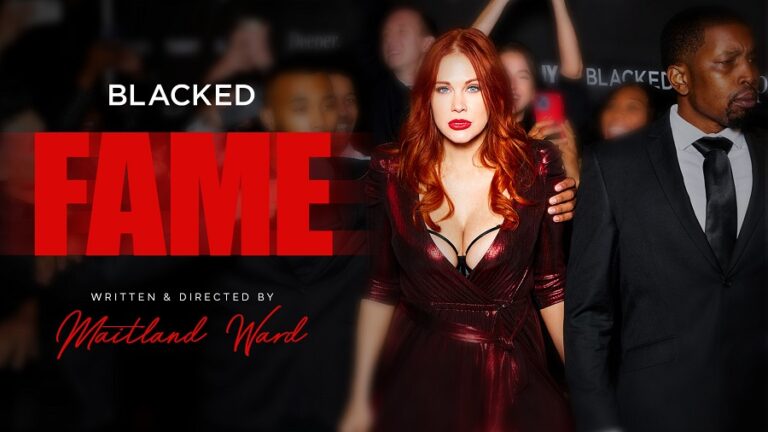 Share
Facebook Twitter LinkedIn Pinterest Email
From Hollywood to triple-X stardom, the star’s new scene will be available exclusively on BLACKED
LOS ANGELES (Dec. 20, 2022) — Vixen Media Group, the leader in luxury adult entertainment, announced an electrifying new scene “Fame” — written and directed by the adult industry’s brightest star, Maitland Ward, released on it’s leading luxury brand BLACKED.com this past weekend. The provocative scene depicts Maitland’s real-life experiences as a famous actress and her encounters with paparazzi, who notoriously strip celebrities of their privacy.
“Fame” represents the first scene ever written & directed by Maitland, and she also stars in it, opposite heartthrob Isiah Maxwell. During her time with Vixen Media Group, Maitland has delivered passionate scenes and award-winning content year-after-year. Today she’s recognized as one of the most respected stars in the adult industry and is excited for the opportunity to play an important role behind the camera.
“Stepping behind the camera was truly a thrill for me and an accomplishment I’m immensely proud of,” said Maitland. “Being able to write and create my own scene on the site where it really all started for me in the world of adult entertainment was such a thrill and something of a challenge I devoured. There really is nothing like seeing the words you put on a page come to life.”
Maitland’s passion for writing continues to grow, as the new scene comes on the heels of the recent release of her first book, Rated X: How Porn Liberated Me From Hollywood. The tell-all memoir takes a sex-positive, behind-the-scenes look at both Hollywood and the adult entertainment industry.
I am so proud of Maitland and everything she’s done for and within our industry. Says VMG Director, Kayden Kross.  “Writing and directing her own scenes is a very natural progression and one that I’ve been excited to see from her for a long time. This script is an excellent example of her talents as a writer and the first of what I hope will be many in the future!”
Maitland added, “The team at Vixen was so incredible and I was so fortunate to have the best in the business behind me. Kayden has especially been encouraging for me to create my own projects and I’ve learned so much from her, watching her create from behind the lens. I look forward to doing more and more in 2023. Sitting down to write this scene was such a labor of love (and Lust) for me and having Isiah, who I filmed some of my very first adult content ever with, play opposite me just made it perfect.”
Viewers can watch the enticing scene on BLACKED. Be sure to follow BLACKED on Twitter and Instagram for exclusive updates on “Fame” and unexpected surprises to come. To learn more about Vixen Media Group, visit  vixengroup.com.
About Vixen Media Group
Founded in 2014, Vixen Media Group is the premier online destination for exclusive and luxury adult content. Featured in Rolling Stone, Forbes, The Daily Beast, BuzzFeed, Men’s Health, Vice and other outlets, Vixen Media Group’s network of branded websites have more than 30 million visitors each month with more than nine million Instagram followers. Its innovative studios – Vixen, Blacked, Tushy, Deeper and Slayed – have earned more than 100 awards. To learn more, visit vixengroup.com.
About BLACKED
The first brand launched by Vixen Media Group, Blacked has a worldwide fanbase that includes the hip-hop artist Kanye West, who gave the studio a shout out during a 2018 guest appearance on “Jimmy Kimmel Live!” Favored for its urban themes and authentic storylines, Blacked has won numerous industry awards for its artfully-shot movies that take erotic storytelling to the next level. Blacked has nearly 3 million followers on Instagram and its own spinoff studio: Blacked Raw, which is well-known for its edgy, moodily-shot depictions of raw, uninhibited sexuality.
###
BSG PR
Brian Gross
818-340-4422
brian@bsgpr.com
@bsgpr
Directorial Debut fame Maitland Ward Vixen Media Group
Share. Facebook Twitter Pinterest LinkedIn Tumblr Email
Previous ArticleVixen Media Group Debuts New Scene, ‘Seal the Deal,’ with Azul Hermosa on Tushy.com
Next Article Roger T. Pipe of Rog Reviews is this Weeks Guest on Adult Site Broker Talk