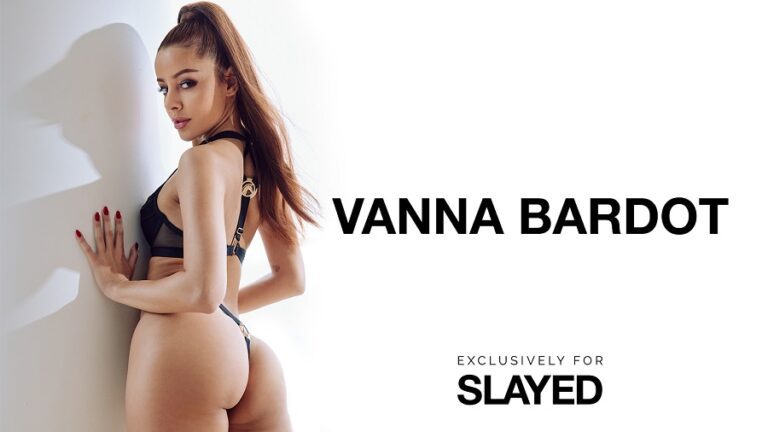 Share
Facebook Twitter LinkedIn Pinterest Email
LOS ANGELES (Sept. 27, 2022) – Vixen Media Group (VMG), the leader in luxury adult entertainment, today announced that the company has signed AVN award winning Vanna Bardot, exclusively for productions on its all-girl brand, SLAYED.
Her newest scene, Gloss, debuted on September 20th. The intimate performance with Lika Star, represents Vanna’s 14th scene with VMG since she got her start with the company in 2019. Her work has also been featured on the studio’s other innovative brands – Blacked, Blacked Raw and Deeper.
“I’ve always deeply admired everything that VMG produces. When I heard SLAYED was going into production, I was more than just excited. I knew that it would be next level,” said Vanna. “To be a part of the initial launch of the site was such an honor, but when I was asked if I would be interested in becoming an exclusive SLAYED contract star, I couldn’t believe it. ‘Thrilled’ would be an absolute understatement. I feel so incredibly happy and proud to represent such an iconic brand. I can’t wait for everyone to see what’s to come soon!”
As a result of her exceptional performances with VMG, Vanna has been recognized for her talents by the adult industry’s best through various awards, including: AVN’s 2021 Best Solo/Tease Performance for a scene with Deeper, AVN’s 2022 Best Three-Way Sex Scene for a Deeper scene shot with Avery Cristy and Oliver Flynn, and AVN’s 2022 Best Girl/Girl Scene for a SLAYED performance with Emily Willis.
“Vanna Bardot is a highly regarded top model in the adult industry and an absolute fan favorite,” said Mike Moz, casting director for VMG. “It’s an honor to have an A-lister like Vanna sign exclusively with SLAYED to take its all-girl scenes to new levels with her creative energy. Between her bold passion and confident, sexual performances, she provides another layer of chemistry to SLAYED’s scenes and we look forward to contributing towards her continued success.”
Be sure to follow SLAYED on Instagram and Twitter for regular updates, and follow Vixen on Twitter and Instagram for all the latest exclusive news. To learn more about Vixen Media Group or sign up for an indulgent experience, visit  vixengroup.com.
About Vixen Media Group
Founded in 2014, Vixen Media Group is the premier online destination for exclusive and luxury adult content. Featured in Rolling Stone, Forbes, The Daily Beast, BuzzFeed, Men’s Health, Vice and other outlets, Vixen Media Group’s network of branded websites have more than 30 million visitors each month with more than nine million Instagram followers. Its innovative studios – Vixen, Blacked, Tushy, Deeper and Slayed – have earned more than 100 awards. To learn more, visit vixengroup.com.
###
Vanna Bardot Vixen Media Group
Share. Facebook Twitter Pinterest LinkedIn Tumblr Email
Previous ArticleConor Coxxx’s Musical Project The Holdings Earns Spot in Relix Magazine’s Digital Artist Sampler
Next Article Hurricane Ian gets nasty quickly, turbocharged by warm water