Maitland pulls back the curtain to give fans a behind-the-scenes look at life in Hollywood and adult entertainment in captivating, celebrity memoir 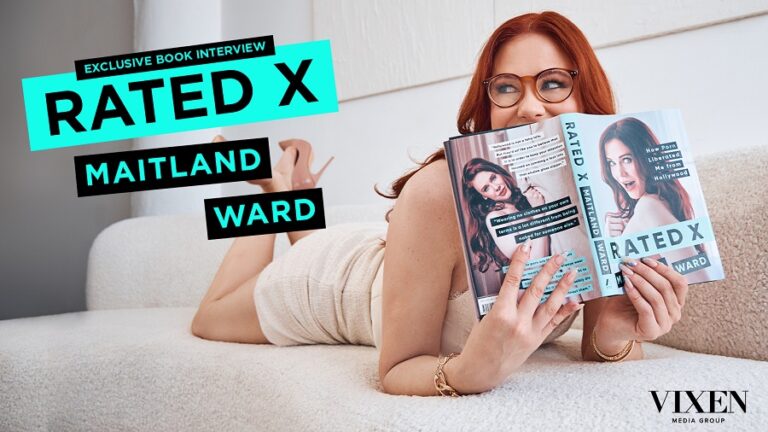 Share
Facebook Twitter LinkedIn Pinterest Email
LOS ANGELES (Sept. 6, 2021) – Vixen Media Group, the leader in luxury adult entertainment, announced today the company’s exclusive contract star, Maitland Ward, has released her first book, RATED X: How Porn Liberated Me from Hollywood. The highly anticipated memoir provides a sex-positive, behind-the-scenes look at both Hollywood and the adult entertainment industry. From sitcom secrets on mainstream sets to passionately public sex scenes with Vixen Media Group, Maitland reveals exclusive details about her transcendent career and road to triple-X stardom in this sharp, provocative tale.
Officially on shelves now, the book tells Maitland’s fascinating story about her transition from America’s sweetheart in mainstream Hollywood roles onto being one of the most-respected actresses in the adult industry through her unforgettable work with Vixen Media Group.
“VMG has been such a huge part in my journey and my story in this book. I have had such an amazing experience with them starting with my first Blacked scene that broke all records and then Drive which catapulted me to award winning fame and now to starring in Drift which is a brilliant script directed by my collaborating partner Kayden Kross,” said Ward “Readers will really see what an original, heartfelt journey Kayden, Vixen and I have been on. My story couldn’t have fully flourished without their belief in me and support.”
As 2022 XBIZ Performer of the Year, Maitland models and performs exclusively with Vixen Media Group and has been the face of Deeper.com for three years running. Her collaborations with the leader in adult entertainment on projects – such as Drive, Muse and Mistress Maitland – have resulted in award after award and recognized by industry players as some of the most dynamic films the industry has seen to date.
“I am beyond proud of Maitland’s success as both an actress and now a published author. I remember a conversation from our first year working together, I knew then she would have a book. Maitland is an incredible writer–funny, humble, unfiltered, and an amazing talent at weaving these things together into something that doesn’t just sit on the surface,” said Kross. “She provides a fresh perspective and sex-positive light for the adult industry. Her book is a beach read, a college read, a secretive flushed read after everyone has gone to bed. Watching this project develop from germination to completion has been one of the highlights of my career in adult. Rated X represents a first for the business and the only memoir to be published by a Vixen Media Group star. This is an incredible milestone and we’re thrilled to celebrate this moment with the recent release of Drift – a five-part feature on Deeper that runs parallel to Rated X and Maitland’s personal story.”
To learn more about Maitland’s memoir and her unbelievable journey with Vixen Media Group, watch her exclusive interview at https://www.maitland.vmg.studio/. For more information about Vixen Media Group and to keep up with the latest company news, visit vixengroup.com or follow Vixen on Instagram.
About Vixen Media Group
Founded in 2014, Vixen Media Group is the premier online destination for exclusive and luxury adult content. Featured in Rolling Stone, Forbes, The Daily Beast, BuzzFeed, Men’s Health, Vice and other outlets, Vixen Media Group’s network of branded websites have more than 30 million visitors each month with more than nine million Instagram followers. Its innovative studios – Vixen, Blacked, Tushy, Deeper and Slayed – have earned more than 100 awards. To learn more, visit vixengroup.com.
###
BuzzFeed Forbes Maitland Ward Men's Health Rolling Stone The Daily Beast VICE Vixen Media Group
Share. Facebook Twitter Pinterest LinkedIn Tumblr Email
Previous ArticleReality Kings Releases New Scene Starring Lila Lovely and Jimmy Michael
Next Article Transfixed Smooths Out the Kinks in “Ease Your Stress”