2 Russians, 1 America Kicks Off with Week of High-Flying Festivities 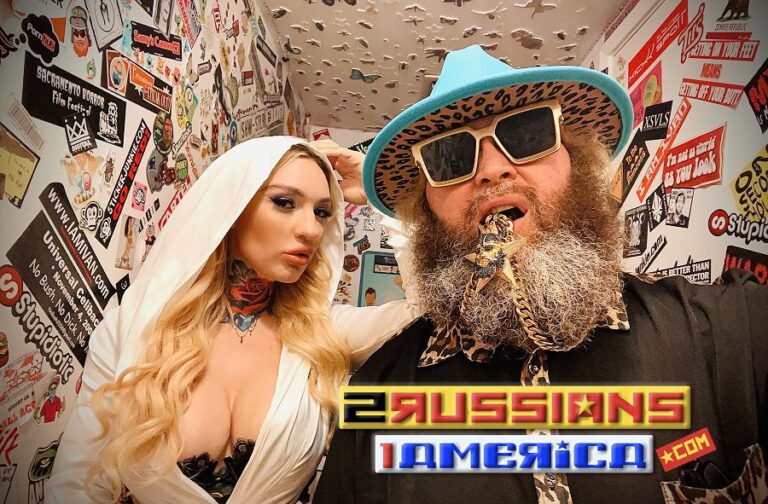 2 Russians, 1 America will kick off its new schedule with adult superstar Christy Mack, and fans can expect more unique stories, personal interviews and an open forum that highlights Ivan and Misha’s offbeat and unexpected interests within the entertainment space (every Tuesday & Saturday).

Wednesdays are devoted to Ivan and Misha’s short & sweet no-edit, one-shot clips, Drive-Thru – “a day in the life” video stories told from quick clips straight from their smartphones, while Fridays are devoted to VR – Virtual Russians – with an eye-popping array of original virtual clips, and “Confessional Sundays” will focus on fan/hate mail, answering questions and much more.

“We have wanted to bring our 2 Russians, 1 America to fans for a while now, but our busy schedules have kept us from moving forward with the project,” said Ivan. “But now we are settling into a weekly routine of shows that will spotlight interesting people, places and topics that color our world in the best possible way.”
Montana added, “What we are putting together to share with the world is nothing less than our heart, blood and tears. We want to show the human side of who we are, how wonderful our lives are, but also how volatile it can be as well. I cannot wait to continues to share our journey with the world.”

The podcast is currently on the lookout for like-minded collaborators and sponsors that would like to tell their tales, share their experiences and promote their latest ventures – the two will even review new and interesting products that are taking the entertainment industry by storm.

Get to know Ivan and Misha Montana at:

ABOUT MISHA MONTANA:
Raven-haired (but blonde for now!), pale-skinned and covered in tattoos, Misha Montana (aka Xeno Kitty) represents the ideal model of the Millennium. The Nevada native of Russian descent is not only one of the adult industry’s fastest-rising performers, she is also the Chief Brand Officer, Production Manager and in-house director for Alt Erotic, an award-winning alternative lifestyle adult film brand.
From her Xenomorph face-hugger alien tattoo on her pussy that was documented in an AltErotic scene to making adult and mainstream headlines in 2021 for her stroke and getting engaged to her partner in crime, Ivan, on the red carpet during the AltPorn Awards, Misha consistently makes history as a creative artist on the rise.
The exotic beauty started adult modeling in 2008, and after college, where she double-majored in Psychology and Political Science, she launched her adult film career full-time in 2020, with spirited performances for AltErotic.com and other high-profile studios. In her spare time, Montana and Ivan also co-host 2Russians1America.com, their new YouTube channel.
# # #
Press and media contact:
Brian S. Gross | BSG PR | 818.340.4422 | brian@bsgpr.com | @bsgpr
1 America 2 Russians Christy Mack Ivan Misha Montana
Share. Facebook Twitter Pinterest LinkedIn Tumblr Email
Previous ArticleMore Series, More Stars: Come Get Your Carnal Fix at TeamSkeet
Next Article Emily Adaire Scores Her First Fleshbot Awards Nomination