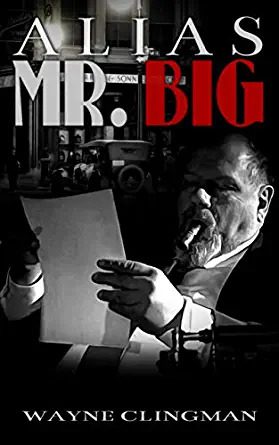 Mr. Big, a veteran of The Great War whose turned mob boss in the Prohibition era, is running an illegal alcohol business by night, operating a playhouse by day, and seducing Belle City’s sexiest broads on the side. The plot is loose, but the dames are looser.

Find out what happens when the brunette flapper-turned-wannabe-actress has her turn on Mr. Big’s “casting couch” – how far will she go to get the lead role in Big’s newest play? Finally, Mr. Big turns up the heat on his number one competitor: a large-breasted redhead who’s too savvy for her own good – will the situation get too hot to handle?Last but far from least, once you’ve finished the fictional story, Alias Mr. Big includes an in-depth glossary in the back of the book, thoroughly covering early 1920’s slang.

Wayne Clingman is a long time fan of history, both the kind they teach in school and the history “they” want kept hidden. Wayne lives in a 115 year old home in Racine, Wisconsin, with his wife, Barb, four Alaskan Malamutes, and a Cat that controls his life. Wayne is the producer of Milwaukee Mafia – Frank Balistrieri.

From a book on the Mafia in Milwaukee, to a series of books on Vegas Table Games, (Mr. Big Talks ) I hope you can find one of my books to read enjoy and maybe hit it big in Vegas !